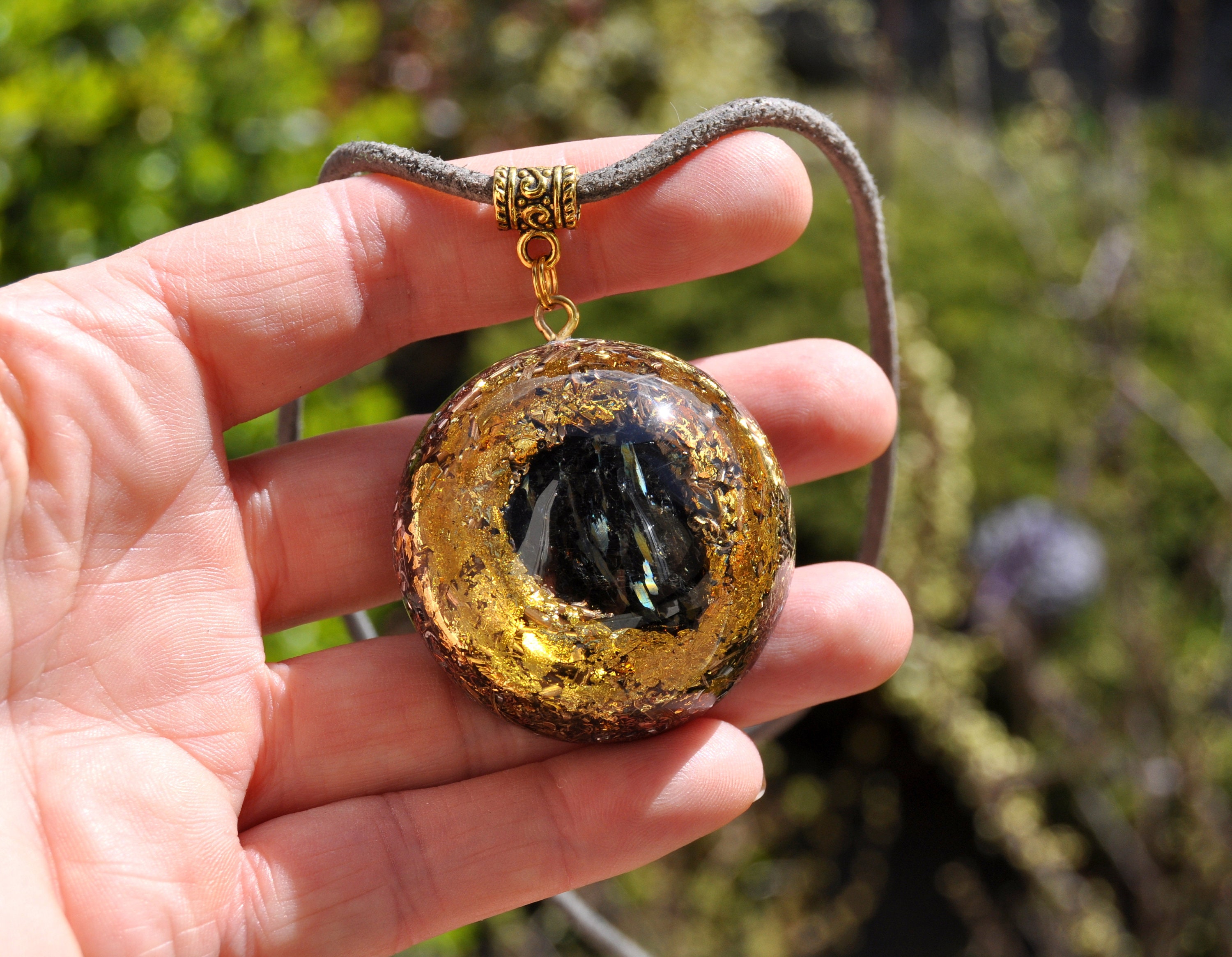 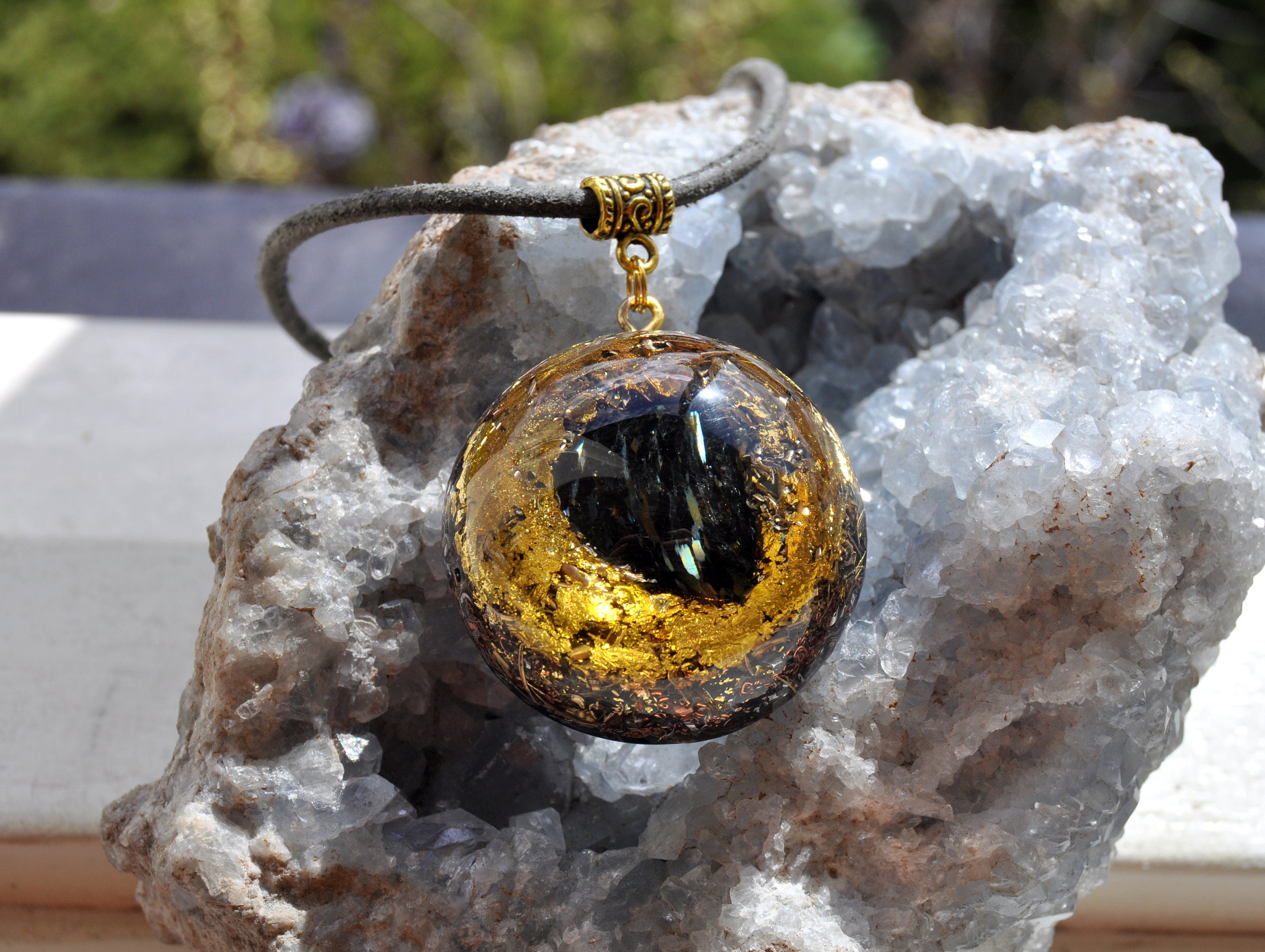 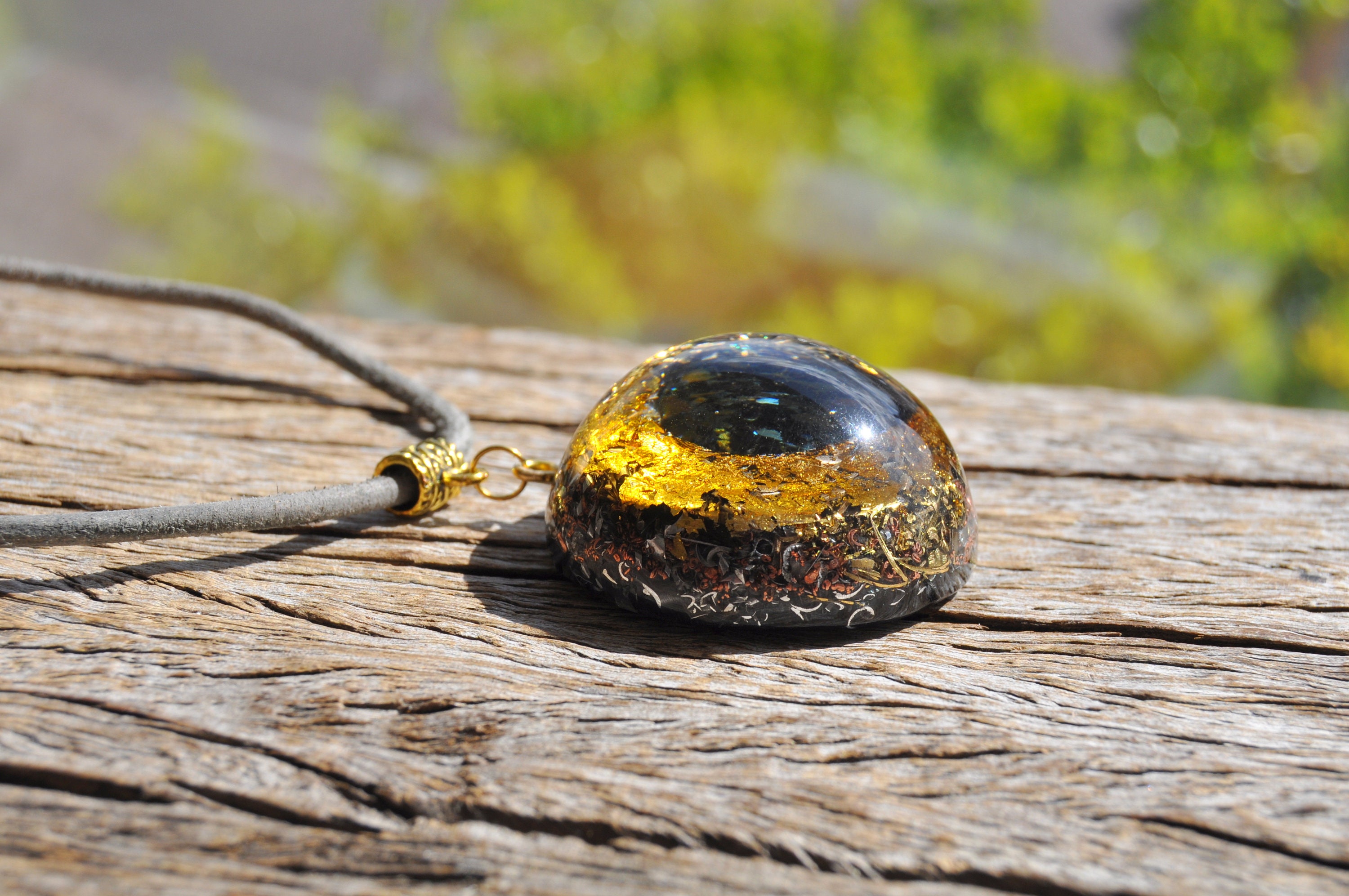 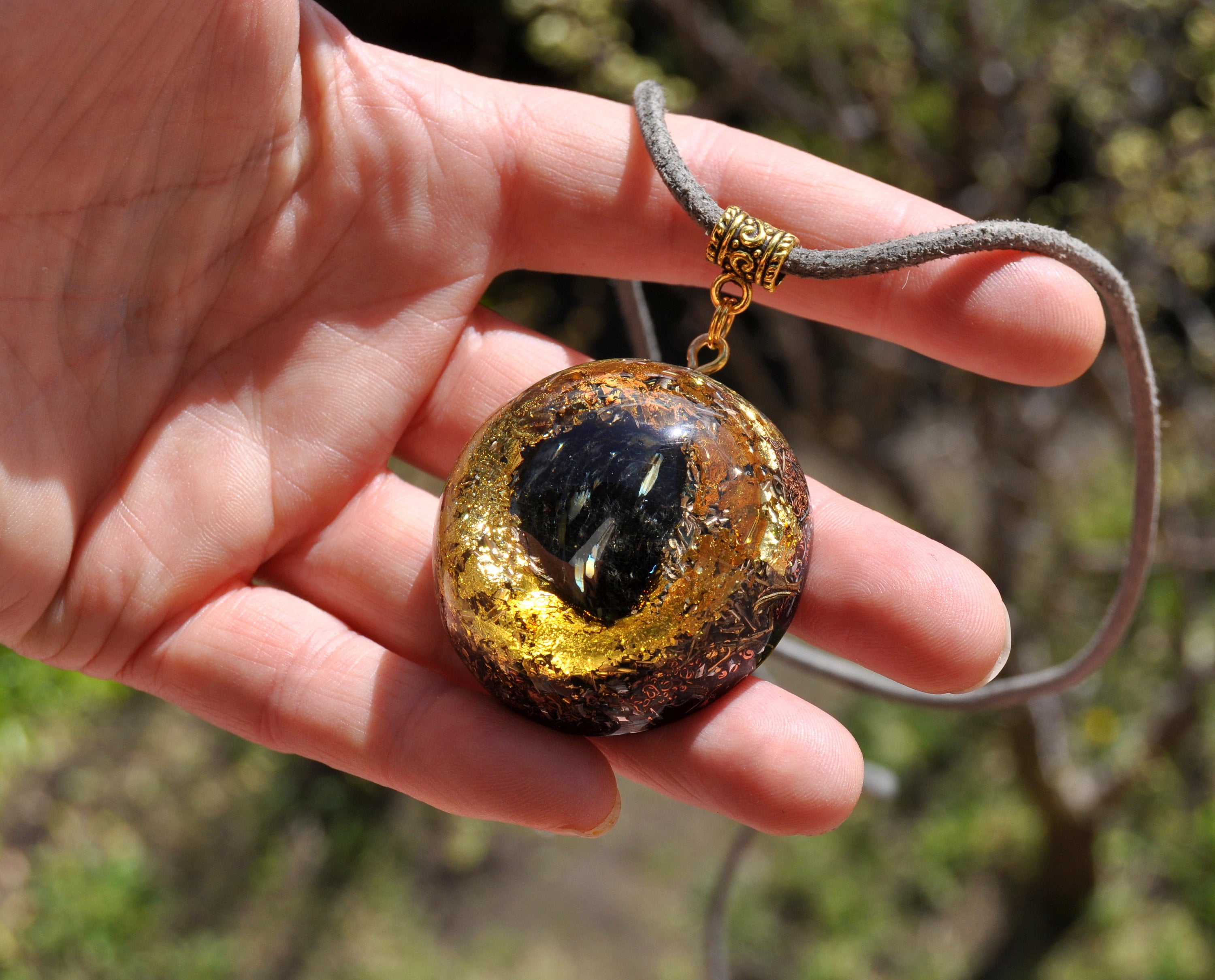 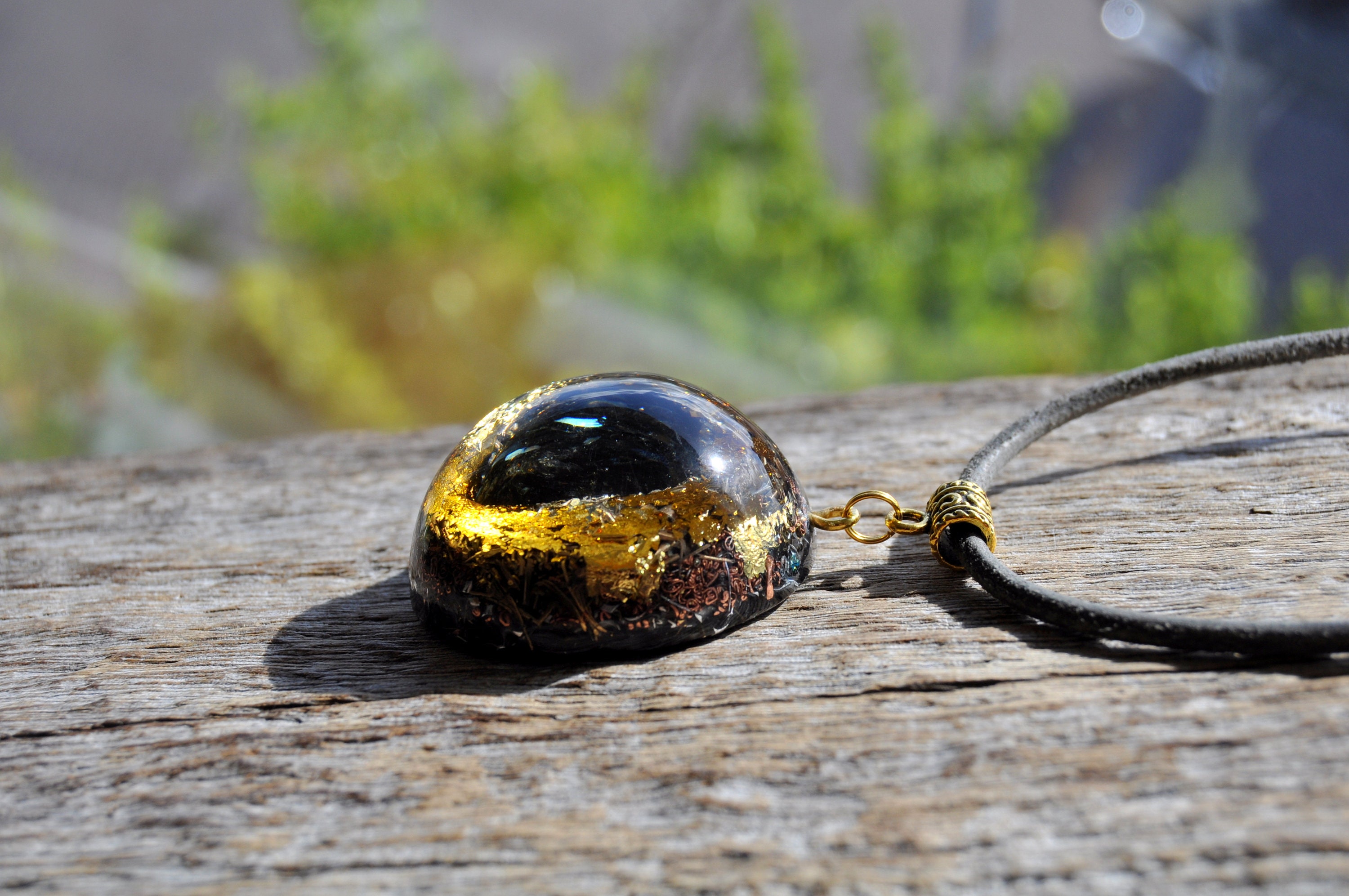 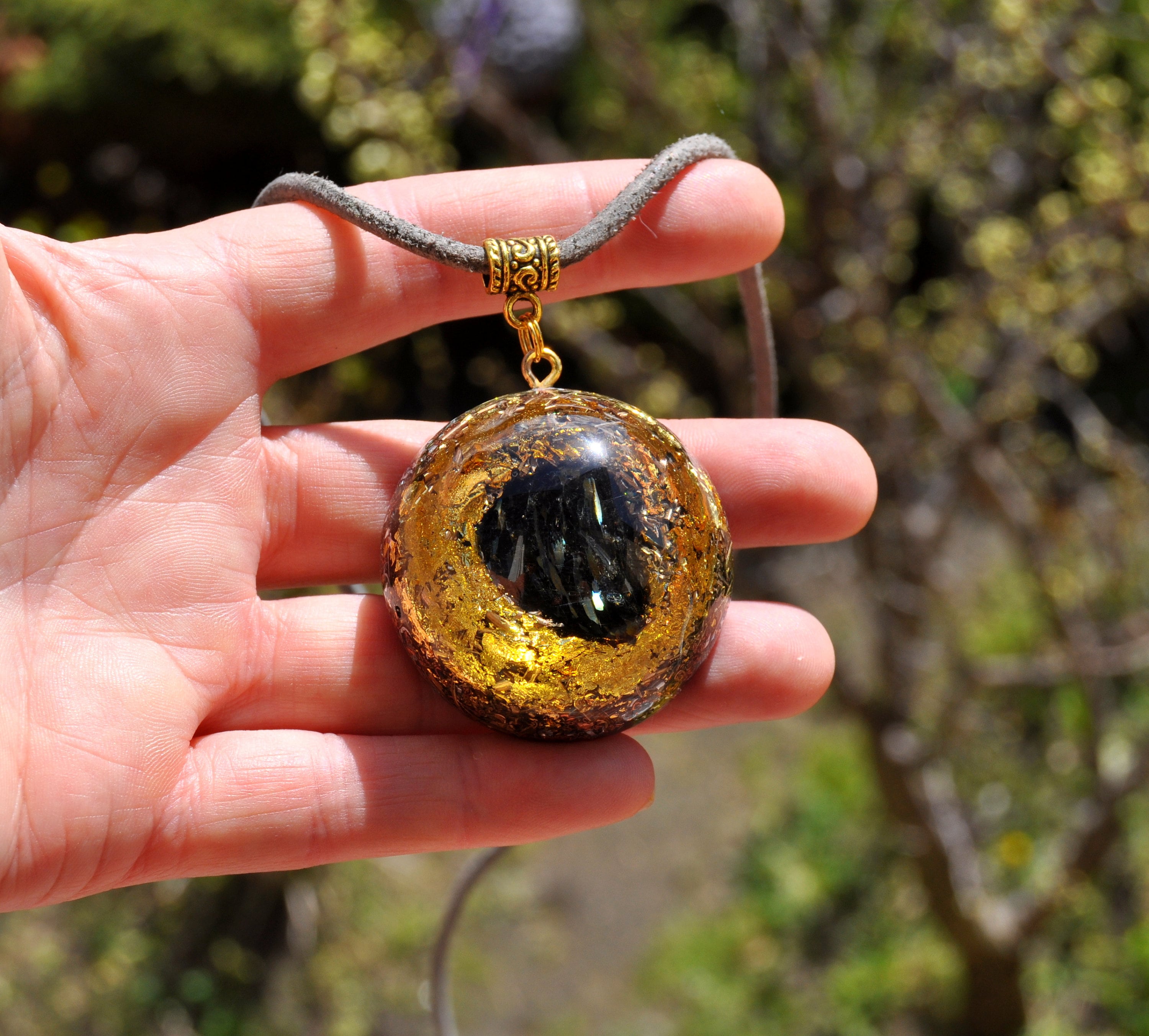 This unique 4.1 cm / 1.61" in diameter pendant is made out of lots of various metal shavings and features a large genuine Greenland Nuummite with blue and gold flashes which is surrounded with 24k Gold and furthermore it consists of Rose Quartz (self - love), black Tourmaline (to protect and ground excess energy) , Elite Shungite (EMF protection), Selenite (to clean and charge the other crystals), Rhodizite (to amplify the other crystals) and clear quartz (for piezo-electric effect) all within a durable resin setting.

Nuummite is a rare metamorphic rock that consists of the amphibole minerals gedrite and anthophyllite. It is named after the area of Nuuk in Greenland, where it was found.
Nuummite from Greenland predominantly has golden, blue and rarely red Anthophyllite needle-like crystals. Due to the extreme harsh weather of this country, this mineral is only capable of being mined a few months out of the year when the ground is not frozen.

Nuummite is a 3 billion year old protection crystal that has experienced Earth’s transformation through time!

Nuummite has a potent vibration, and has become known as The Sorcerers Stone. Once you begin to resonate with its powerful energy you may understand why. This is an ancient stone that embodies strong metaphysical properties. Within this dark stone is a strong element of the magical and mystical vibration of the earth.
If you use it, this may help you to attune yourself with deep earth energy. By attuning yourself with earth energy and the elemental forces and elemental beings, you can add to the positive energy within your life.

It has a deeply felt resonance that is an extraordinary aid to move your spiritual growth forward quickly.

Nuummite works towards bridging the spiritual and physical realms together, providing a channel for higher knowledge and transformative energy to grow and prosper. This stone helps unlock one’s third eye and activate your own unique psychic abilities. Inner vision of one's past lives, as well as messages from your guardian angels and spirit guides coming through to you during dreams or intense meditation sessions are fairly common when initially working with Nuummite. Try placing this stone over your third eye and allow the stones energy to directly be absorbed into your pineal gland. Pulsating vibrations will soon begin to imbue your entire body and elevate one’s entire consciousness. This mineral holds the key to many of Earth’s secrets, as well as the life that once existed on this planet. Working with this stone repeatedly and becoming more comfortable with the energy it holds is a huge part in understanding the mystery behind Nuummite.

Nuummite also has a history of being a powerful protective talisman that can shield one from negative energy, black magic, evil deities and curses/spells. This stone will replenish one’s aura with purifying energy that will help clear one of any negative vibrations that may be attached to one’s etheric body. We recommend carrying a piece of Nuummite on you when you're exposed to an uncomfortable environment or surrounded by toxic individuals. This mineral will keep your energy protected and unaffected as you go about your daily life without the fear of being exposed to constant negativity.