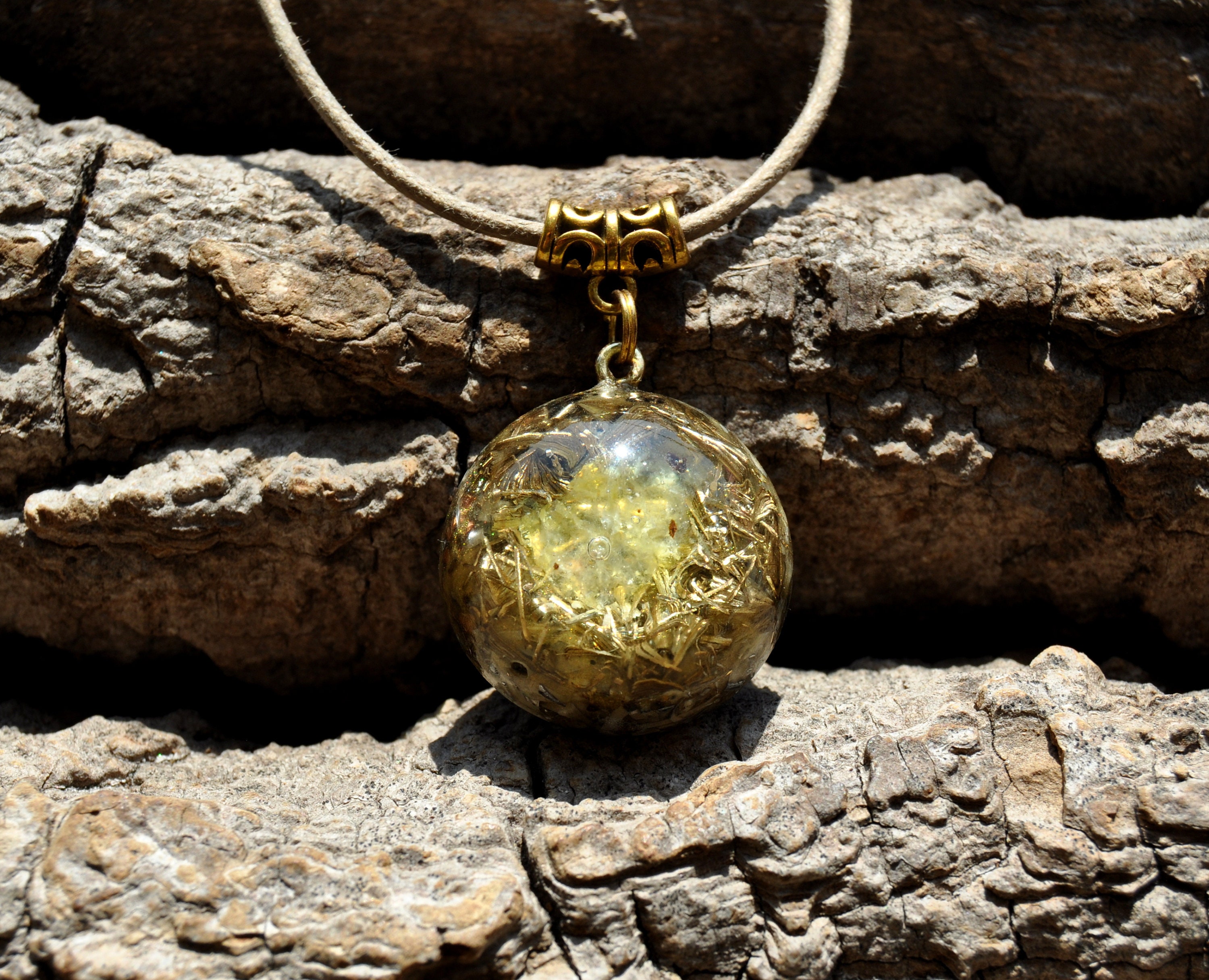 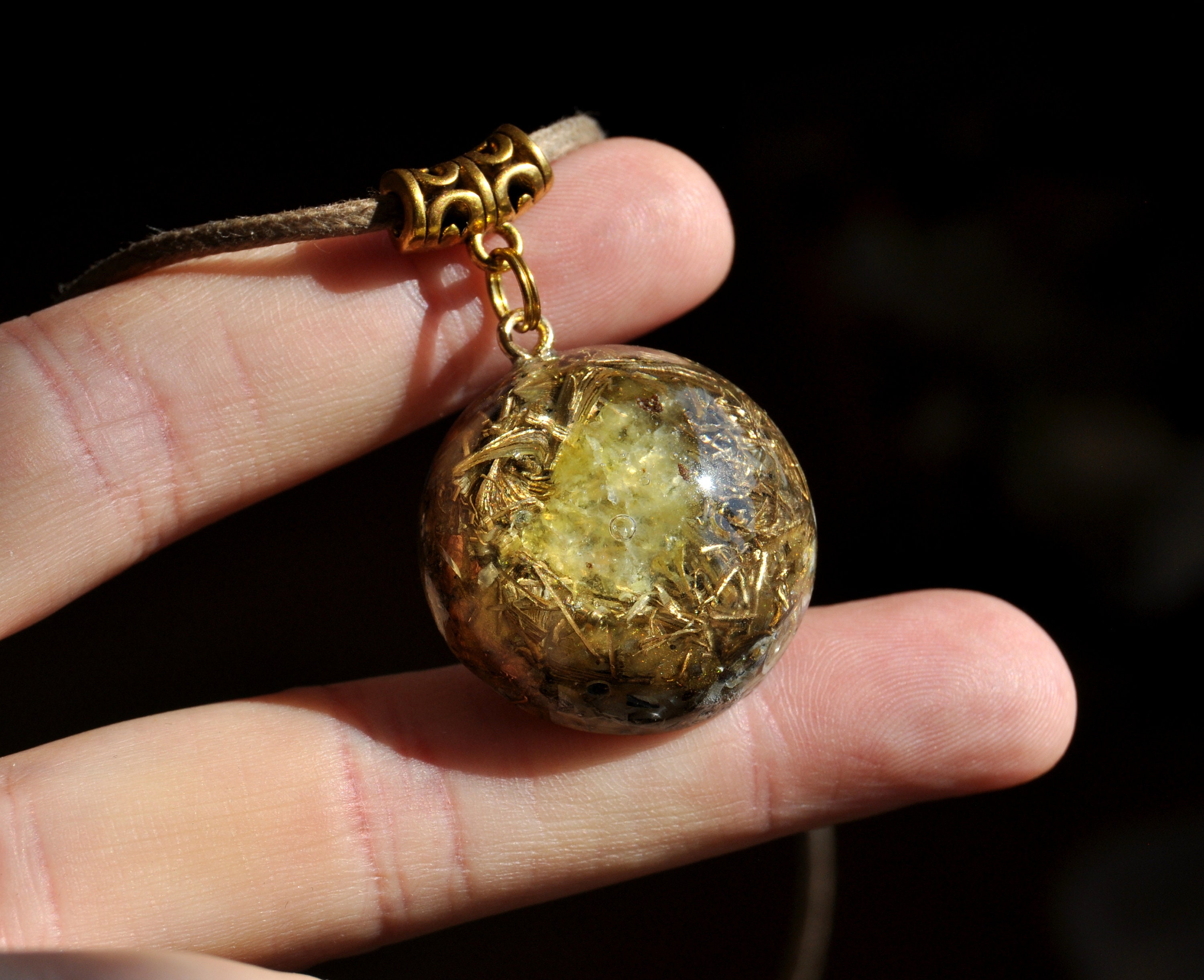 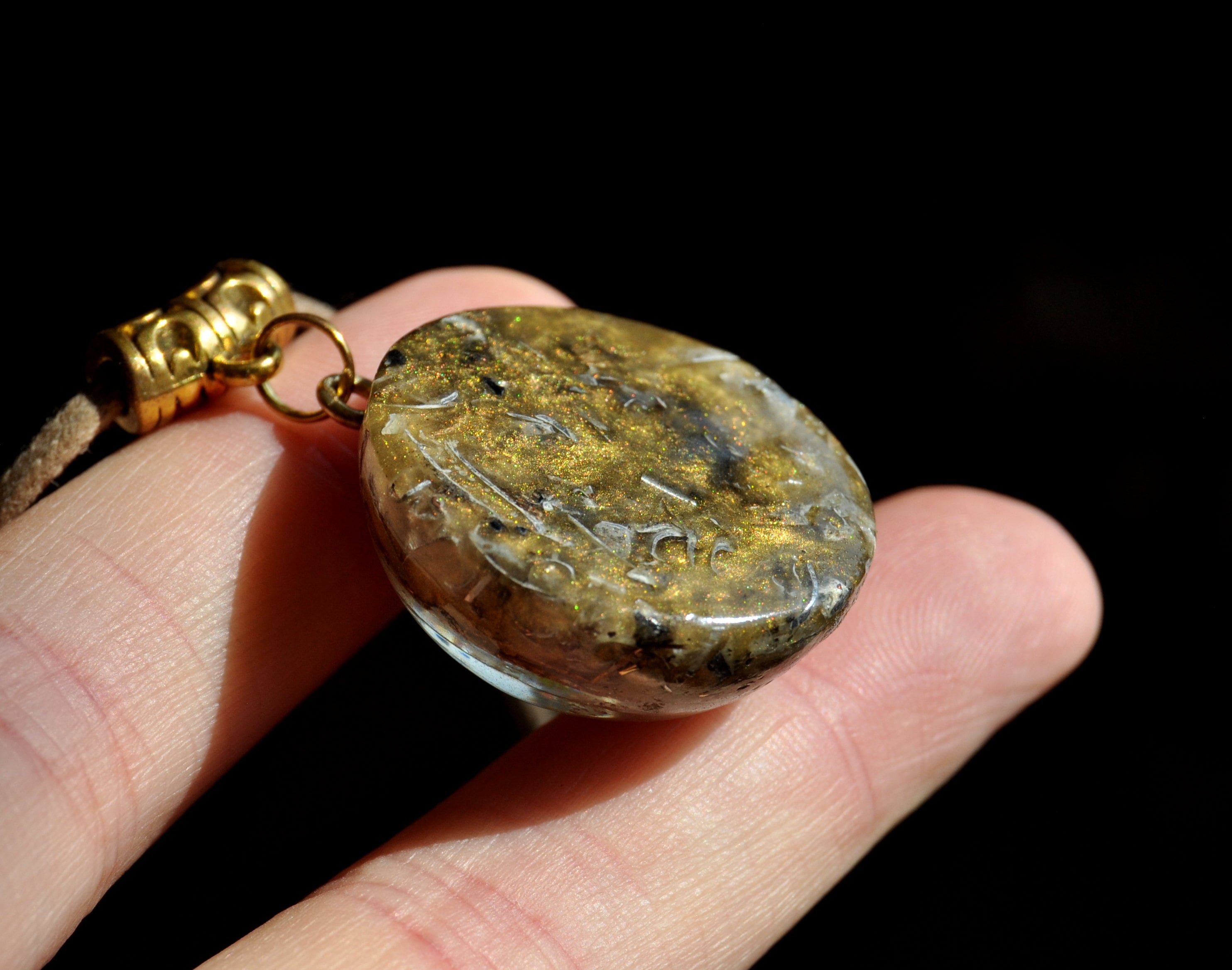 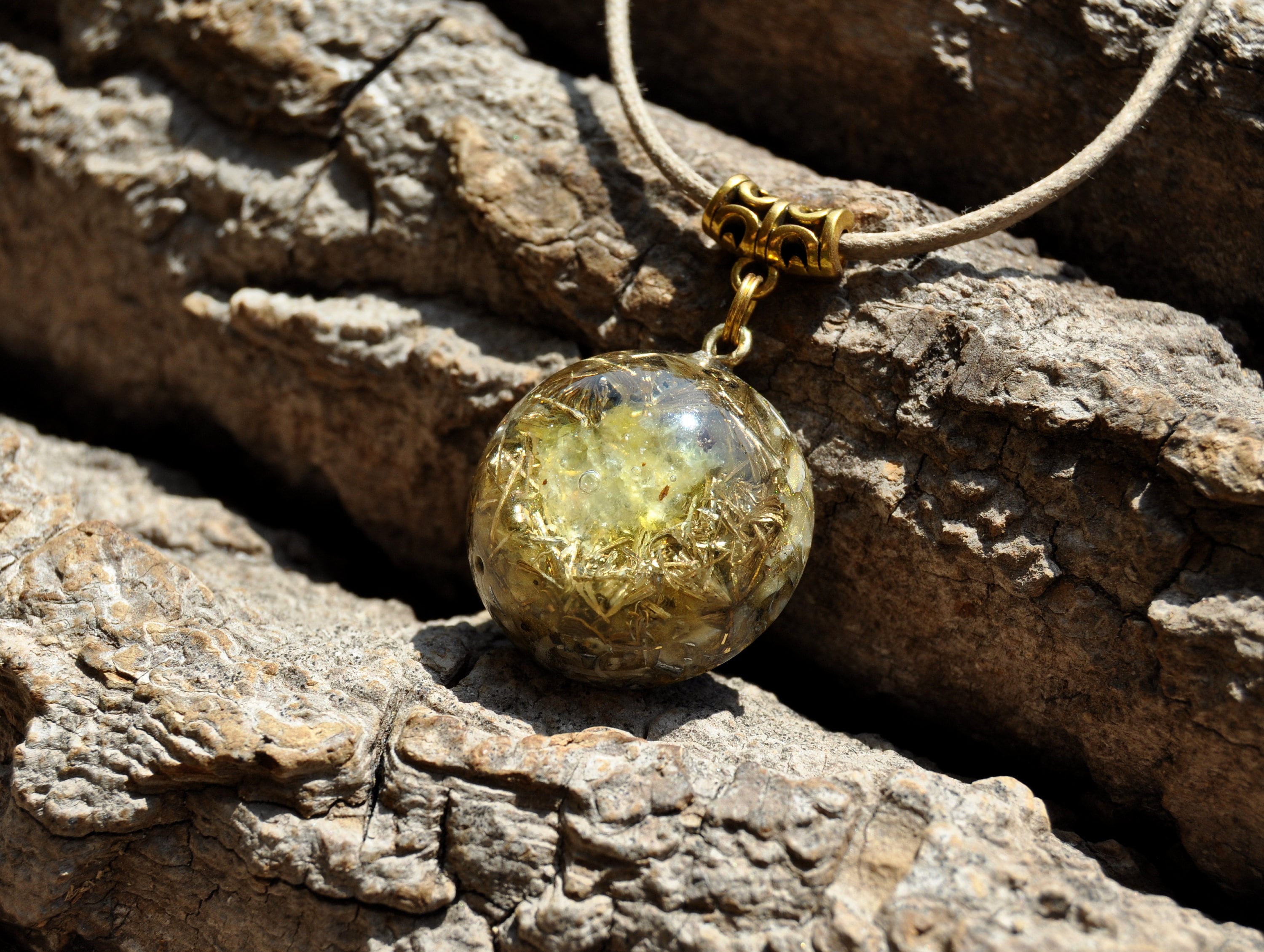 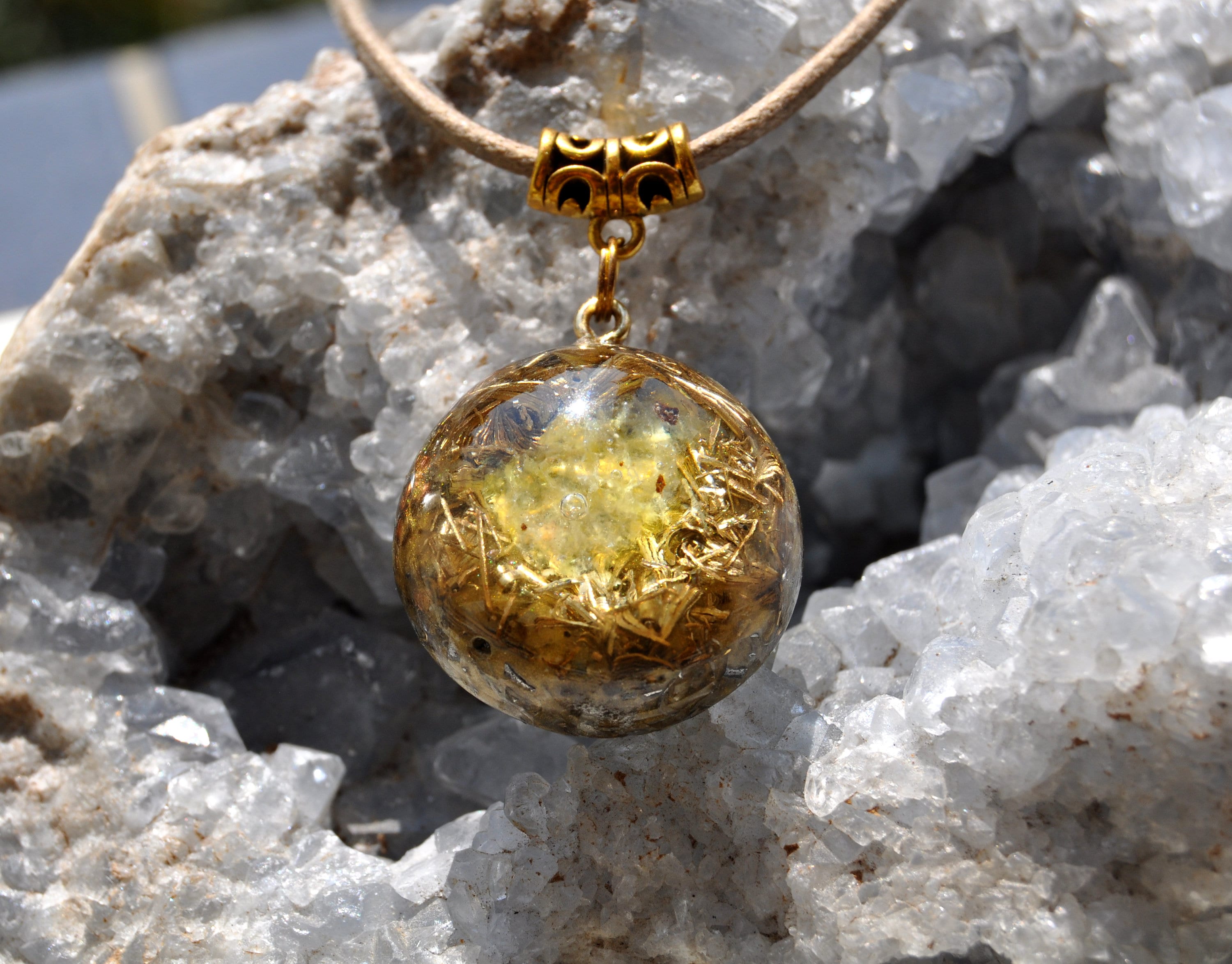 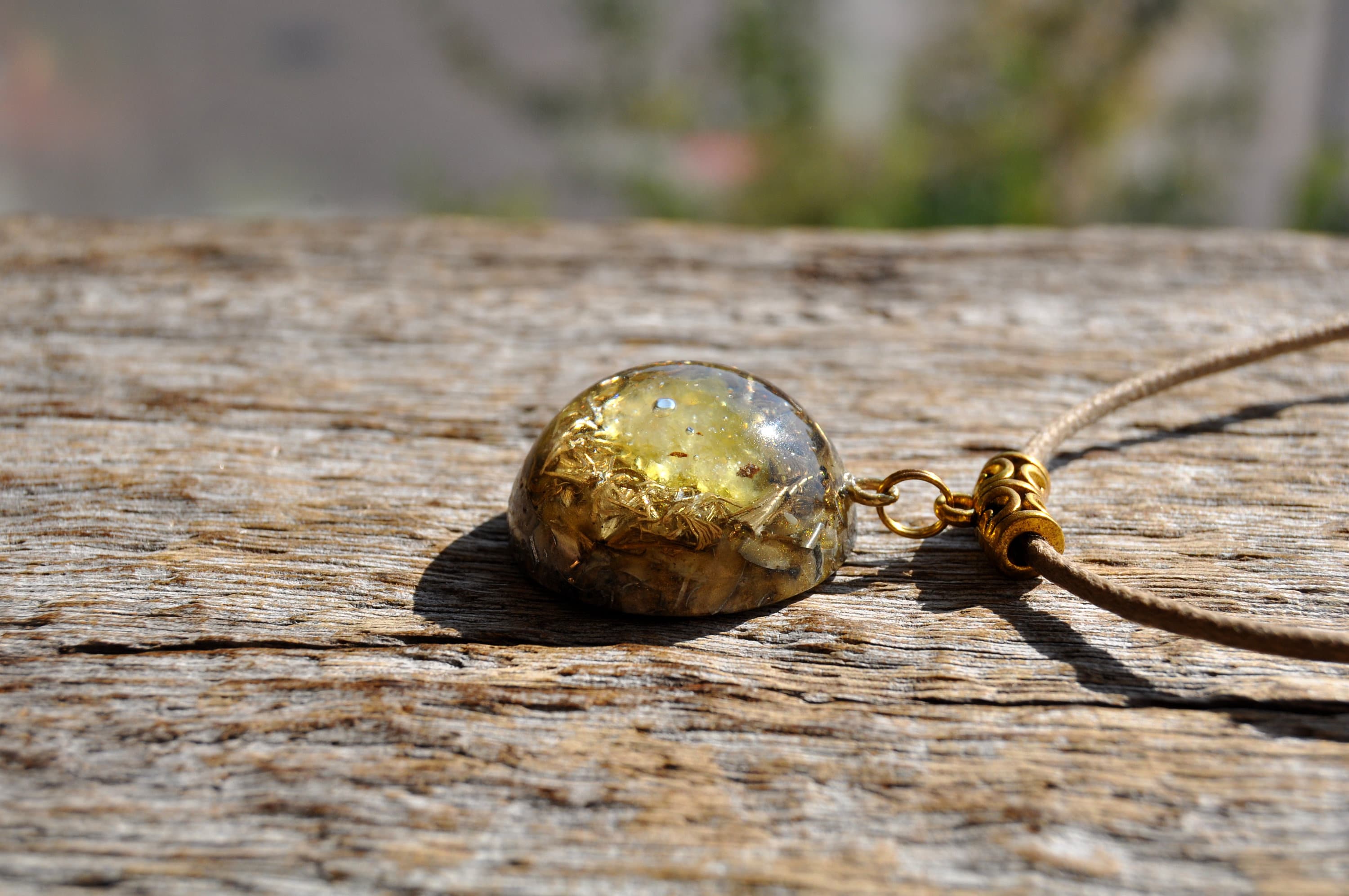 This lovely 2.7 cm / 1.1" in diameter orgone pendant contains brass, aluminum and copper shavings. The main stone is a raw Brucite crystal Brucite from Pakistan. in the front. It furthermore contains Pyrite (to enhance), Rhodizite (to amplify), black Tourmaline (to ground and protect), Selenite (to charge and clean) and clear Quartz (for piezo electric effect) all within a durable polyester resin setting for optimal shrinkage/pressure on the quartz.

Brucite is another new and rare mineral. It can come in the colour range red, yellow, green, blue,grey and white depending on the impurities in it. It is a magnesium hydroxide mineral that can be found in many parts of the world.

The canary yellow type is considered most rare as it comes from one location in Killarney, Saifullah District, Baluchistan, Pakistan.

Yellow Brucite doesn’t feel like other minerals, it feels unique. It has its own identity. Used on the solar plexus chakra to balance the energies there. Brucite pushes the energy up to the heart to activate heart felt relationships to all things. Everything in right relationship to the self. A wonderful tool for those needing confidence or struggling with a sense of self worth. Balancing these two chakras, the solar plexus and the heart means the mind is clear to be decisive and chose directions that further one along their path of development.

Brucite is a stone that asks us to visit our thoughts and weigh our options before we take action. It harmonizes the process of bringing people together in groups or business, as it is a stone that promotes fairness and objectivity. As an agent of positive change, it activates drive and will power, giving us the courage to move toward the achievement of goals. It allows us to cast aside worries and concerns that keep us from accomplishing our dreams. It simplifies the complicated, bringing ease to the worried mind, as it unifies intention and action.

This solar plexus stone relieves depression, awakening the part of you that craves action, allowing you to take control of each moment as it unfolds. It creates a positive force within, helping us sustain knowledge that our actions will be in the best interest of all. Bolstering self-confidence, Brucite allows us to release self-doubt, wrapping us in a blanket of confidence and balance.