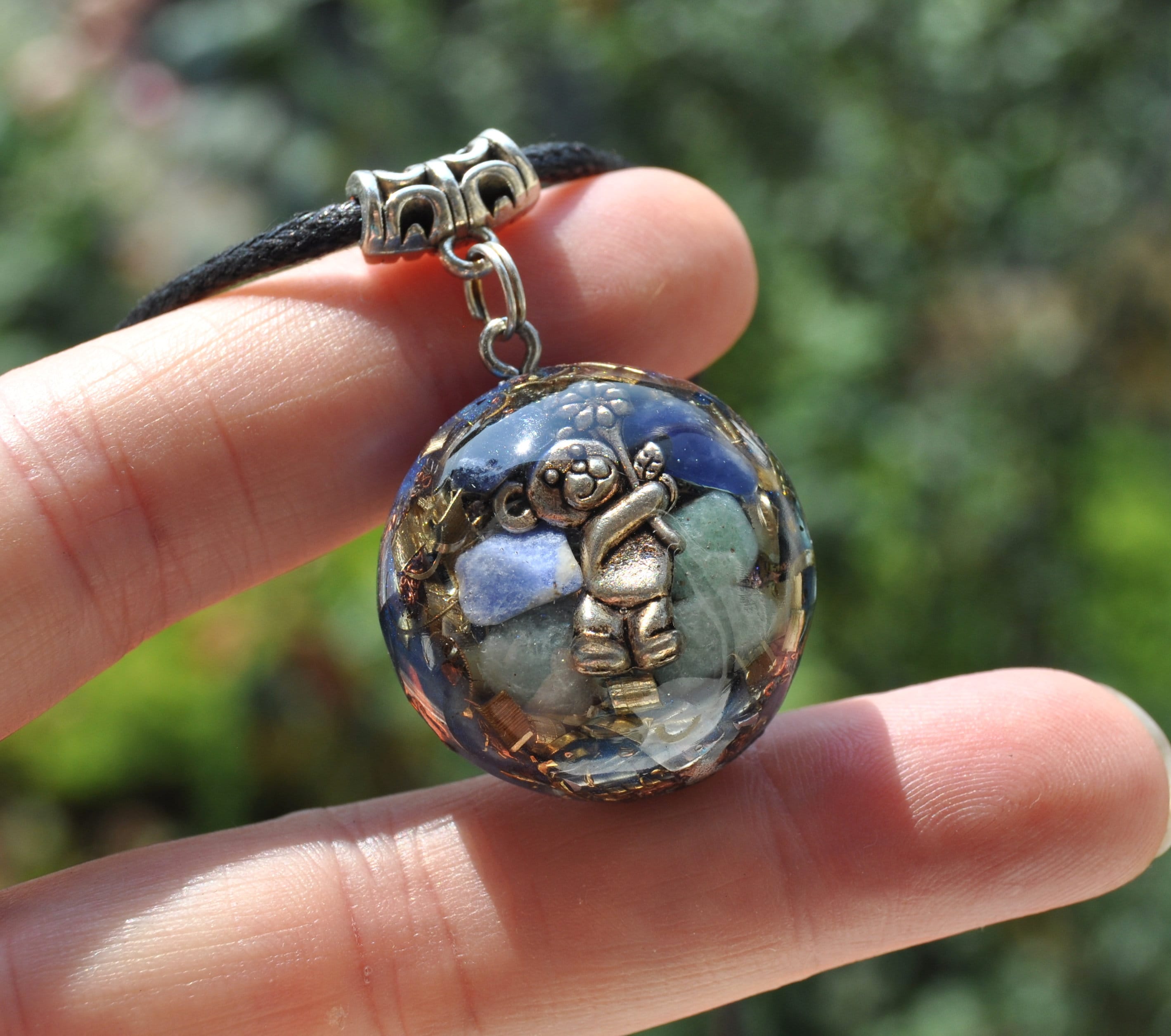 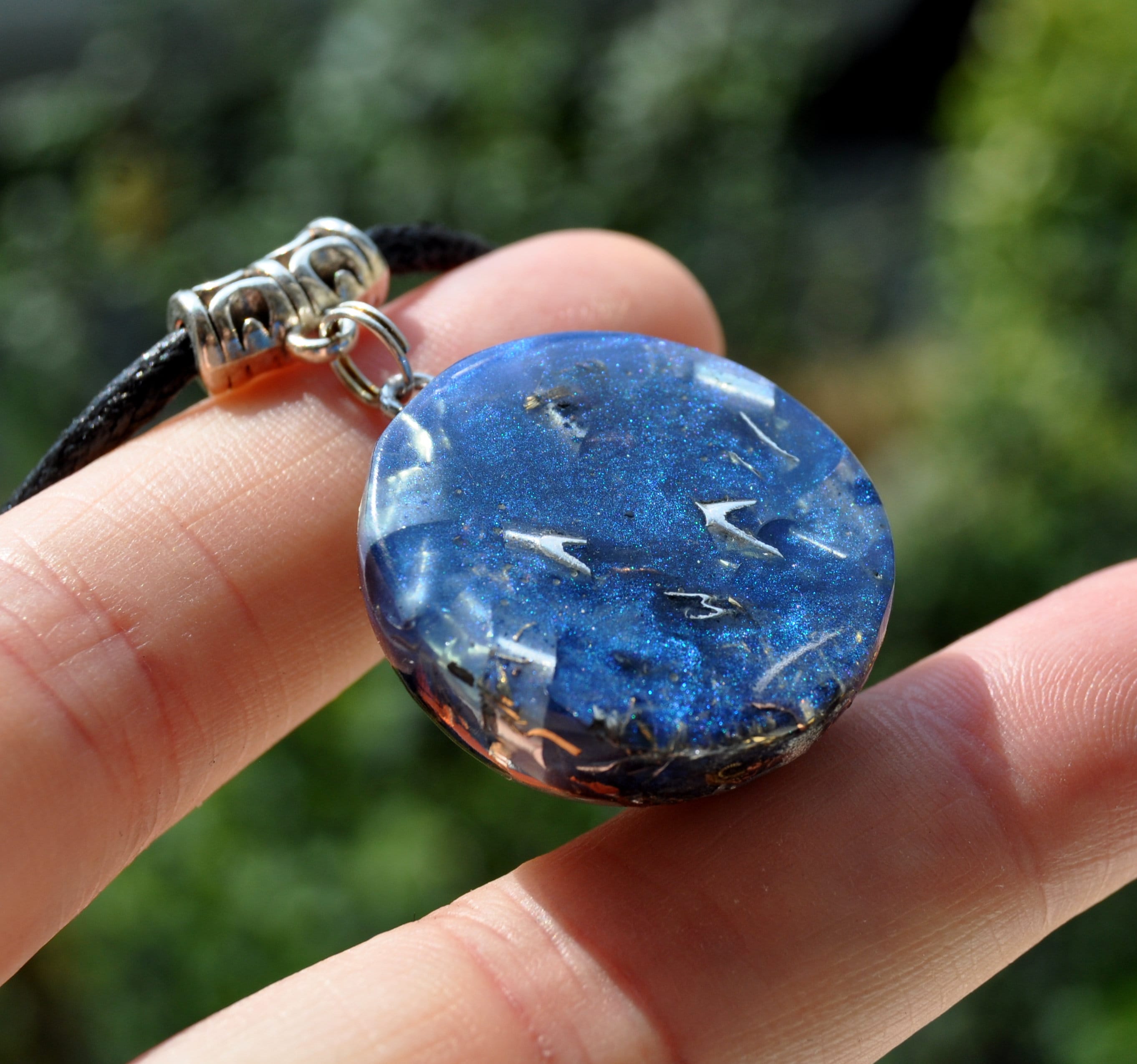 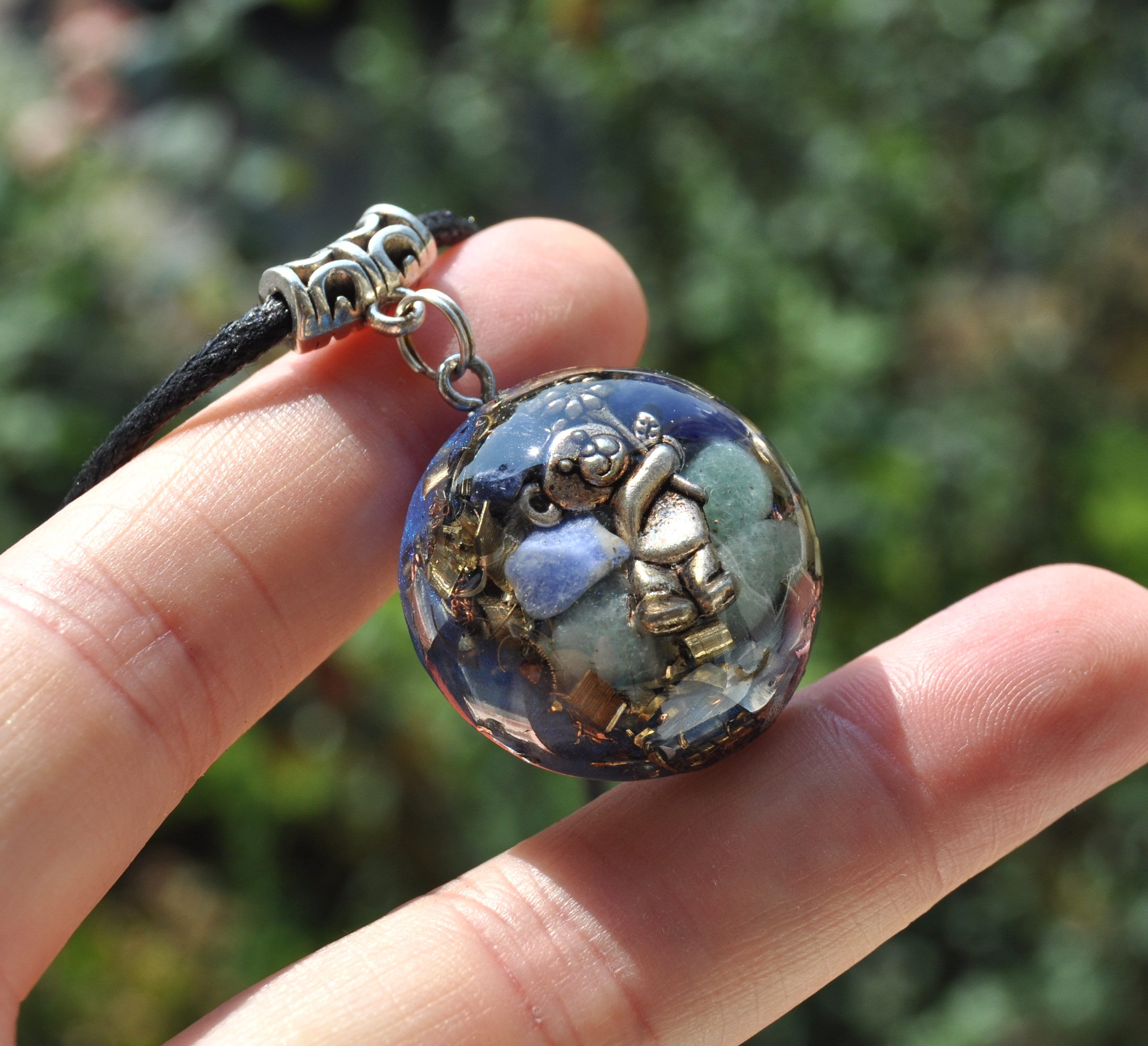 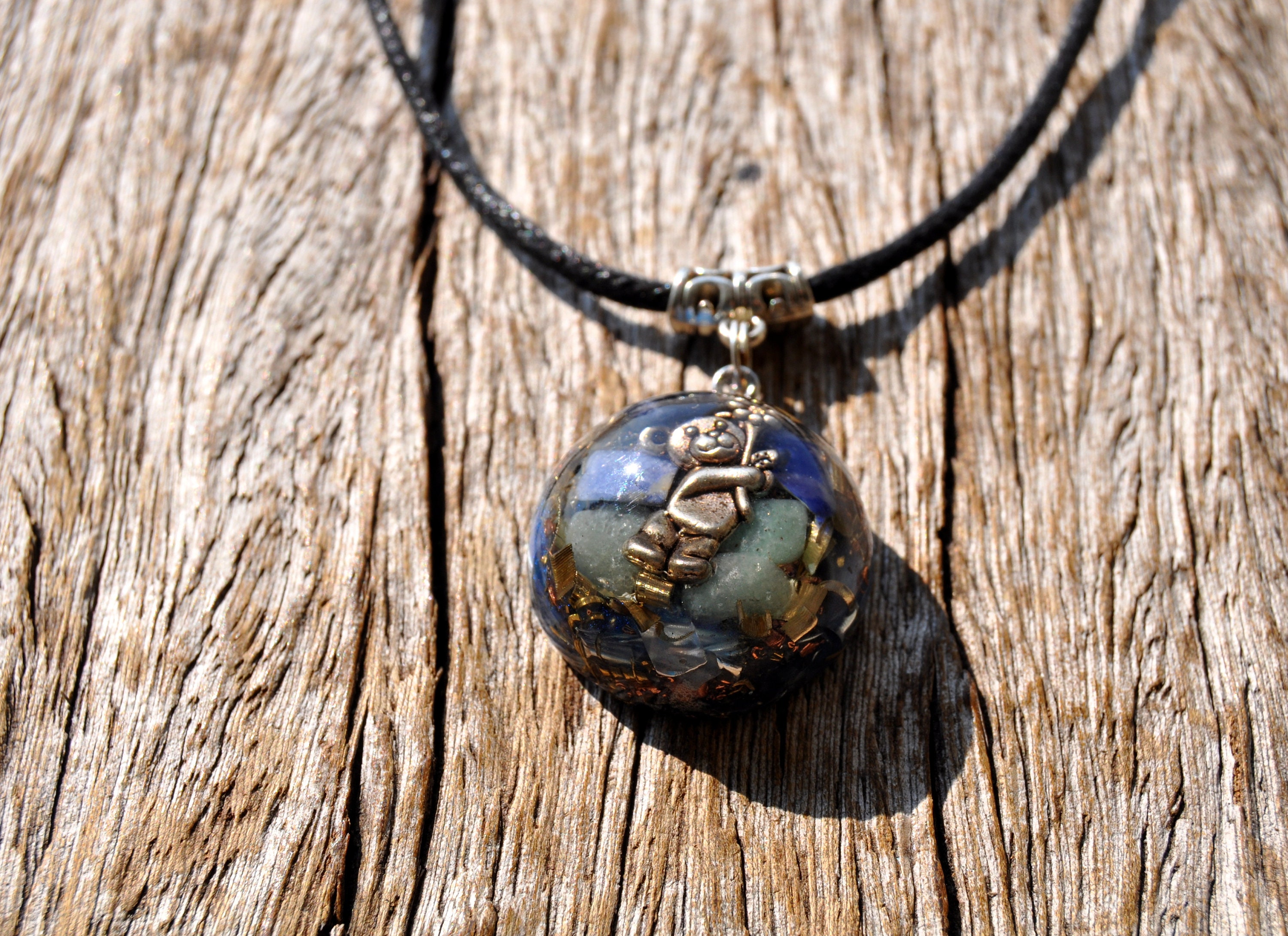 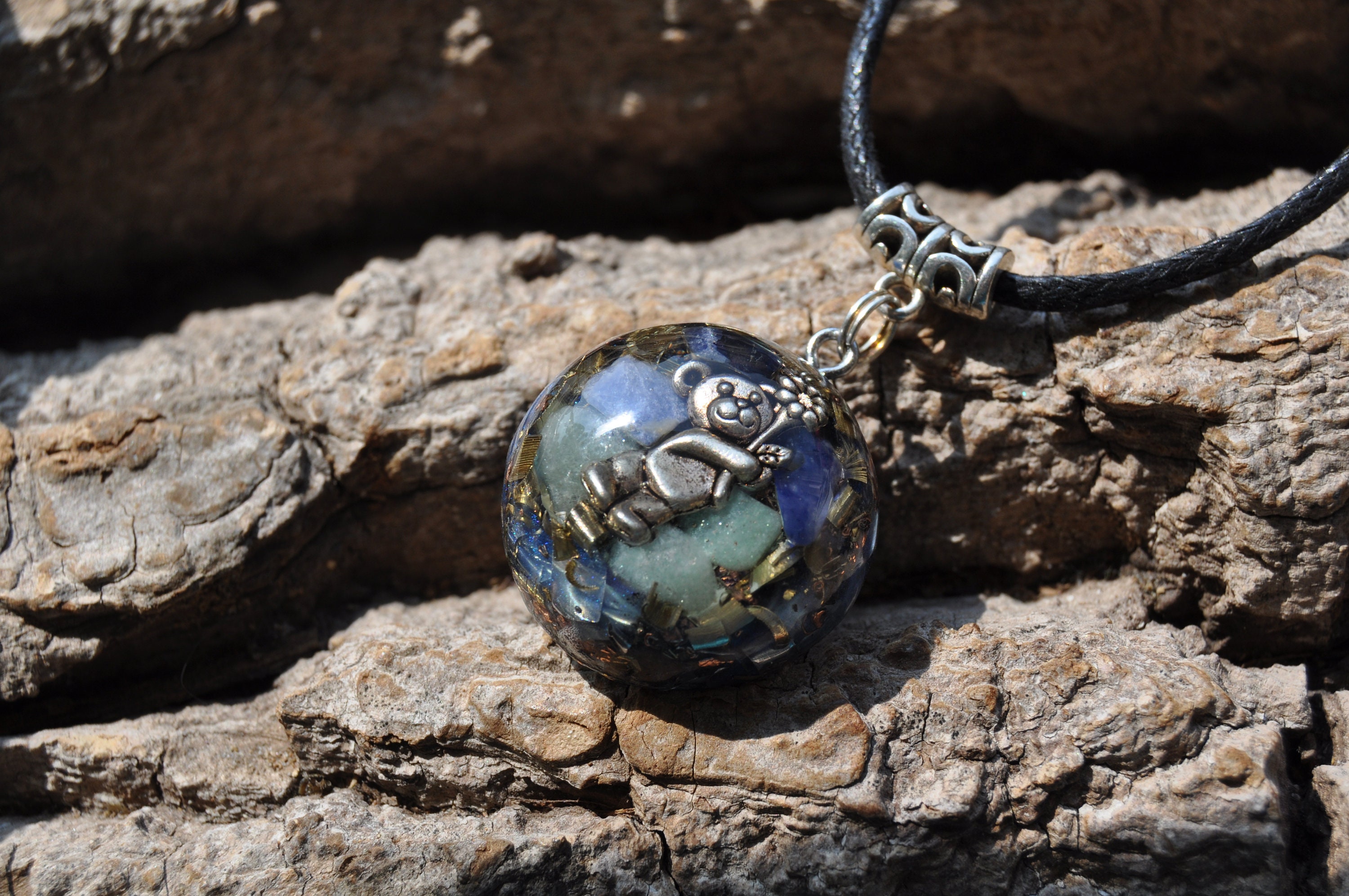 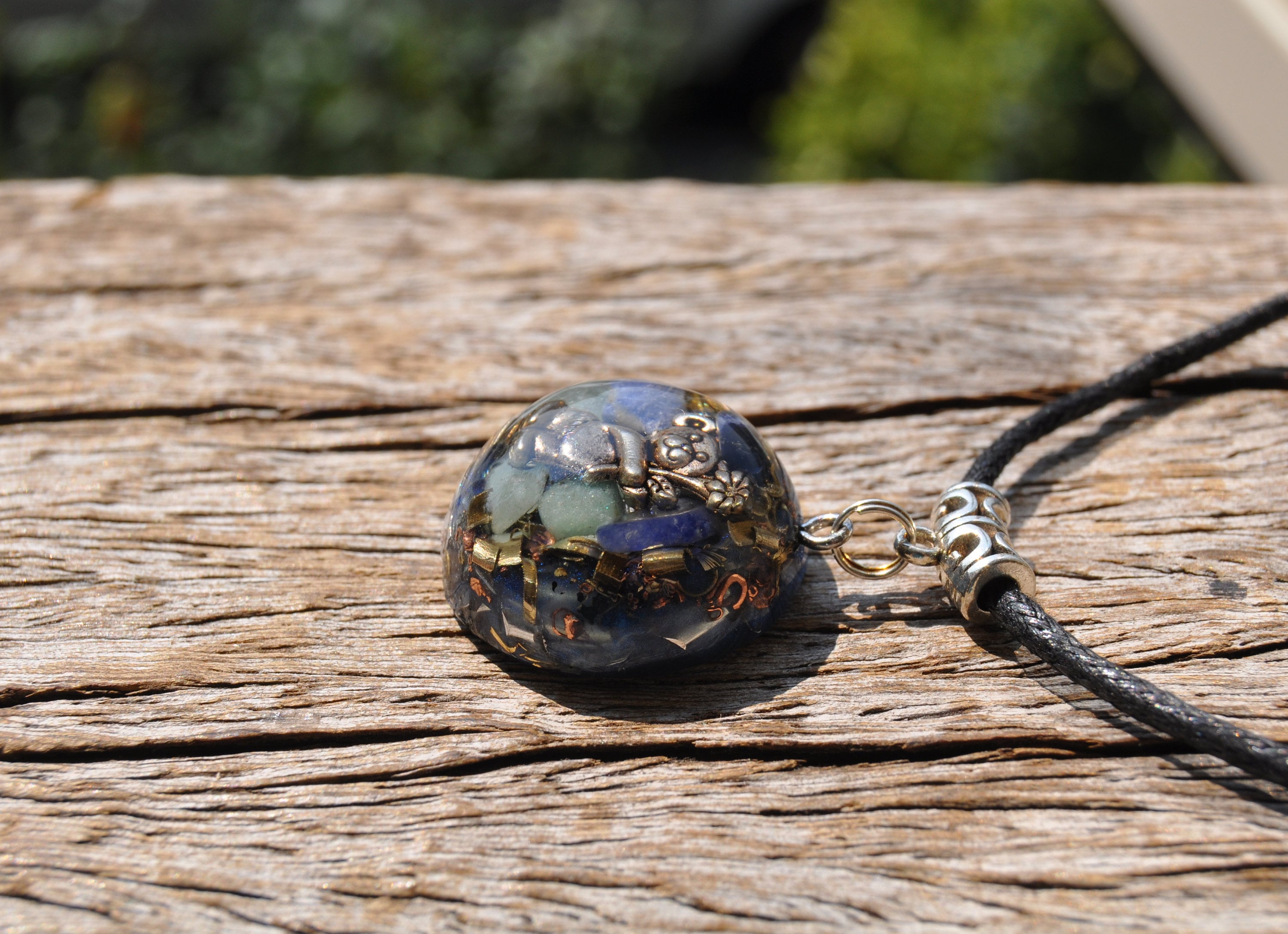 This lovely 2.7 cm / 1.1" in diameter orgone pendant contains brass, aluminum, copper shavings and 24K leaf Gold. The stones in the front are Sodalite and green Aventurine in the front. It furthermore contains Pyrite (to enhance), Elite Shungite (protection), black Tourmaline (grounding excess energy and protection), Rhodizite (to amplify), Selenite (to charge and clean) and clear Quartz (for piezo electric effect) all within a durable polyester resin setting for optimal shrinkage/pressure on the quartz.

Sodalite is a relative of Lapis Lazuli and Lazurite. It possesses a darker shade of blue than its sister stones.
The royal blue of Sodalite is often mixed with veins of white. These white bands are actually formations of Calcite.


One of the best uses of Sodalite is to wear it as a way to counter becoming too emotional. It offers a sense of detachment that is accompanied by a rational perspective.
Writers are especially attuned to the properties of Sodalite. When kept in the writer’s workspace, the stone promotes creativity and concentration.
This crystal can be placed near computers and other electronic equipment to mediate the effects of electromagnetic energy fields. It can also be carried by those who are sensitive to all energy fields.

Sodalite can be used in a group setting to promote harmony and cooperation. It helps individuals to function better as a team unit.
For this reason, team athletes will find that the stone strengthens the bond between teammates. It can also be used to support unity among two people in a relationship.
The stone works best as a calming influence. It should be kept in any environment where a sense of peace and tranquility needs to be restored.

Sodalite is considered a calming stone. Coupled with its focus on the head it can combine the rational and the spiritual.
Which makes sodalite an ideal stone to clear up problems. It can help to end arguments because it makes clear communication possible.

Sodalite is especially useful for creative people, the combination of heart and mind makes it possible to make your visions a reality. The calming effect can help create order in the chaos that often surrounds creative types.