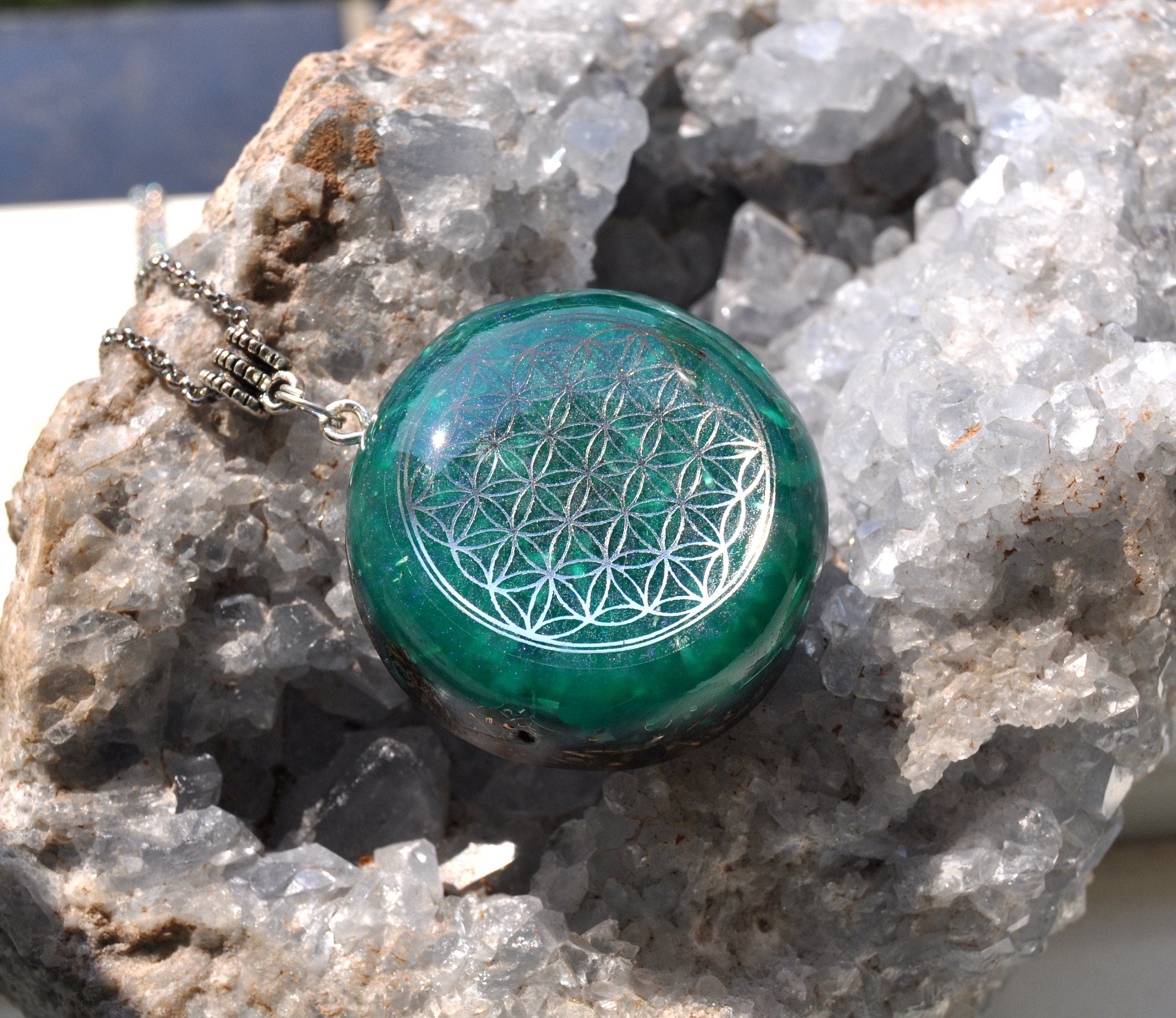 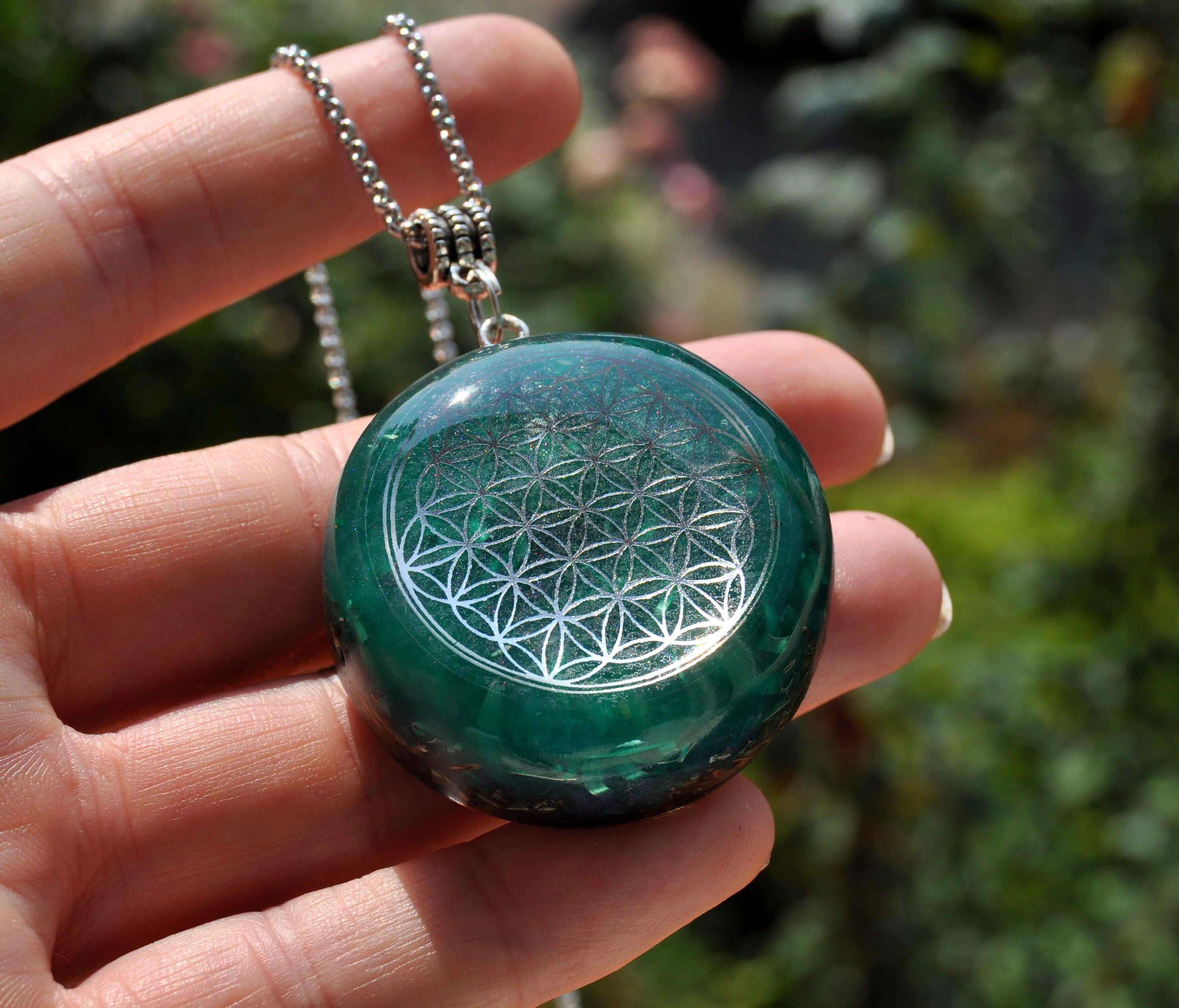 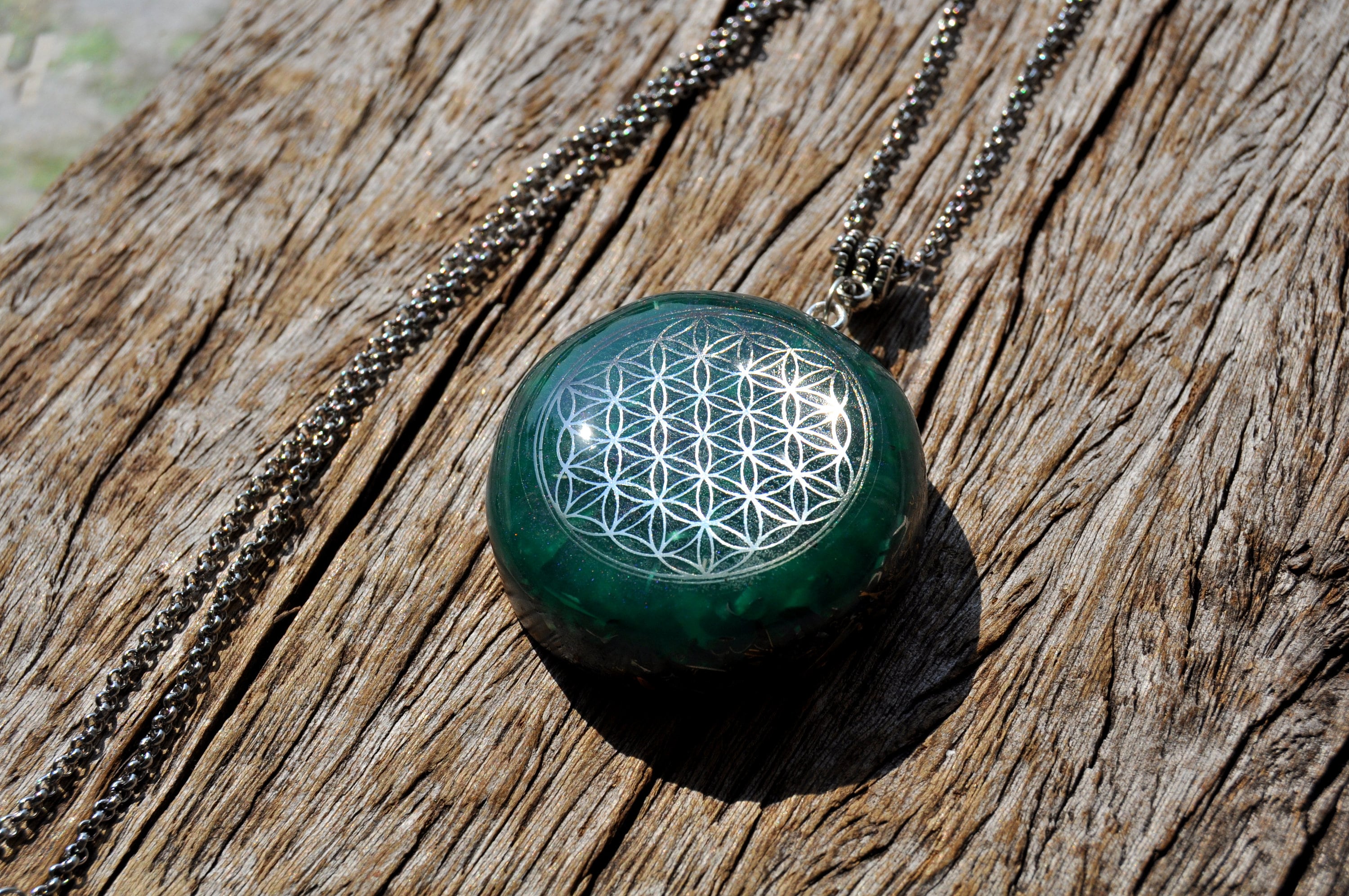 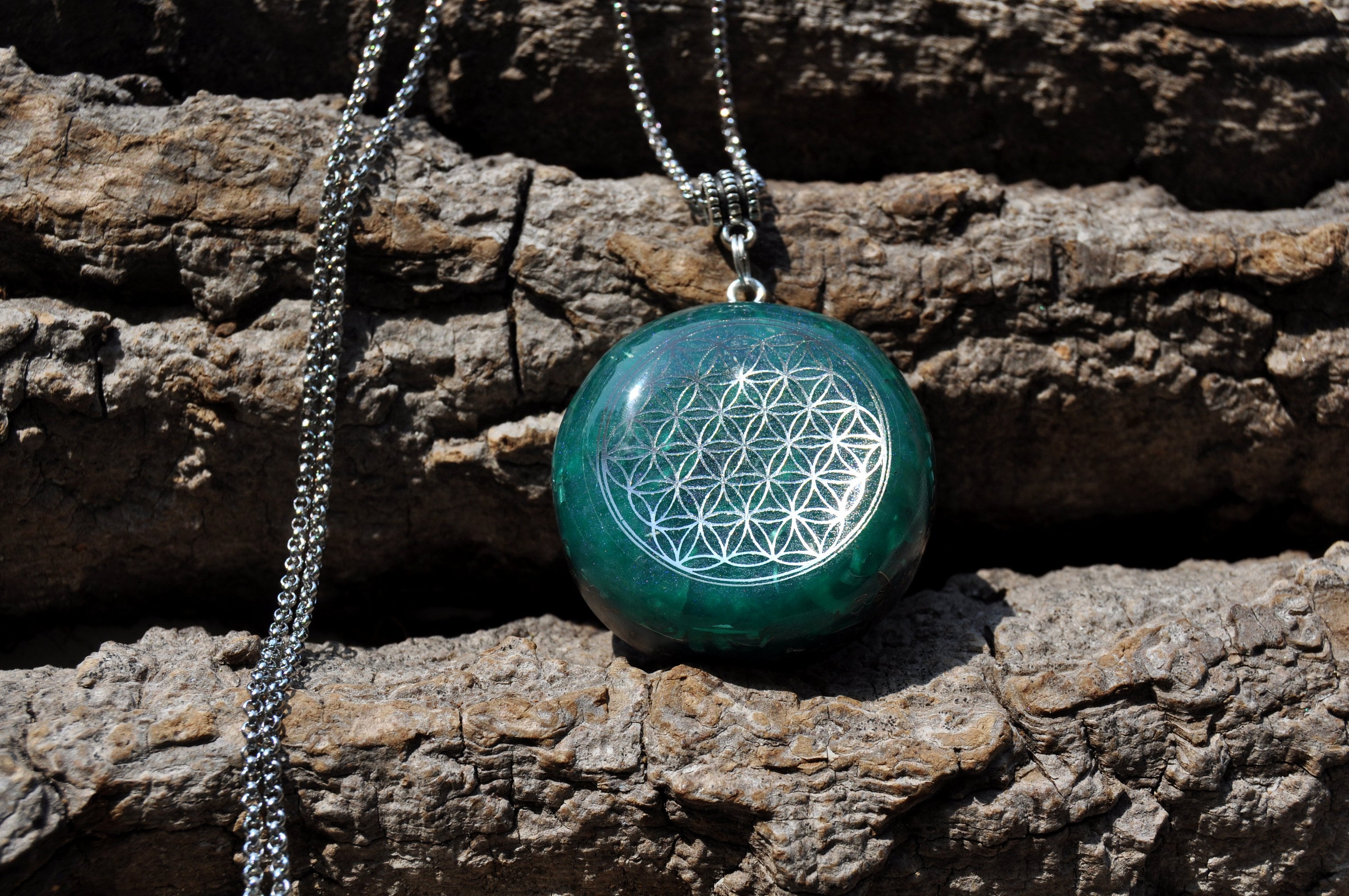 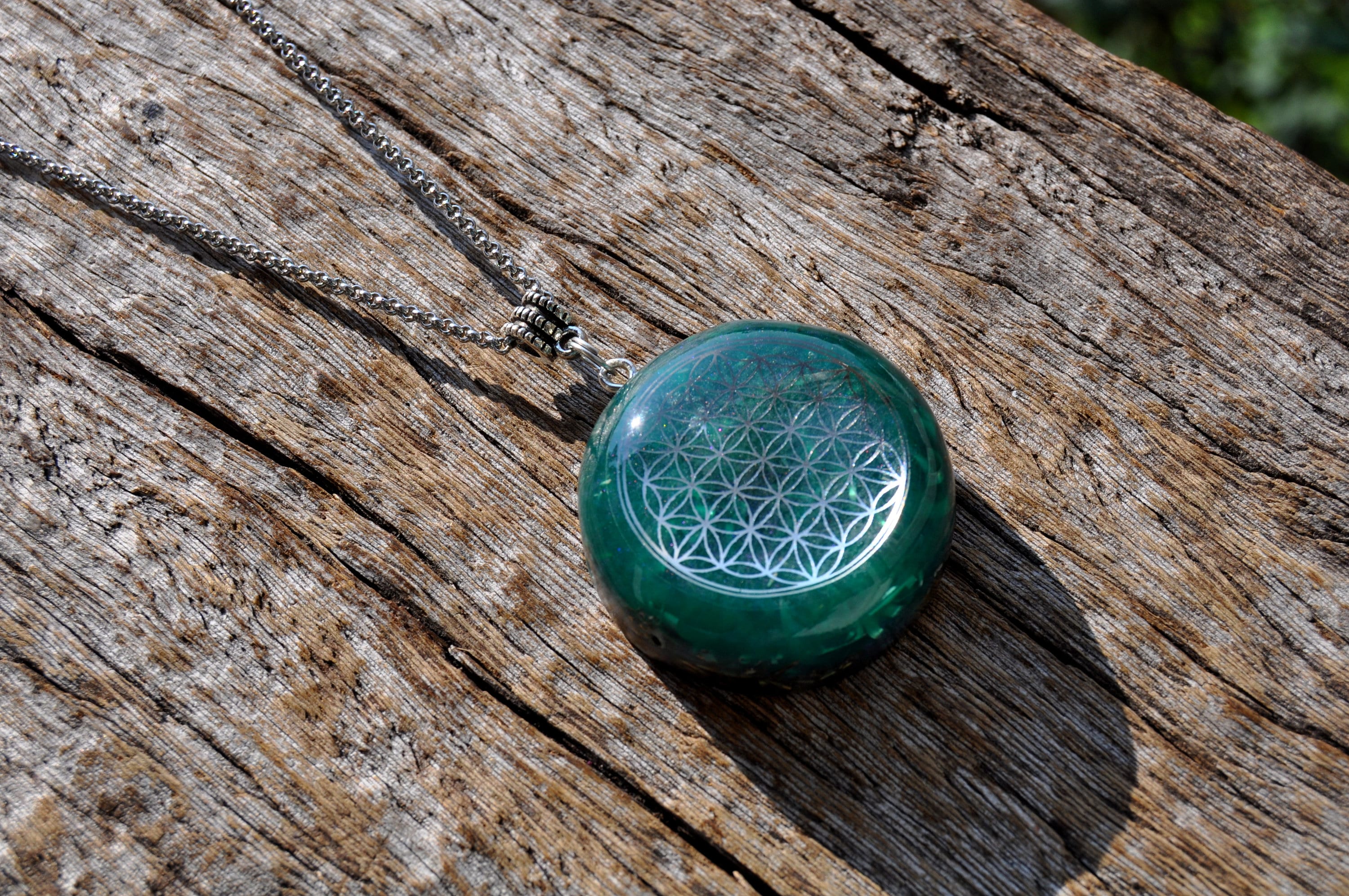 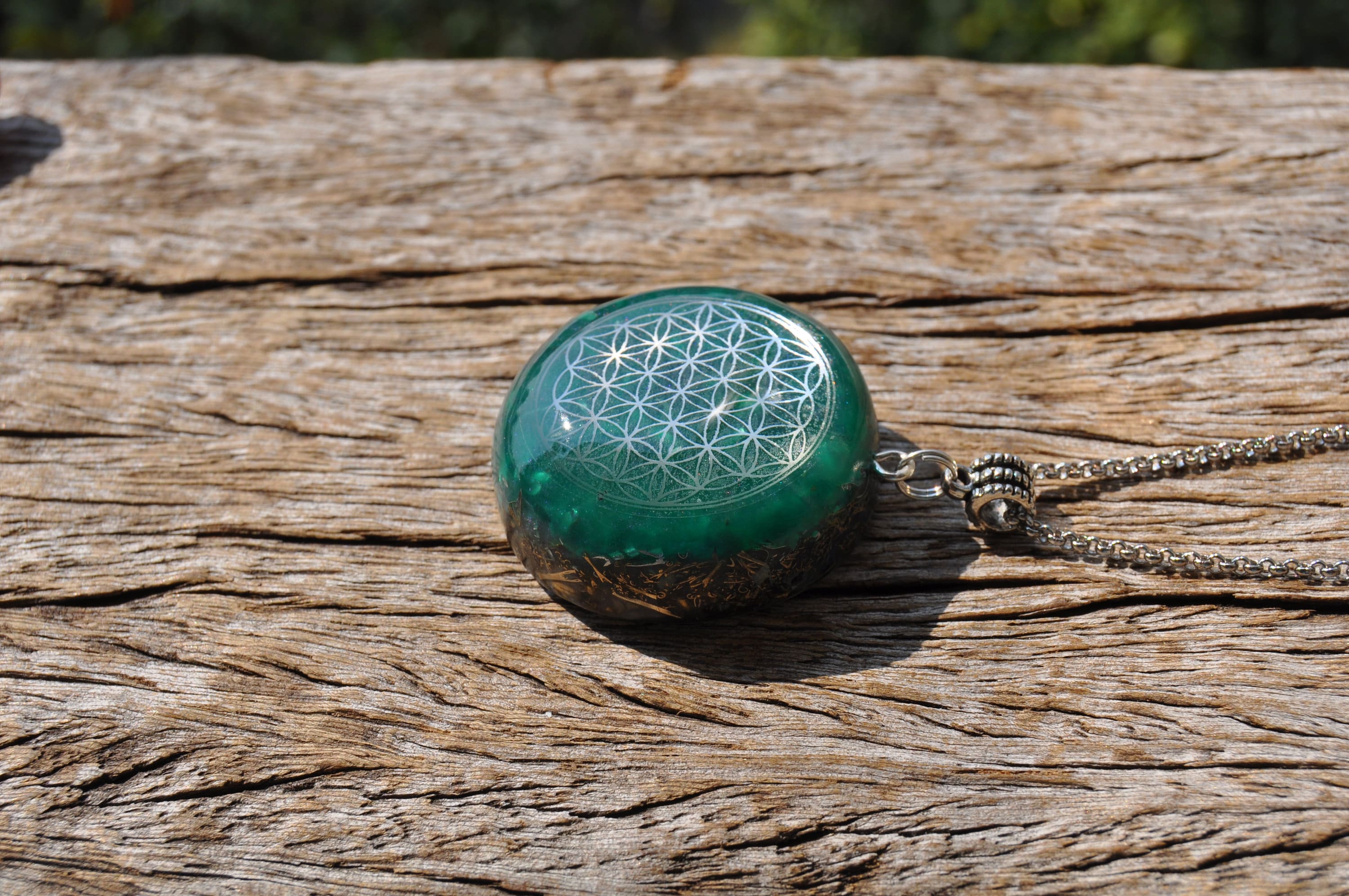 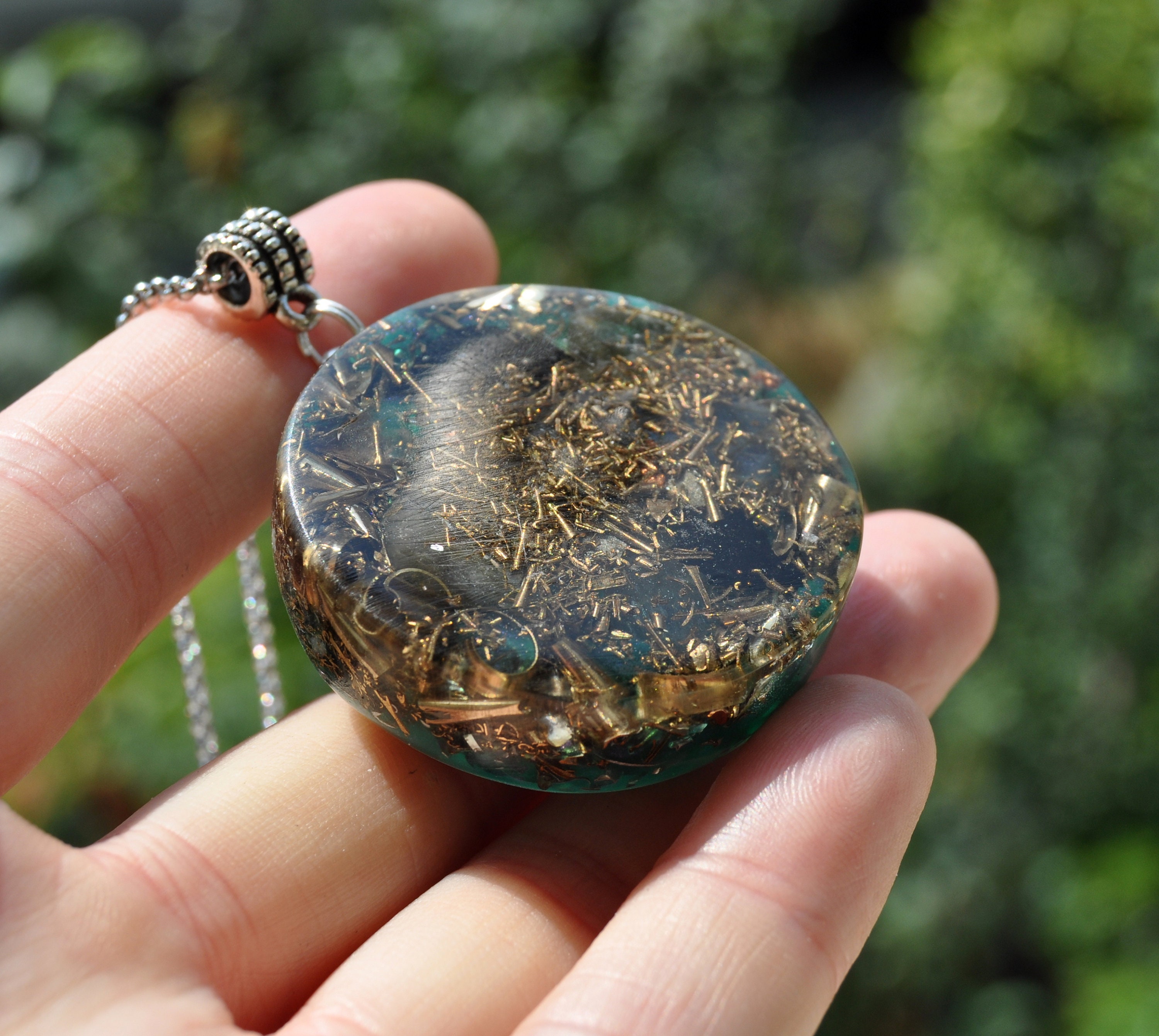 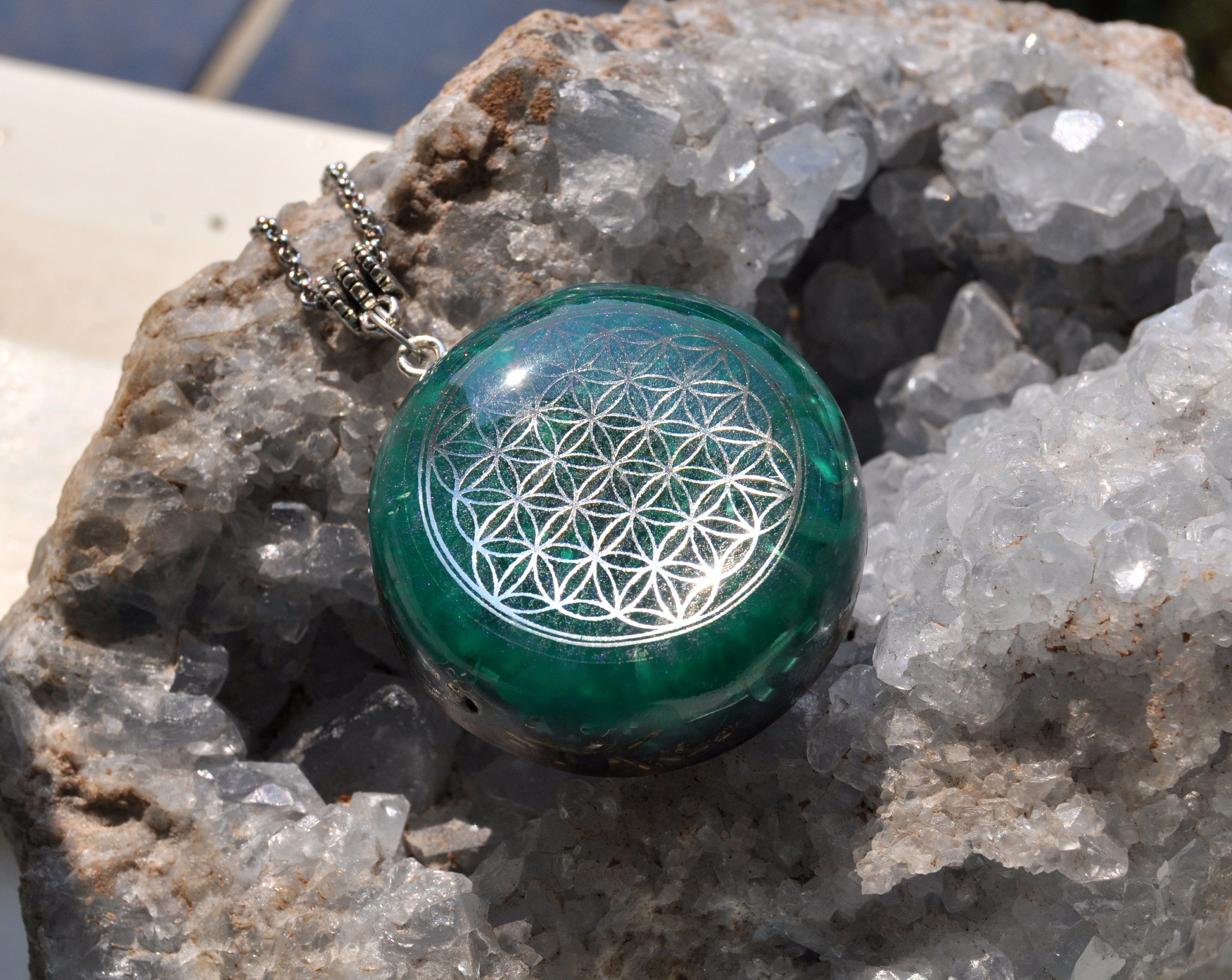 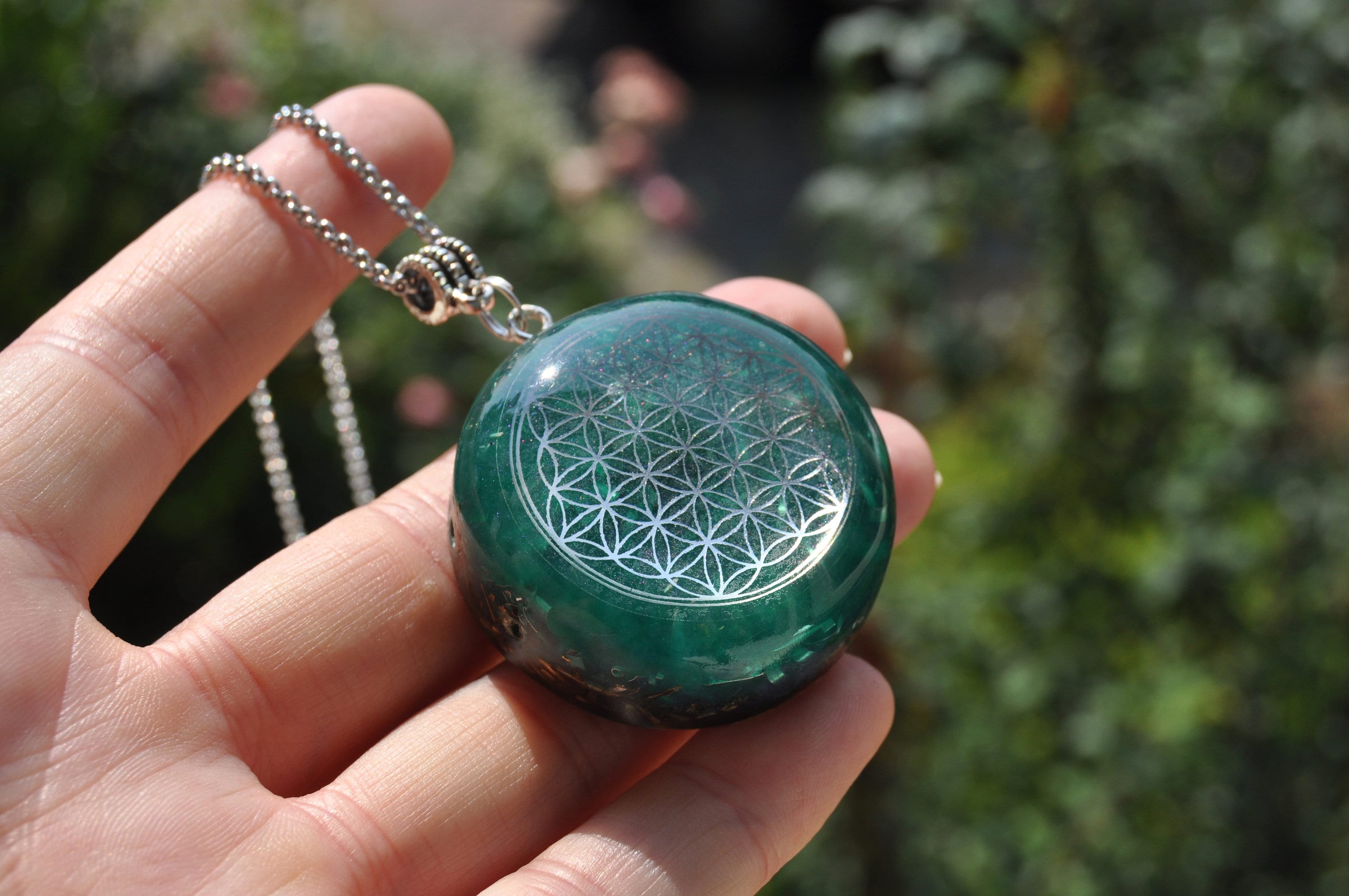 This beautiful 4 cm / 1.6" in diameter orgone pendant contains lots of various metal shavings which is required to clean stagnant energy according to Wilhelm Reich's research.

It also contains Pyrite (to enhance), black Tourmaline (to protect and ground excess energy) ,Rhodizite (to enhance), Elite Shungite (protection) and clear quartz all within a durable resin setting.

Flower of Life Symbol
The flower of life is a geometrical shape composed of multiple evenly-spaced, overlapping circles arranged in a flower like pattern with six fold symmetry like a hexagon. The perfect form, proportion and harmony of the FOL has been known to philosophers, architects and artist around the world. Pagans consider it to be sacred geometry containing ancient religious value depicting the fundamental forms of space and time. In the pagan sense, it is believed to contain a type of Akashic Record of basic information of all living things and is the visual expression of the connections of life that run through all sentient beings.

Pink Opal is a Heart Chakra stone. It is a lovely stone to keep with you as it helps to bring the joy back into your life. Use Pink Opal when you need to get rid of old patterns that are no longer working for you, as well as giving you insight into ways that will help to enhance your emotional, spiritual and intellectual self. You can use this “stone of renewal” to aide in your journey of self-acceptance and love. Pink Opal can keep you calm and centered.

Pink opal vibrates at a more gentle frequency and this enhances its calming and soothing effect on the emotional body. It is well suited for very sensitive people, loving people, and people who are in need of healing the wounds of the heart and working with the heart chakra. Pink opal clears and calms the heart and brings a sense of love, peace, and tranquility to one’s aura. It can be used or worn to keep one’s connection to the angelic realms open and clear. Pink opal is a lovely stone for healing the emotions, especially those connected with subconsciously held pain.

Pink opals are also associated with past lives and the world of dreams. They have often been used to stop nightmares. It is said that meditating and sleeping with pink opals help one resolve any painful remembrances, allowing a gentle and loving compassion for one’s self. They are very helpful in relieving fear, worry, or anxiety; they are helpful in dissipating stress and allowing one to be more centered and calm. Pink opal soothes the heart and physically has been known to stabilize any irregular heart beat. It supports the lungs and the utilization of oxygen in the body. It is a gentle and loving stone for anyone dealing with respiratory issues.

Pink opals can also enhance cosmic consciousness and bring joy and creativity. They are sometimes used when a keen sense of intuition is required.

It has been hand sanded through 11 sets of fine polishing paper so it has a dome design and it is shiney and silky smooth.

Because it is a one of a kind hand-crafted one, it may have slight artistic imperfections.
It comes on a stainless steel 21.5 inches / 55 cm necklace with lobster clasp closing.

Made with love 💚🙂. Will be shipped with Trackingnr.