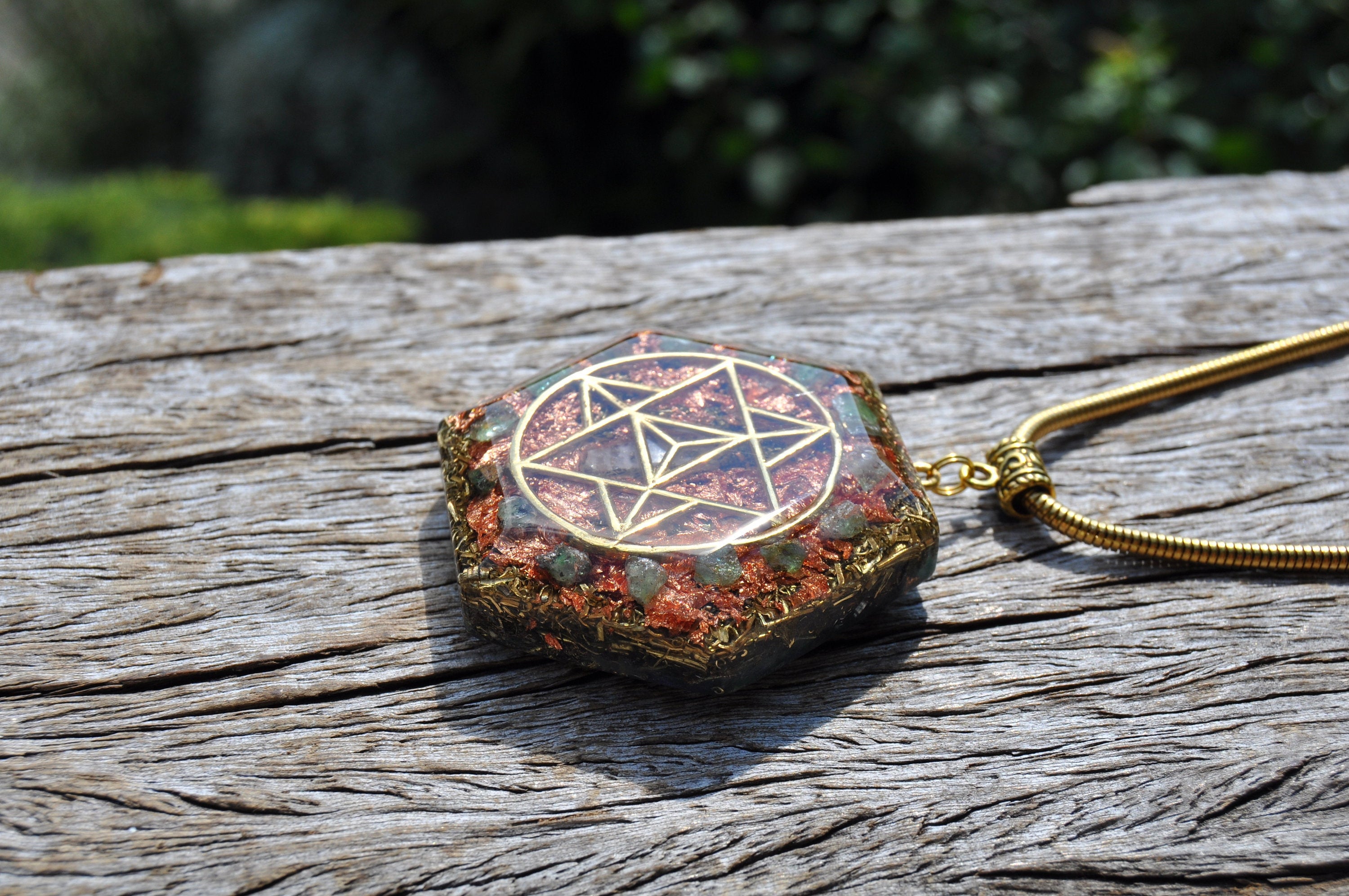 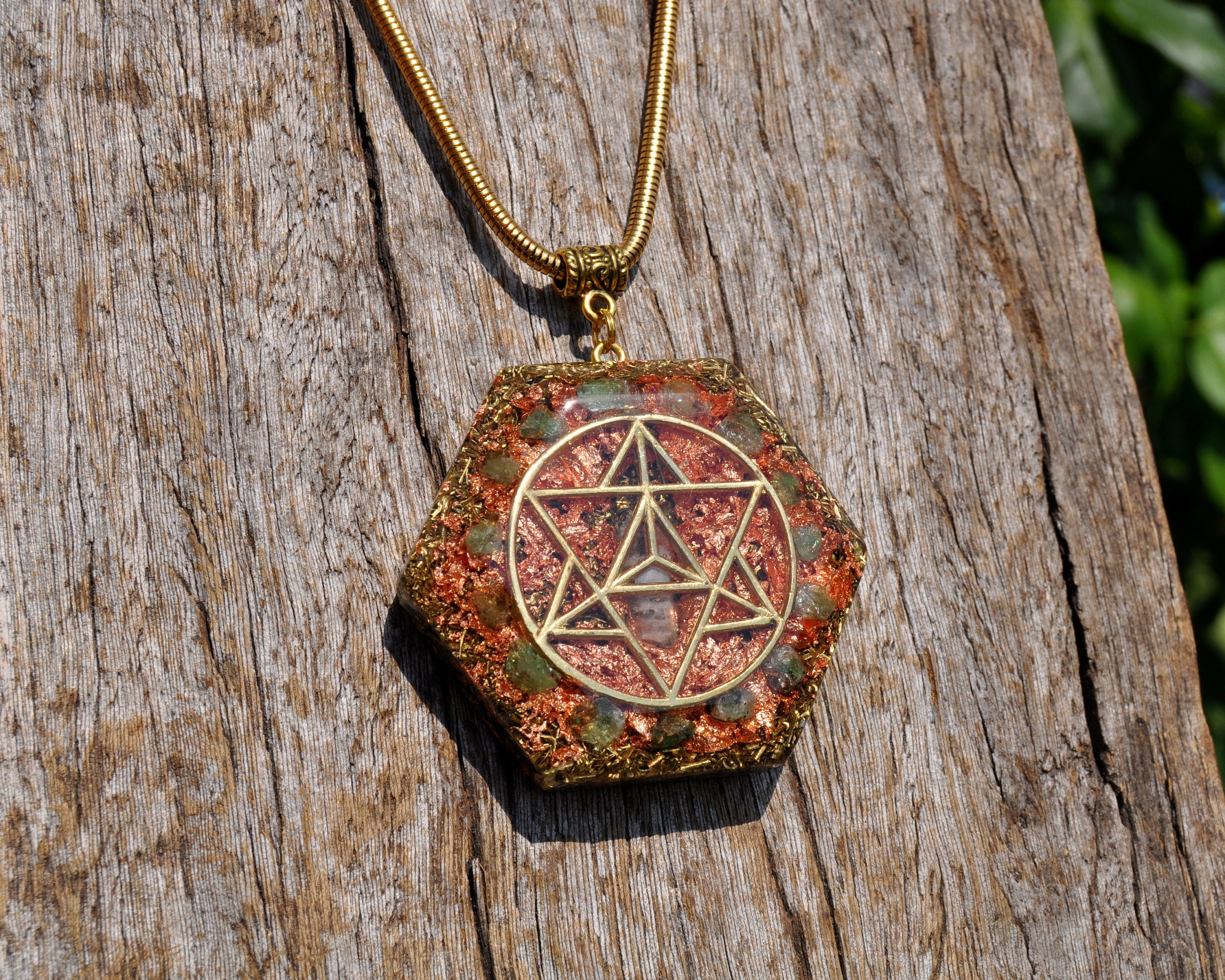 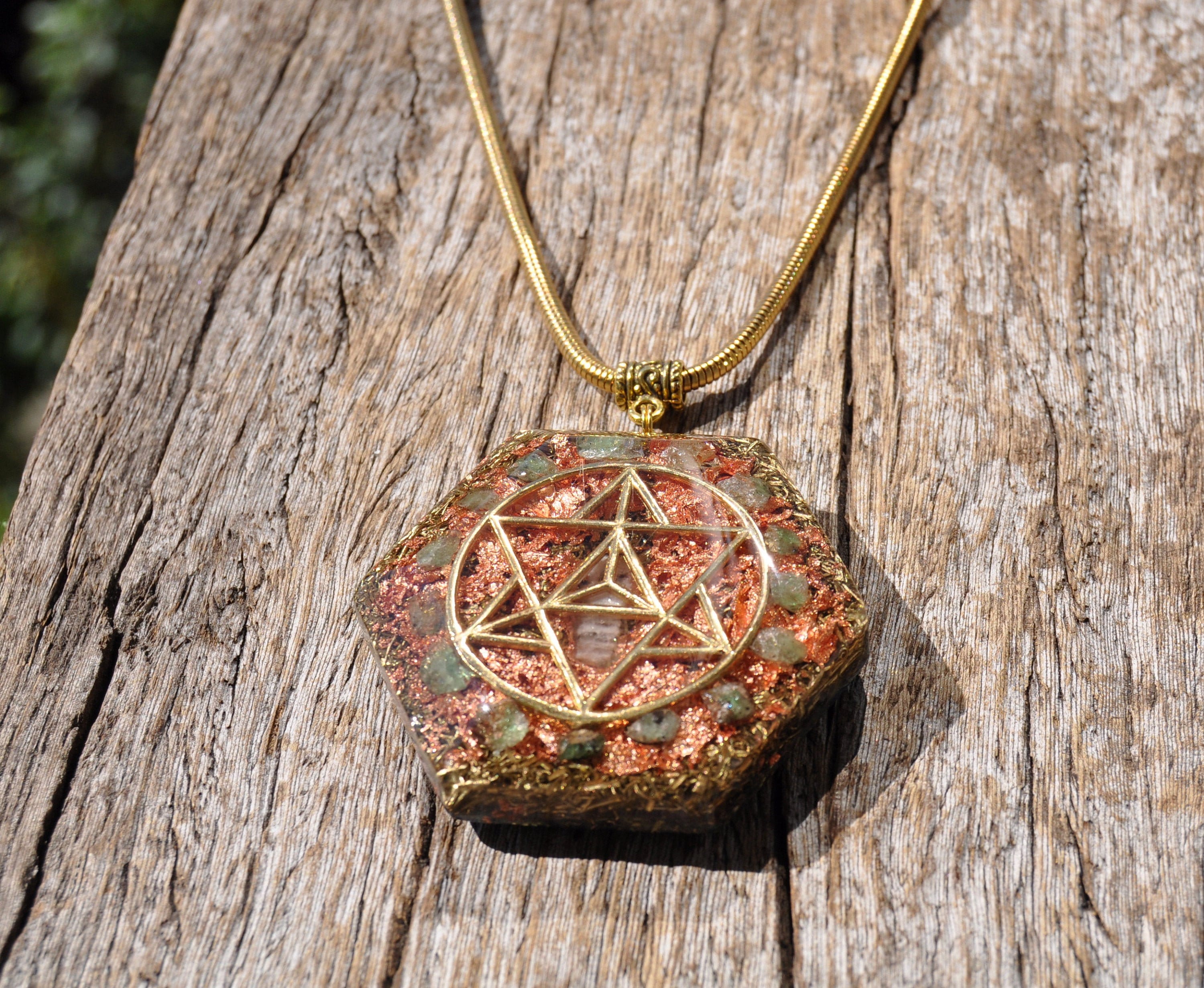 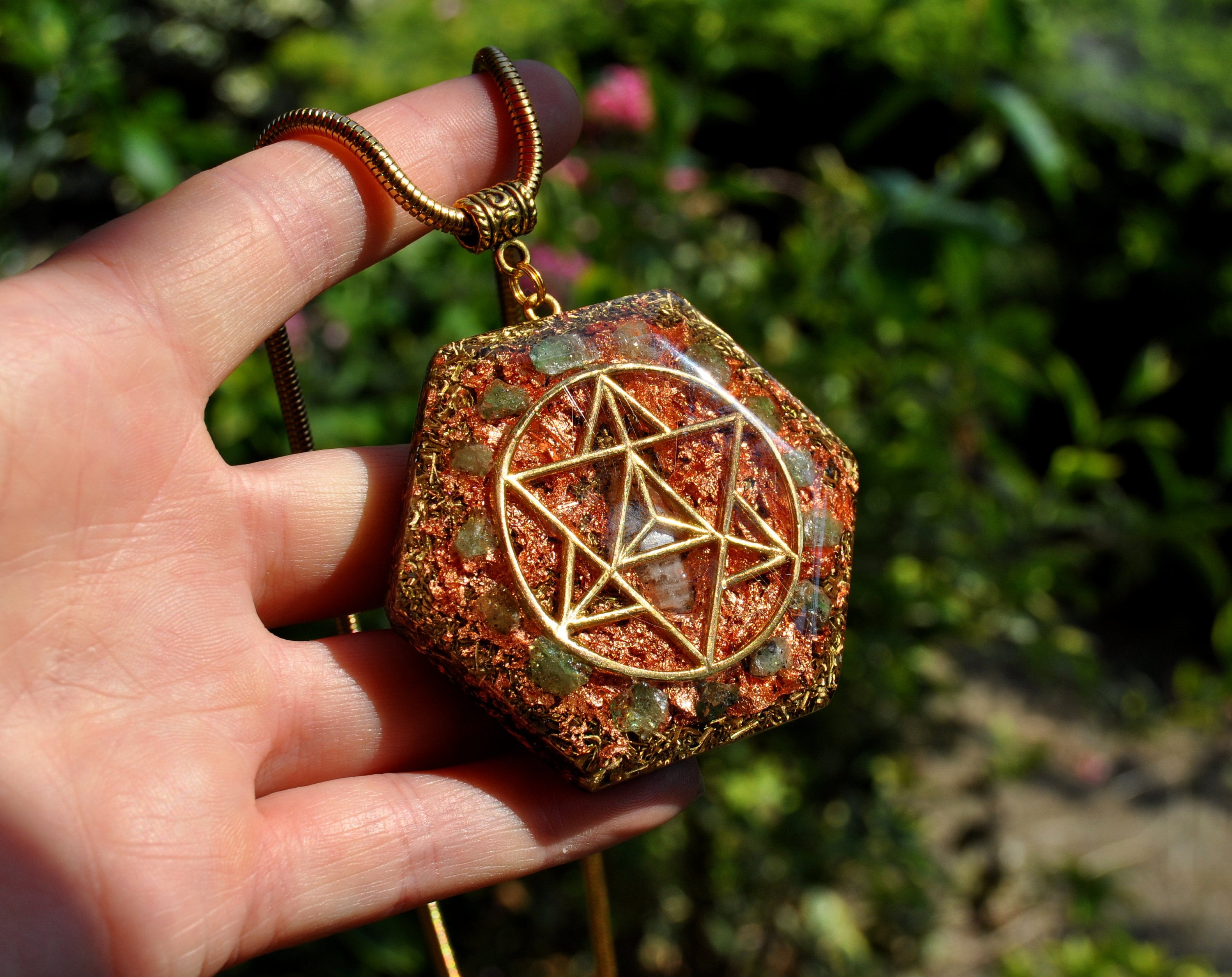 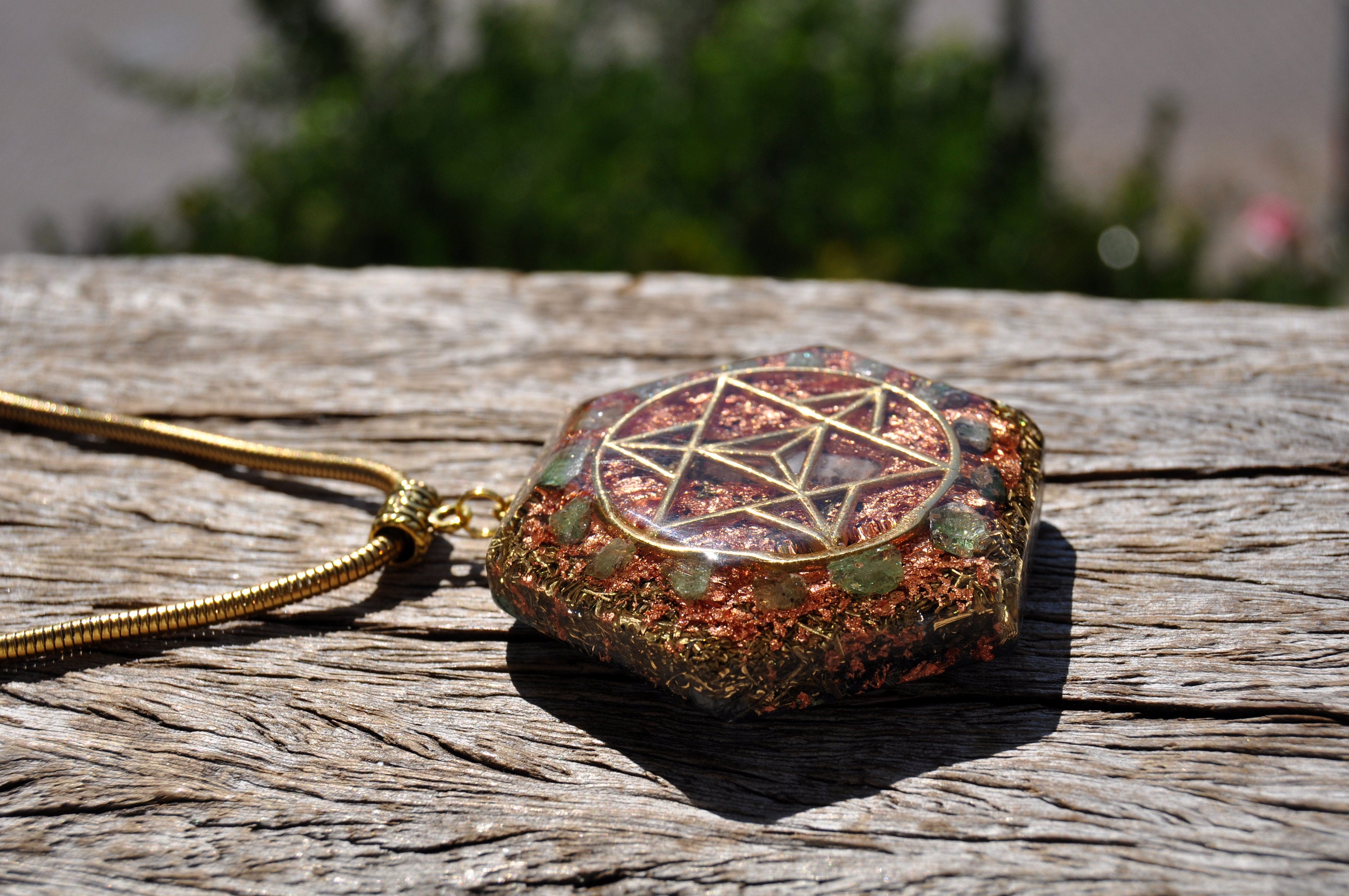 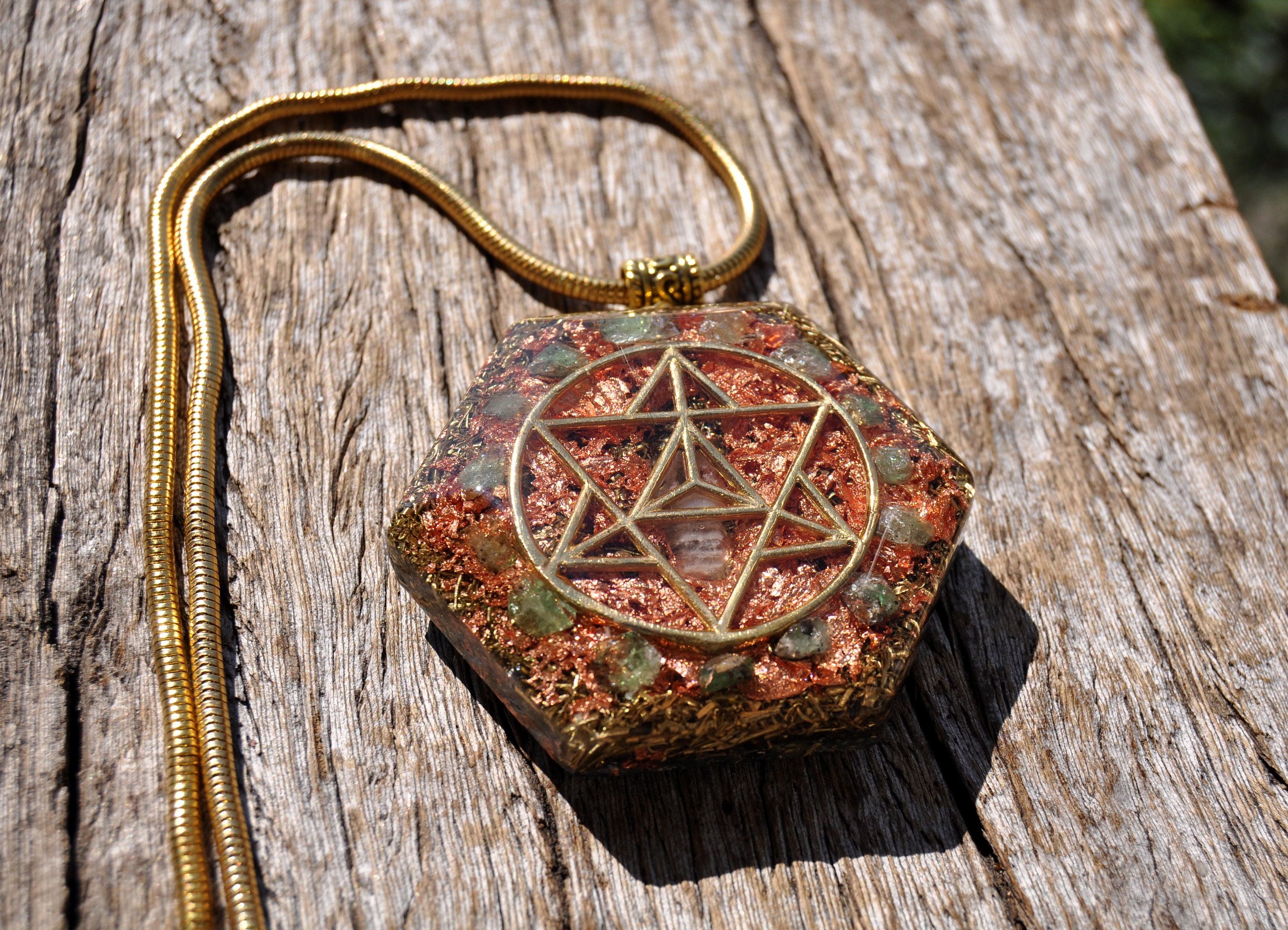 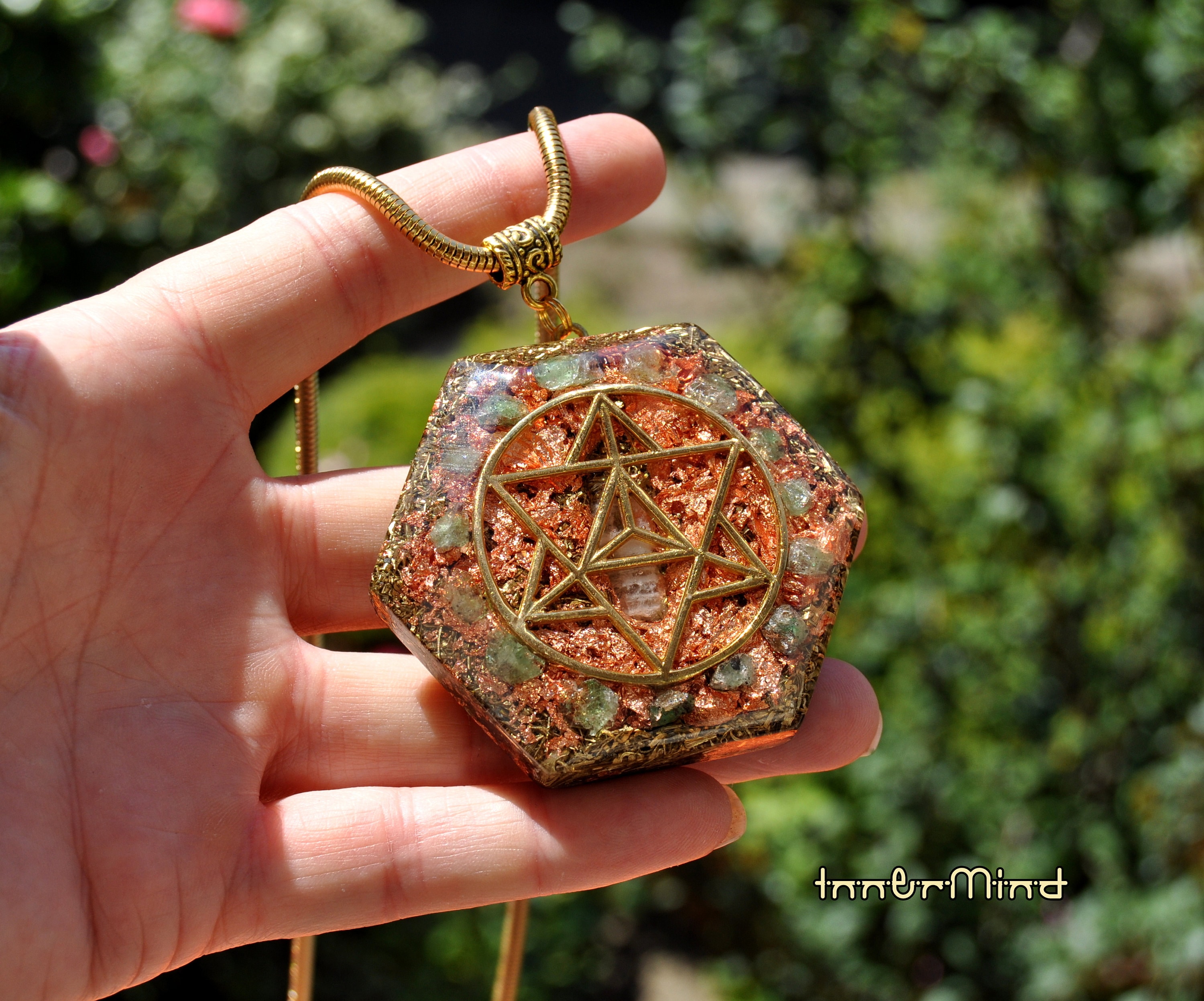 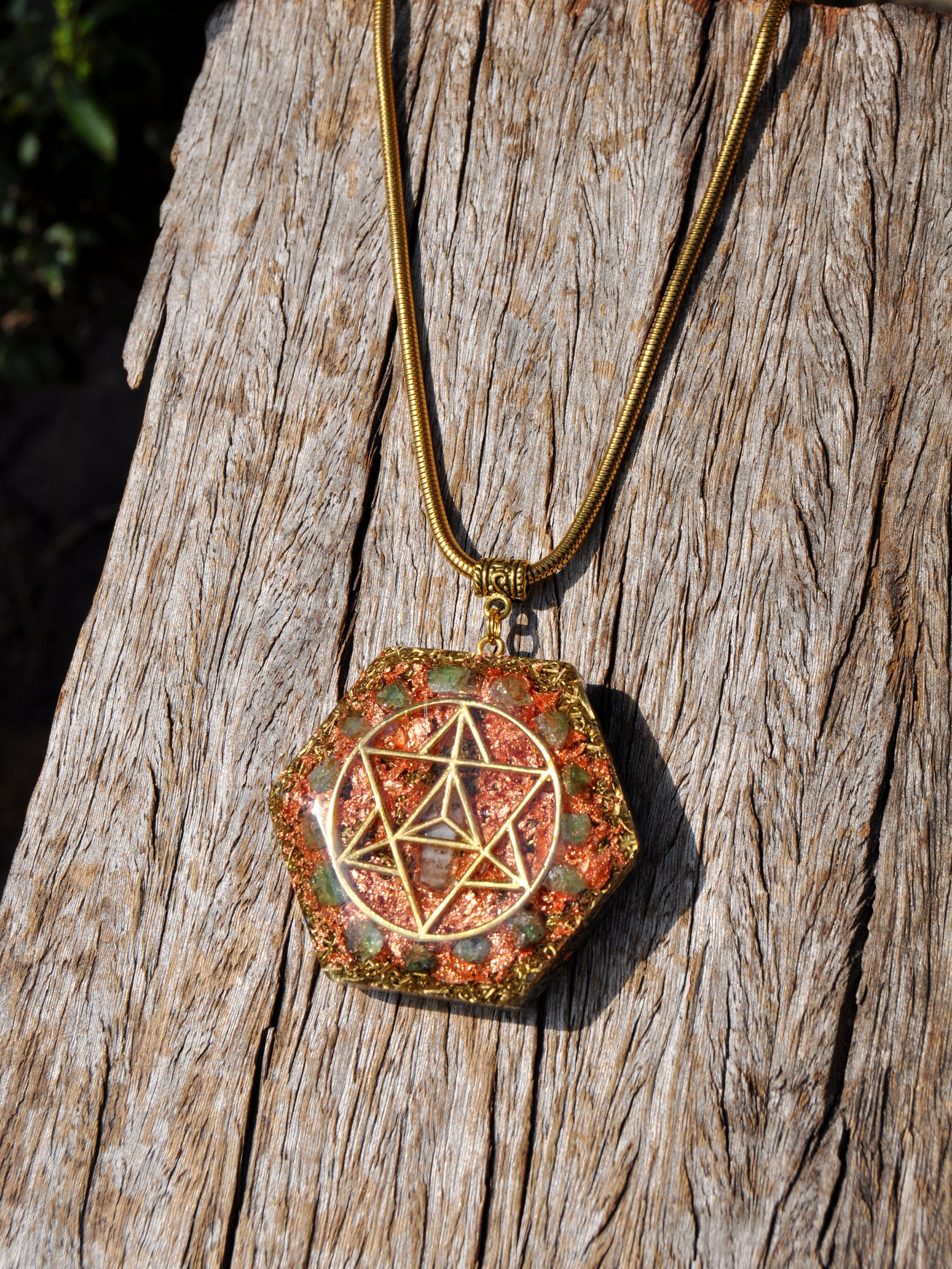 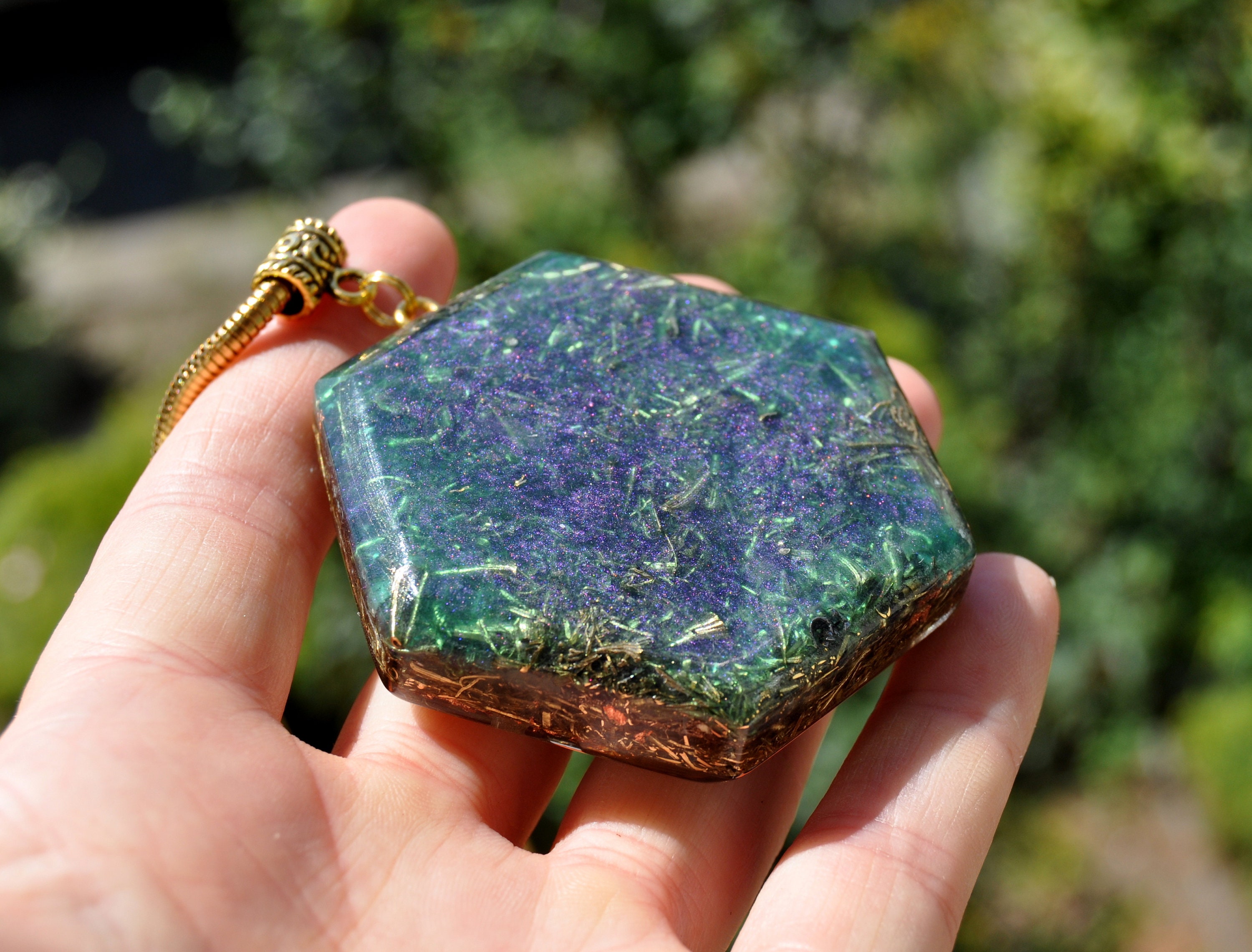 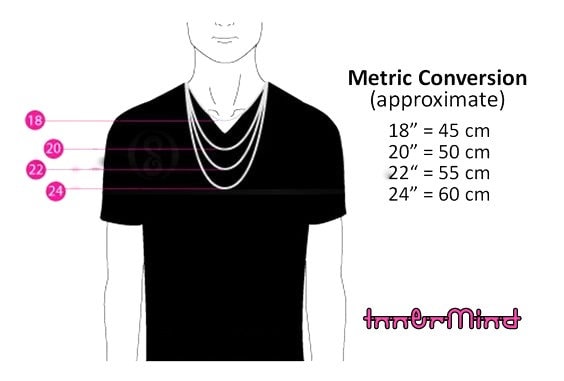 This unique design Orgonite® pendant features a Merkaba surrounded by green Garnet (Tsavorite) crystals in the front. In the middle of the Merkaba lays a natural terminated green Chlorite Quartz crystal. It furthermore consists of Elite Shungite (emf protection), Rose Quartz (self - love), Pyrite (to enhance and protect), black Tourmaline (to protect and ground excess energy) ,Rhodizite (to amplify the other crystals), Selenite (to clean and charge the other crystals) and clear quartz (for piezo-electric effect) all within a durable resin setting.

It consists of lots of copper and bronze shavings which is required for the pendant to properly clear stagnant energy according to Wilhelm Reich's research.

MERKABA
The word Merkaba is actually composed of three separate words: Mer, which means light, Ka, which means spirit and Ba, which means Body. Put together, these three words connote the union of spirit with the body, surrounded by light. The symbol, which takes the shape of a star, is believed to be a divine vehicle made entirely of light and designed to transport or connect the spirit and body to higher realms. Ancient Jewish texts reveal that the word is also the Hebrew for a chariot, and the Bible reveals that the word Merkaba itself is found in the Old Testament a total of 44 times.

It is said that the symbol is composed of two-star tetrahedrons, which consists of counter-rotating fields of light and energy that surrounds each person. This energy extends beyond the body. Some believe that even planets have this Merkaba energy field around it.

Quartz with Chlorite (or Chlorite Quartz) is a powerful variety of the Master Healer crystal. Through its deep connection with Mother Earth, this type of quartz can quickly absorb and dispel negative energy at its source. It is extremely useful for those looking to clear past troubles and create a positive home.

Green Chlorite in Quartz is a powerful healing combination. The Quartz amplifies the purifying, detoxifying properties of the Chlorite making it one of the best crystals to use for physical cleansing. Chlorite not only works with the physical body, but the auric body as well. Chlorite will help to cleanse the aura, chakras and energy meridians. Chlorite is a great piece to use when there is excessive anger or frustration, gently removing and dissipating the energy. Chlorite in Quartz will help to resolve issues of the heart and remove blockages and resistance that will allow one to acknowledge, forgive, release, and move forward.

Chlorite is also a wonderful stone to use to cleanse the environment, a sacred space, or home/office. With Quartz, Chlorite can help to clear negativity.

Quartz with Chlorite is thought to be especially resonant with the third eye chakra.

This pendant is created with loving intent to transform people’s lives for the better. It has been hand sanded through 7 sets of fine polishing paper so it has a dome design and it is shiney and silky smooth. Because it is a one of a kind hand-crafted one, it may have slight artistic imperfections.

Necklace including pendant weights 88 grams / 3.10 Oz due to lots of copper and bronze shavings.