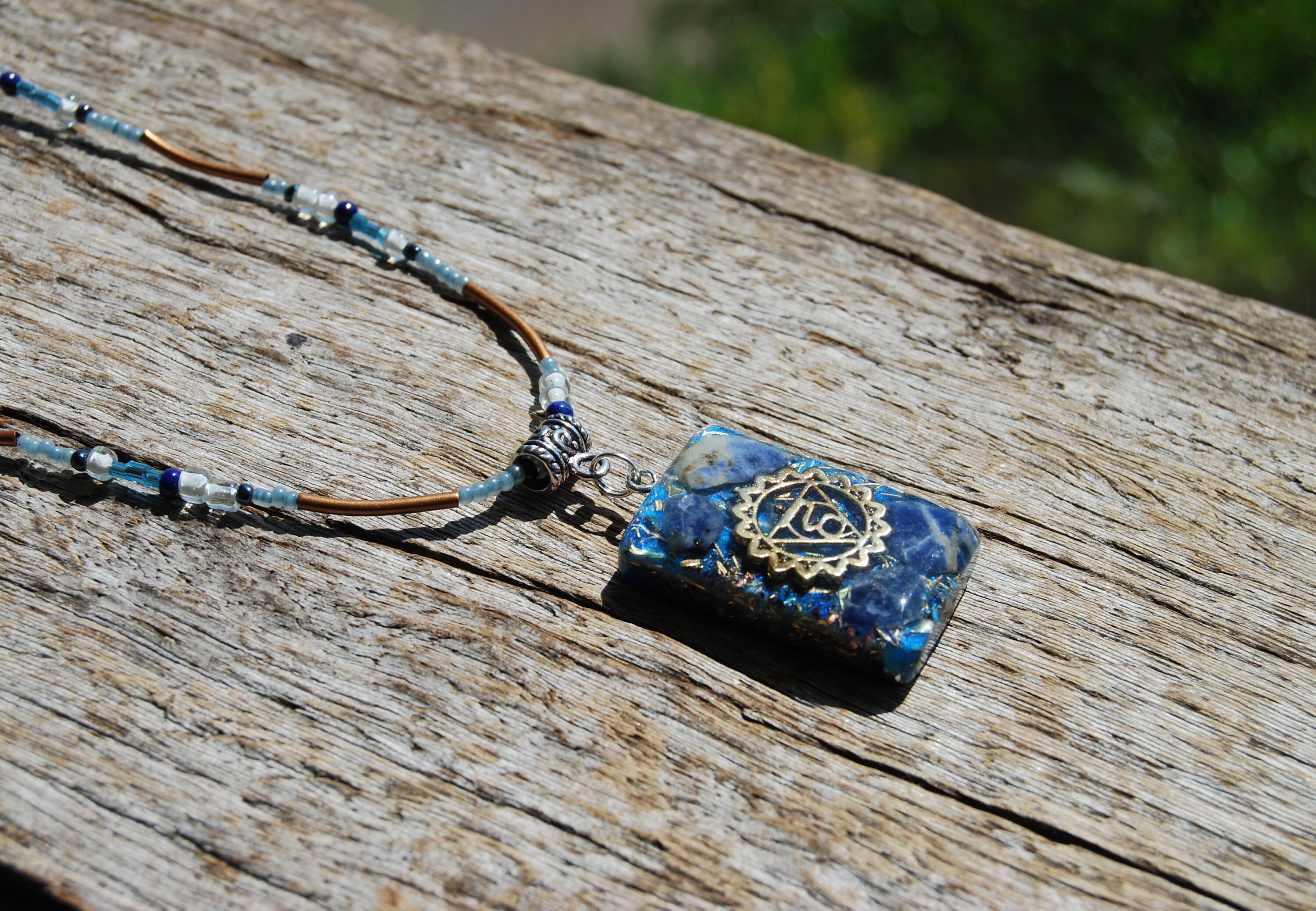 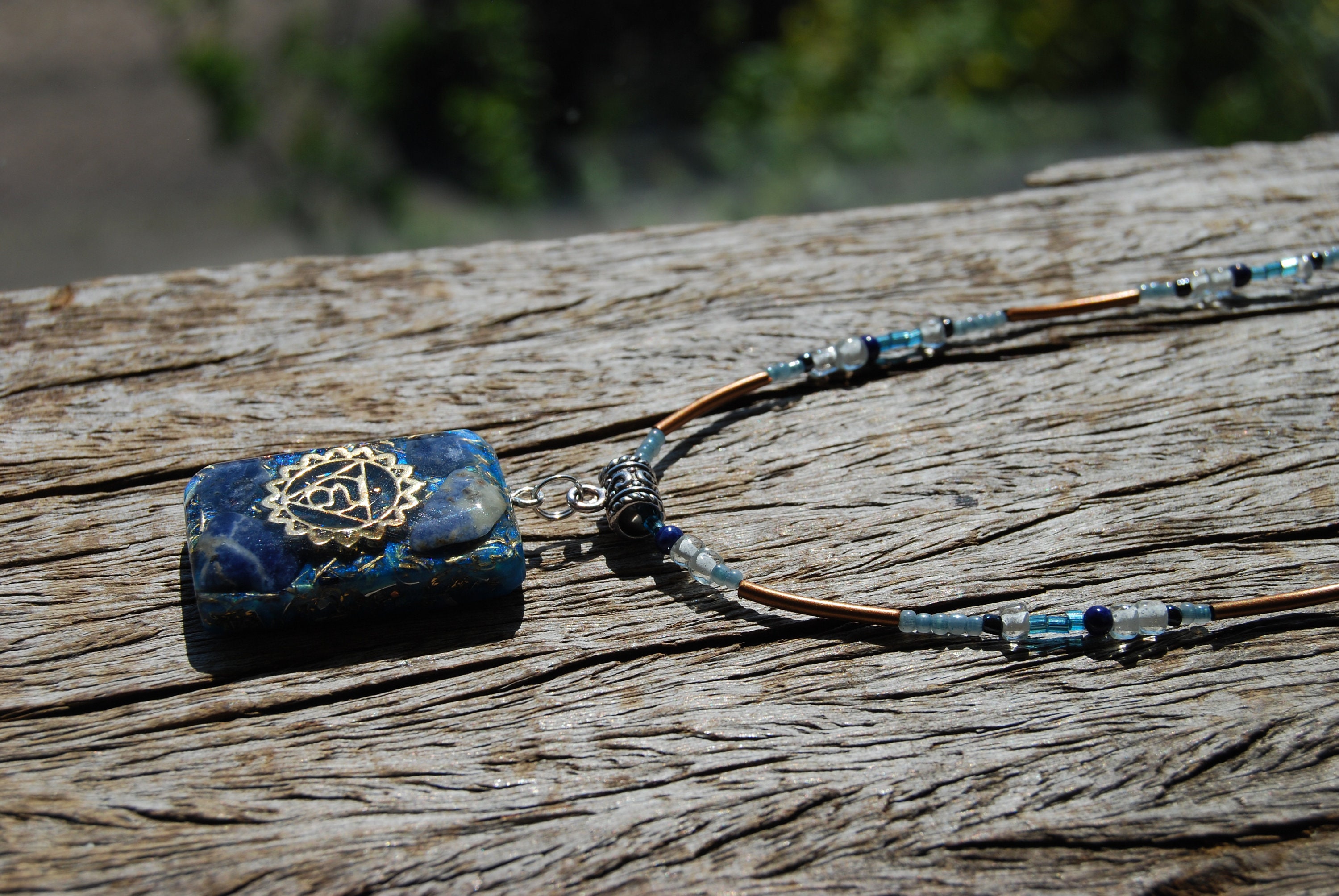 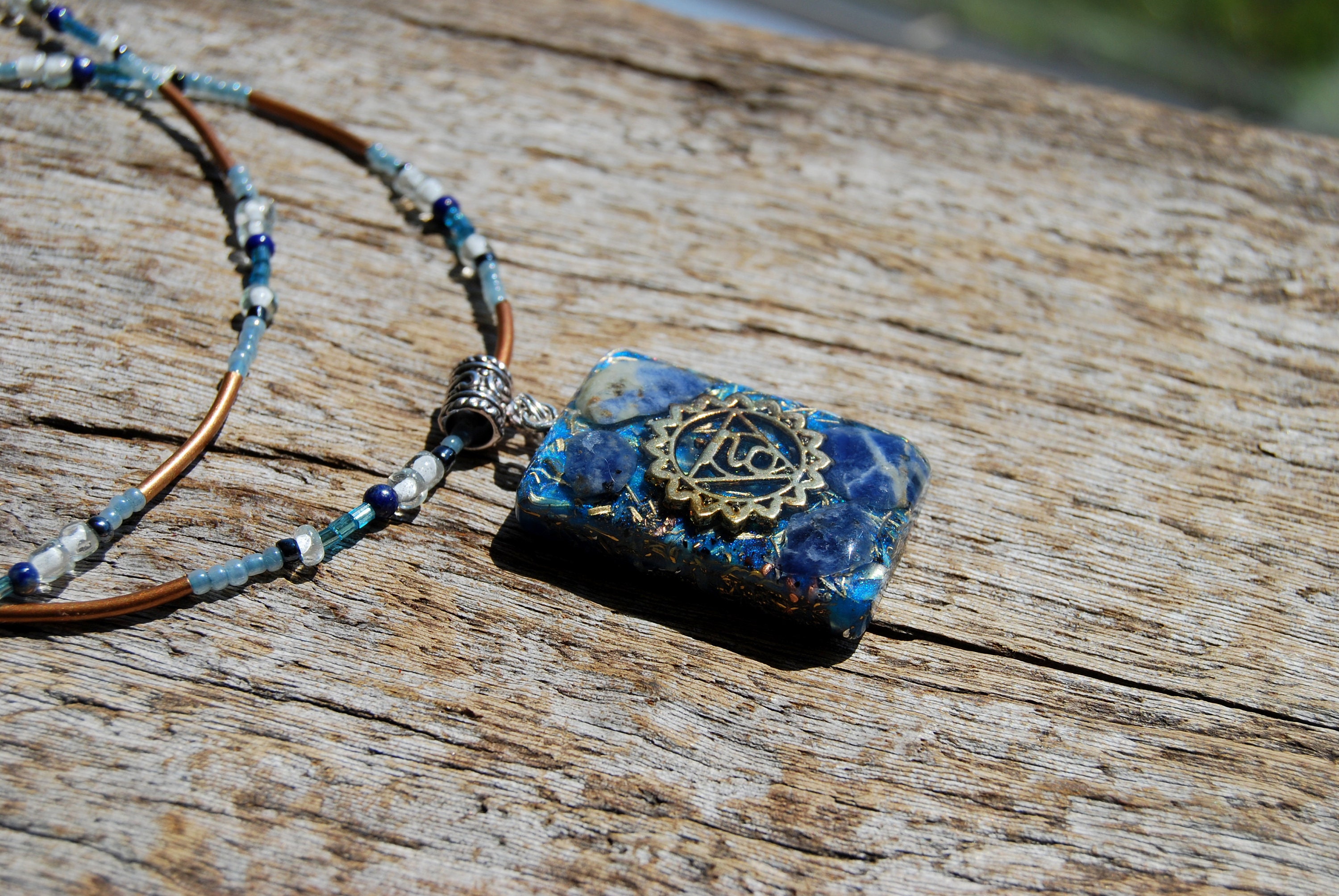 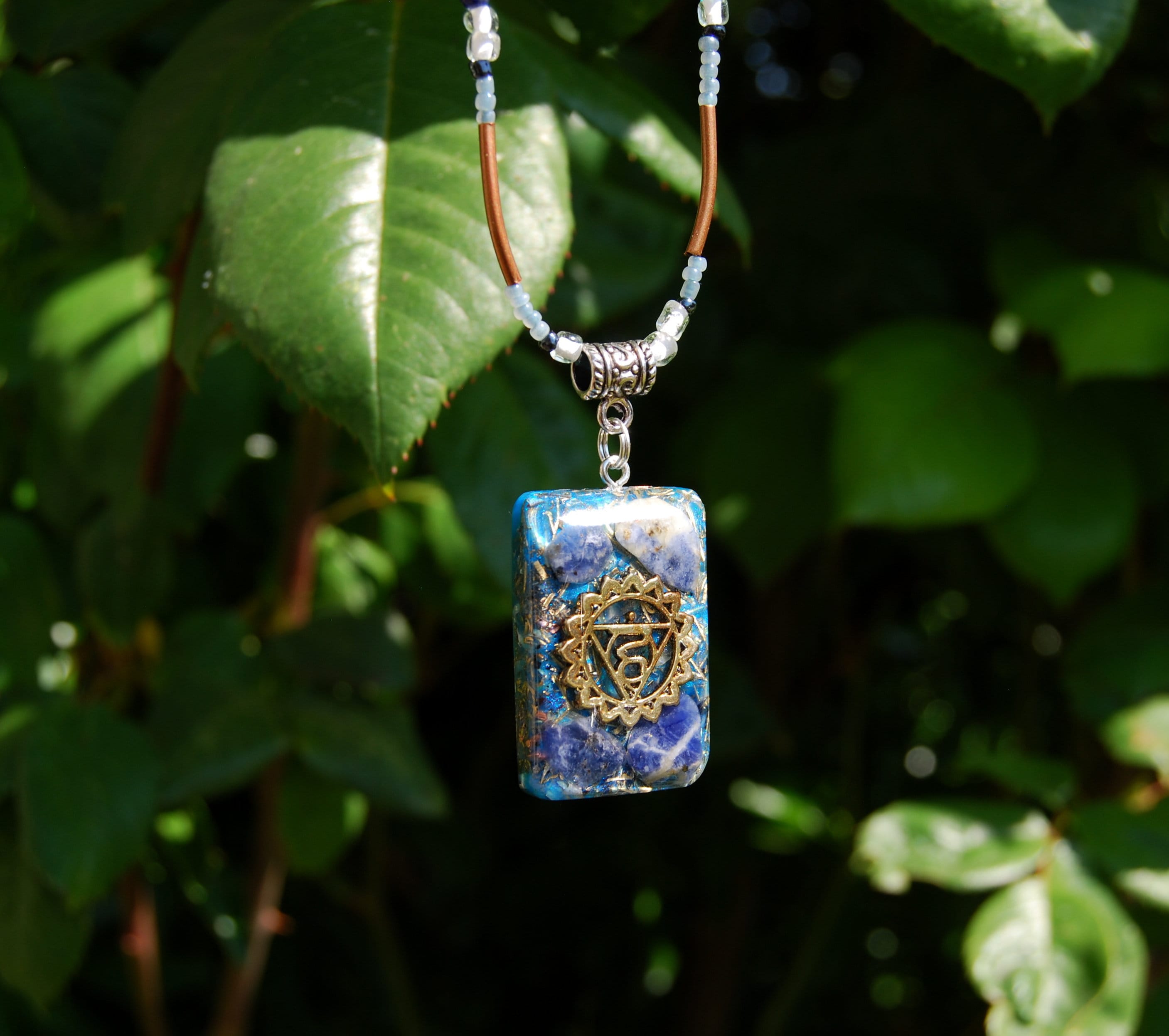 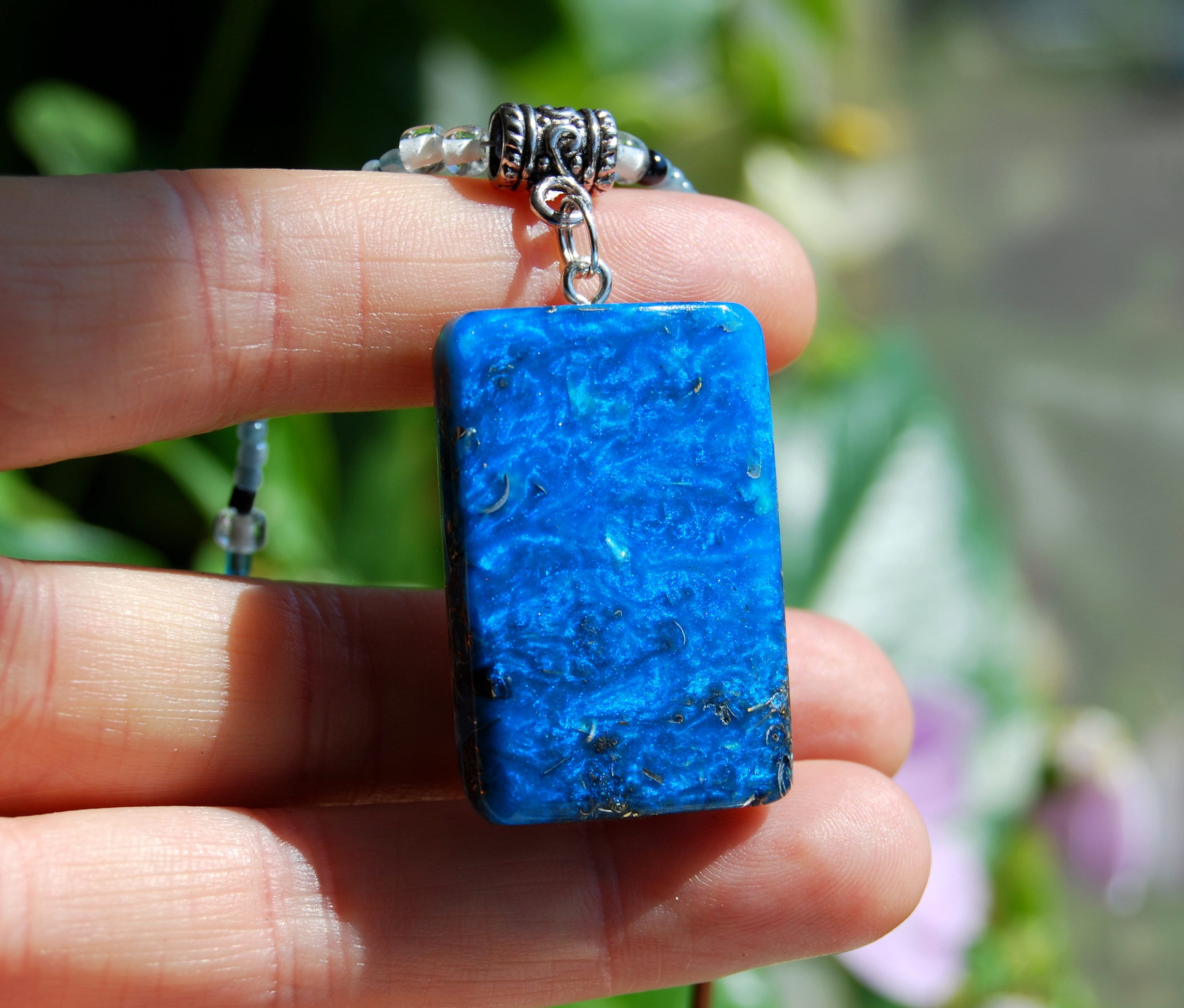 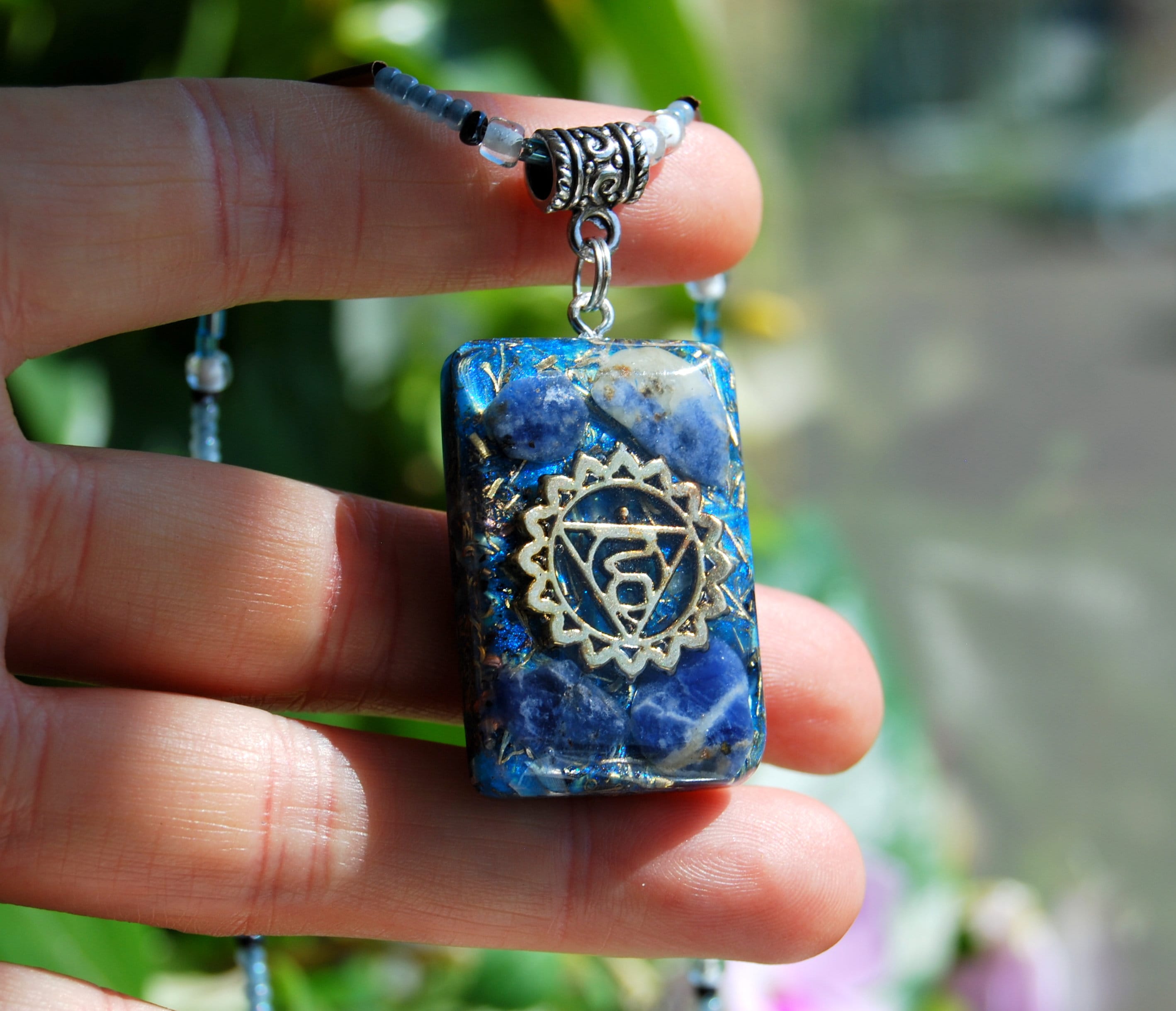 This unique Orgonite® pendant contains aluminium,bronze, brass and copper shavings. The main stone is natural blue Sodalite which you can see in the front around the sixth chakra symbol. Rhodizite (to amplify the other crystals), Pyrite (to enhance), black Tourmaline (to ground excess energy and for protection), Selenite (to clean and charge the other crystals) and clear quartz (for piezo electric effect) in a durable resin setting. You will get the necklace as shown in the pictures.

It comes on an beaded necklace with consists of glass beads, metal beads and it also has some Lapis Lazuli beads.

THROAT CHAKRA
The Throat Chakra is located in our throat and represents our ability to communicate verbally, physically (body language) and mentally (telepathically). Through this center we share how we feel, express our beliefs and also give voice to our inner being. Creative expression transforms negative feelings and keeps our energy flowing allowing our “inner self” to be seen and heard. When our throat Chakra is congested we can lose focus easily, lack concentration, always have to be doing something and not be able to relax.

Sodalite is a relative of Lapis Lazuli and Lazurite. It possesses a darker shade of blue than its sister stones.
The royal blue of Sodalite is often mixed with veins of white. These white bands are actually formations of Calcite.


One of the best uses of Sodalite is to wear it as a way to counter becoming too emotional. It offers a sense of detachment that is accompanied by a rational perspective.
Writers are especially attuned to the properties of Sodalite. When kept in the writer’s workspace, the stone promotes creativity and concentration.
This crystal can be placed near computers and other electronic equipment to mediate the effects of electromagnetic energy fields. It can also be carried by those who are sensitive to all energy fields.

Sodalite can be used in a group setting to promote harmony and cooperation. It helps individuals to function better as a team unit.
For this reason, team athletes will find that the stone strengthens the bond between teammates. It can also be used to support unity among two people in a relationship.
The stone works best as a calming influence. It should be kept in any environment where a sense of peace and tranquility needs to be restored.

Sodalite is considered a calming stone. Coupled with its focus on the head it can combine the rational and the spiritual.
Which makes sodalite an ideal stone to clear up problems. It can help to end arguments because it makes clear communication possible.

Sodalite is especially useful for creative people, the combination of heart and mind makes it possible to make your visions a reality. The calming effect can help create order in the chaos that often surrounds creative types.

It’s chakra is the 5th chakra, which is also known as the throat chakra. Sodalite is associated with the thyroid. It is perfect in a necklace. Wear it when you want to lose a few pounds. It helps in communicating and will give confidence to speak more.

Because it is a one of a kind hand-crafted one, it may have slight artistic imperfections.
It comes on a 58 cm / 23 inches beaded necklace with lobster clasp closing.