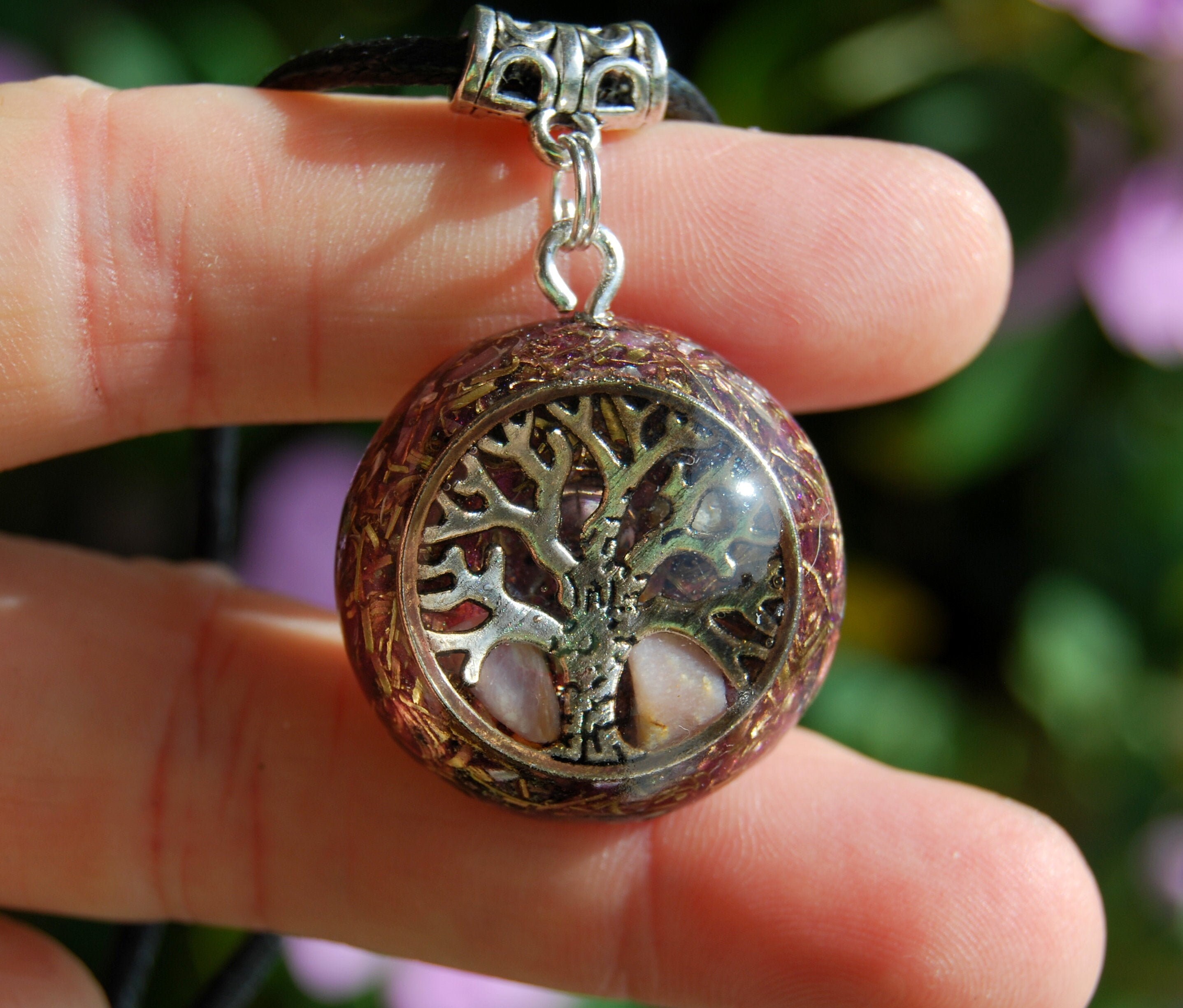 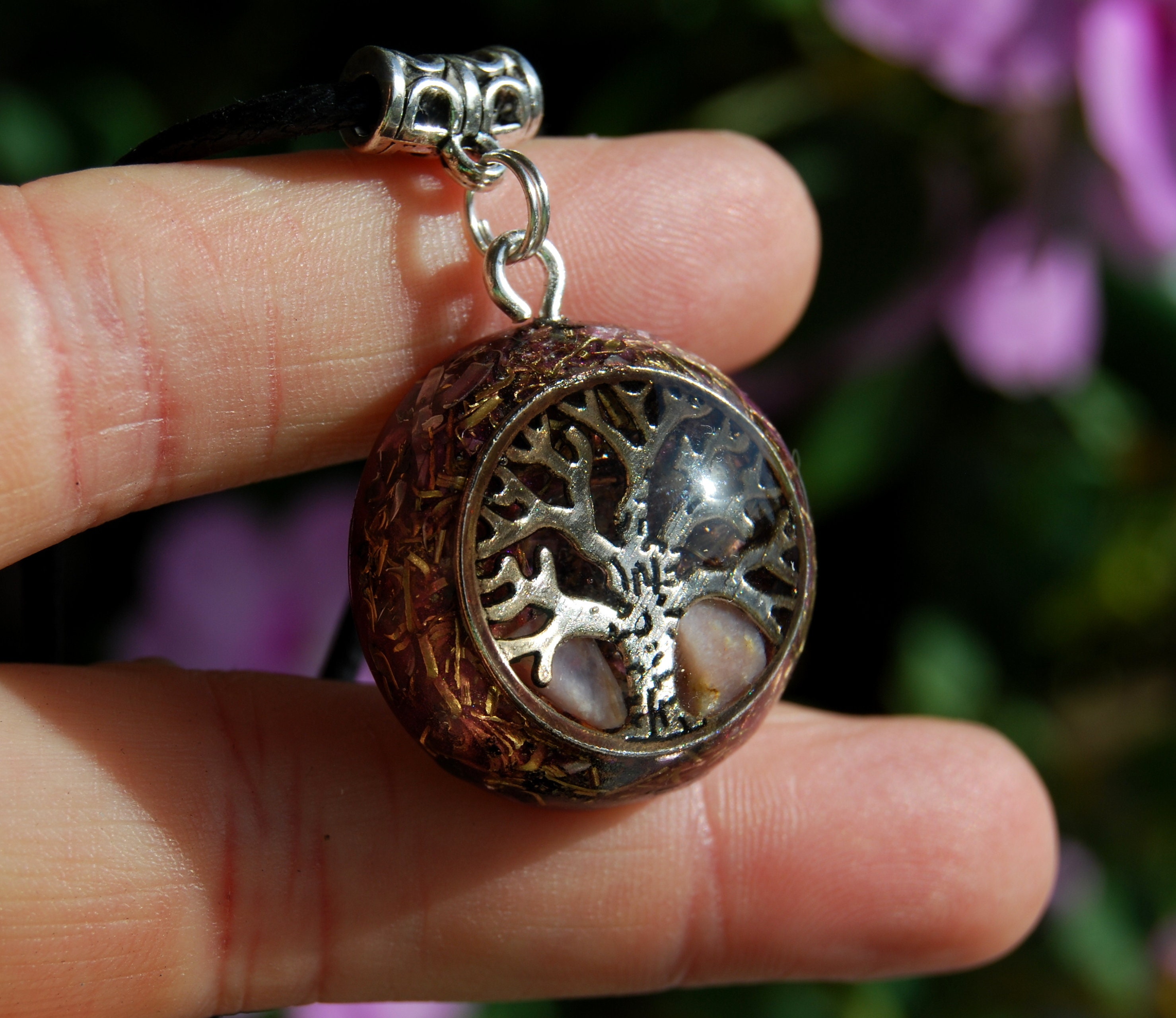 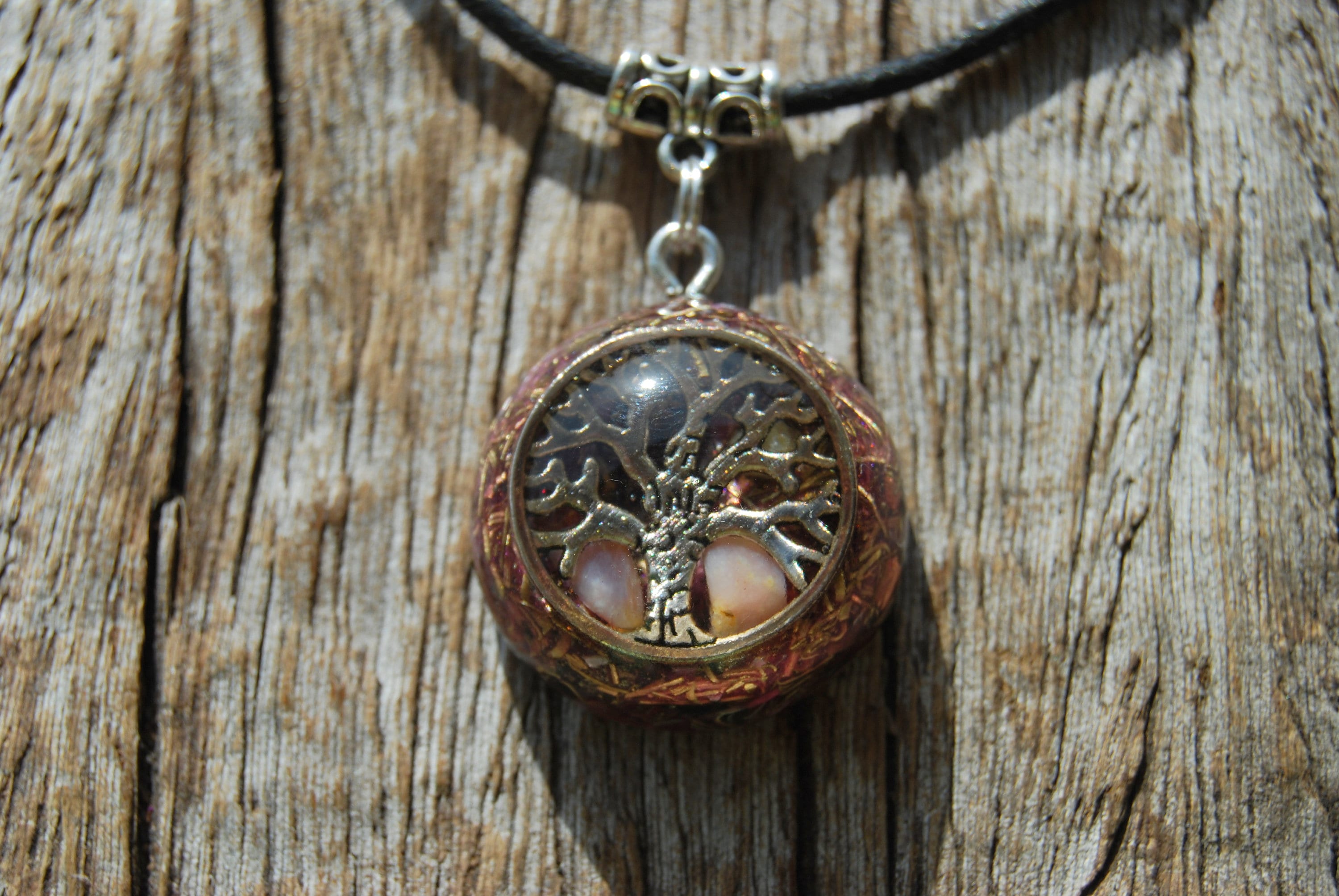 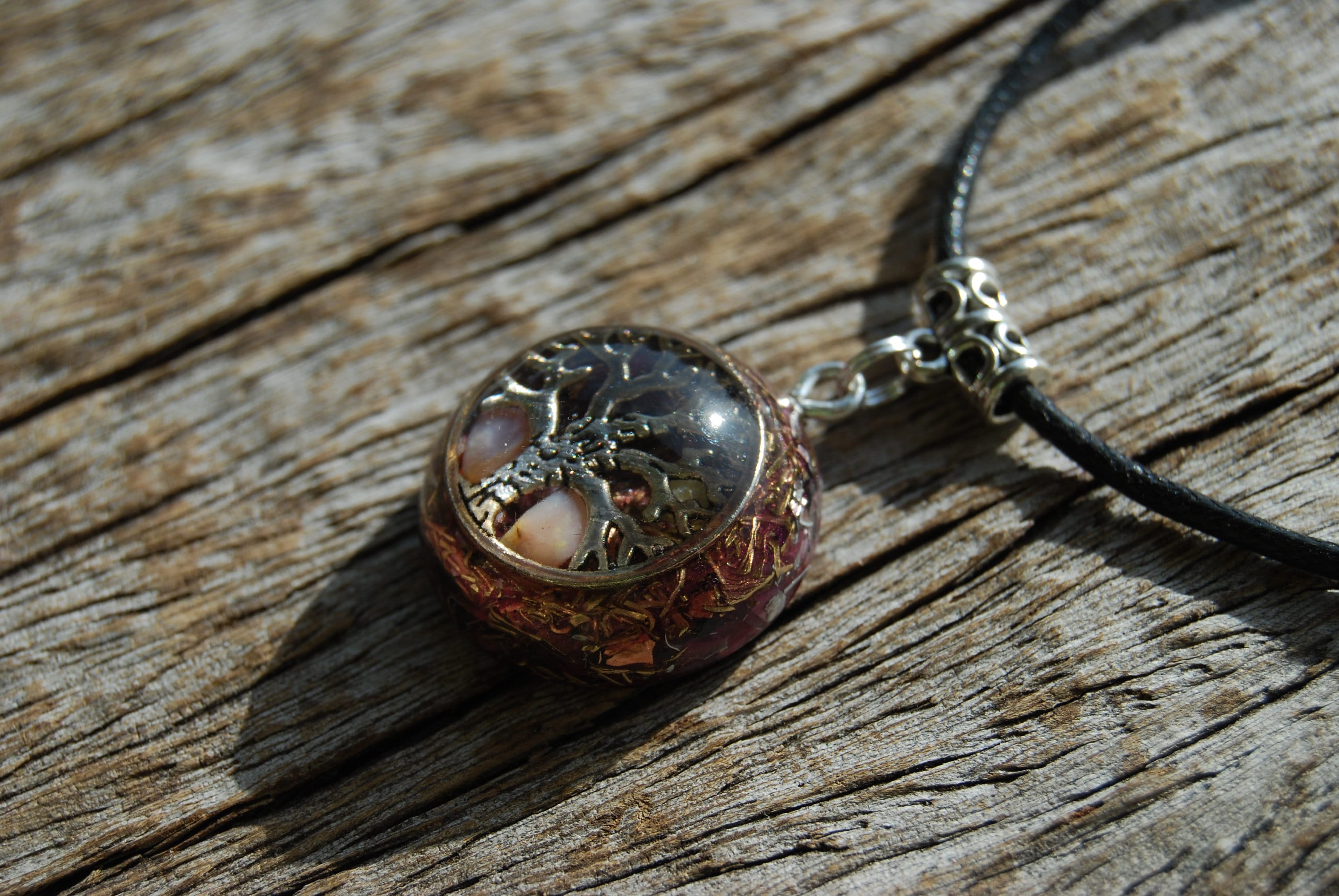 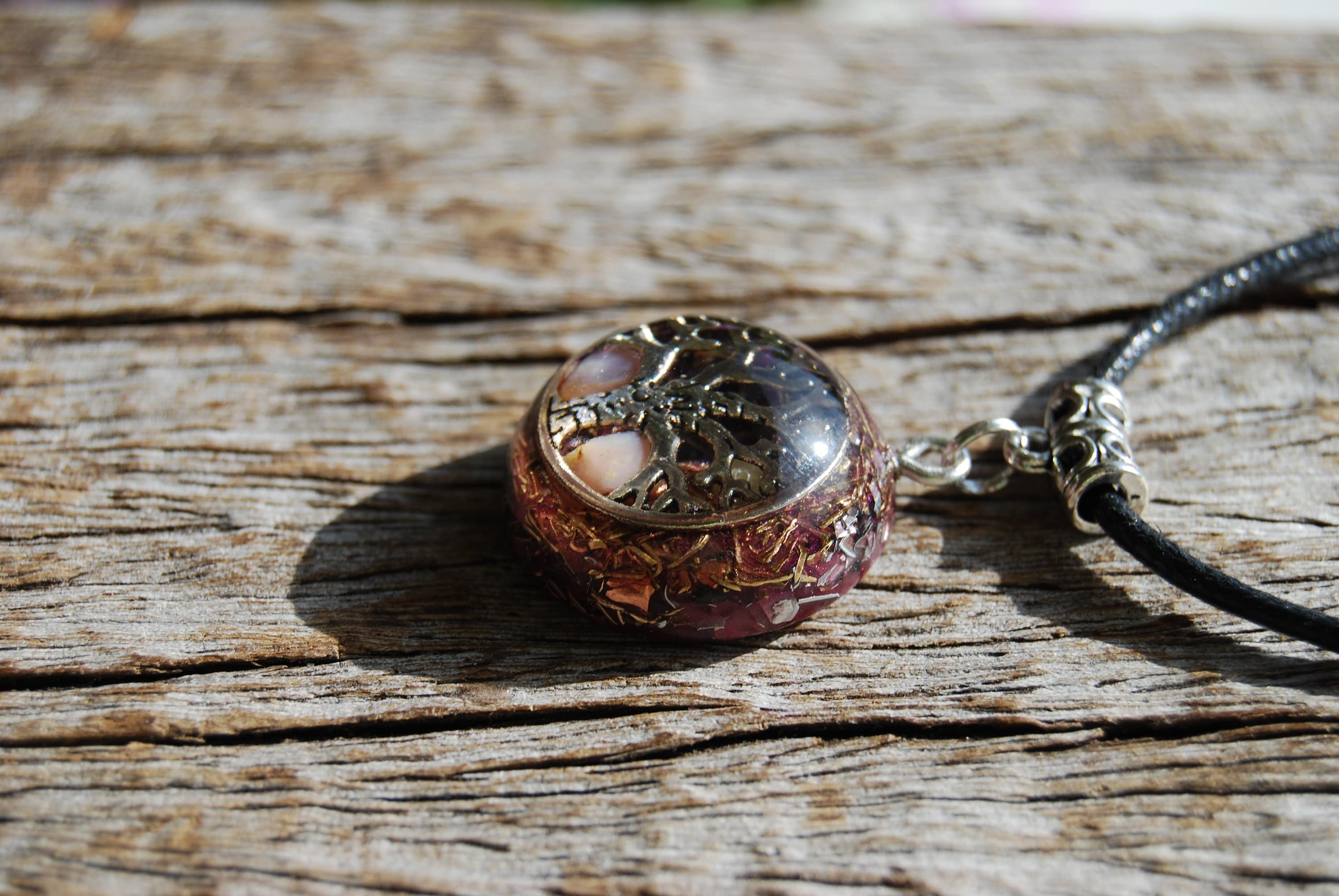 This lovely 2.7 cm / 1.1" in diameter orgone pendant contains brass, aluminum and copper shavings. The main stone is aunthentic pink Opal which you can see in the front. It furthermore contains a base mix within the metal shavings of Pyrite (to enhance), Rhodizite (to amplify), black Tourmaline (to ground and protect), Selenite (to charge and clean) and clear Quartz (for piezo electric effect) all within a durable polyester resin setting for optimal shrinkage/pressure on the quartz.

Pink opal vibrates at a more gentle frequency and this enhances its calming and soothing effect on the emotional body. It is well suited for very sensitive people, loving people, and people who are in need of healing the wounds of the heart and working with the heart chakra. Pink opal clears and calms the heart and brings a sense of love, peace, and tranquility to one’s aura. It can be used or worn to keep one’s connection to the angelic realms open and clear. Pink opal is a lovely stone for healing the emotions, especially those connected with subconsciously held pain.

Pink opals are also associated with past lives and the world of dreams. They have often been used to stop nightmares. It is said that meditating and sleeping with pink opals help one resolve any painful remembrances, allowing a gentle and loving compassion for one’s self. They are very helpful in relieving fear, worry, or anxiety; they are helpful in dissipating stress and allowing one to be more centered and calm. Pink opal soothes the heart and physically has been known to stabilize any irregular heart beat. It supports the lungs and the utilization of oxygen in the body. It is a gentle and loving stone for anyone dealing with respiratory issues.

Pink opals can also enhance cosmic consciousness and bring joy and creativity. They are sometimes used when a keen sense of intuition is required.