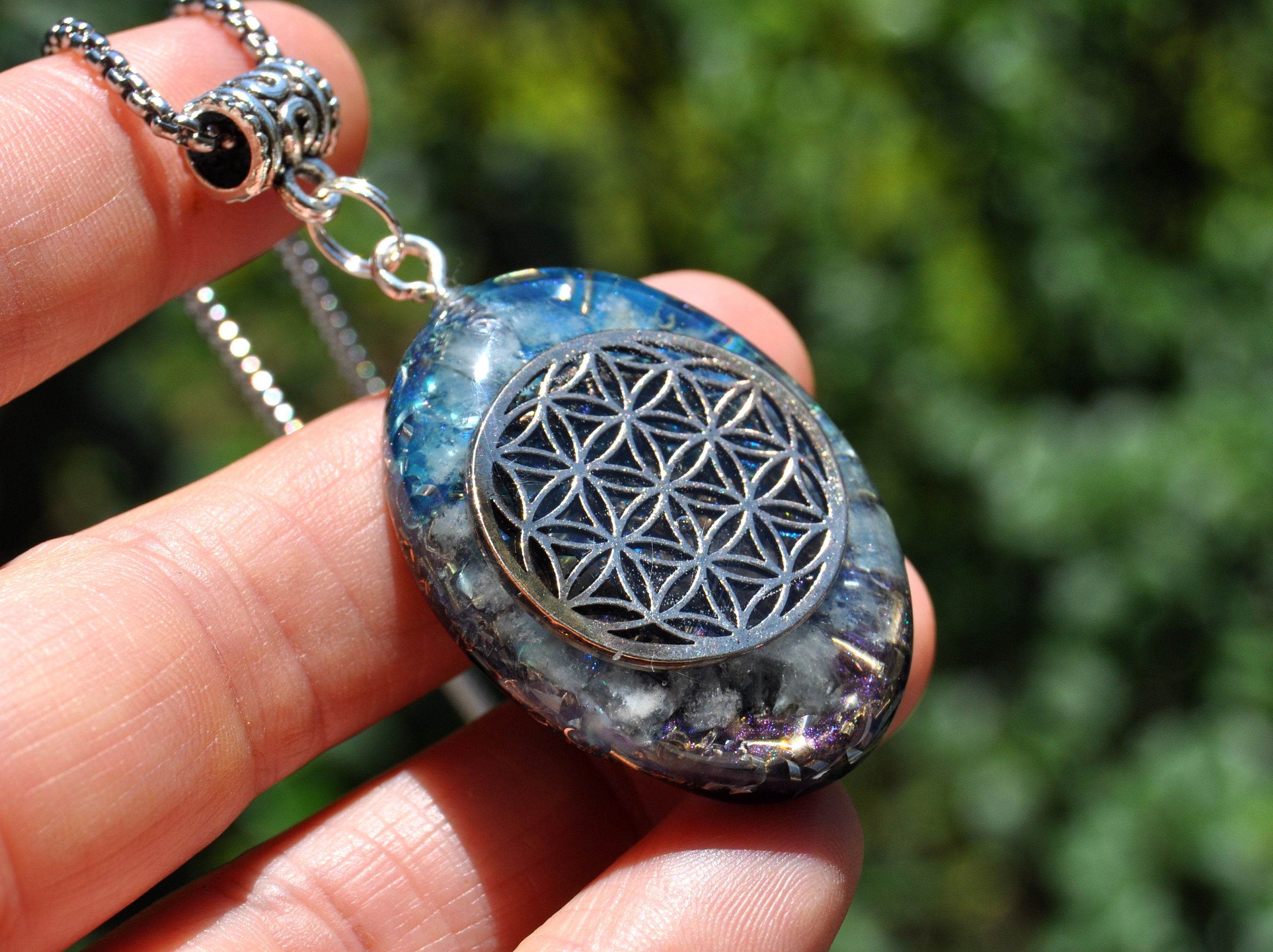 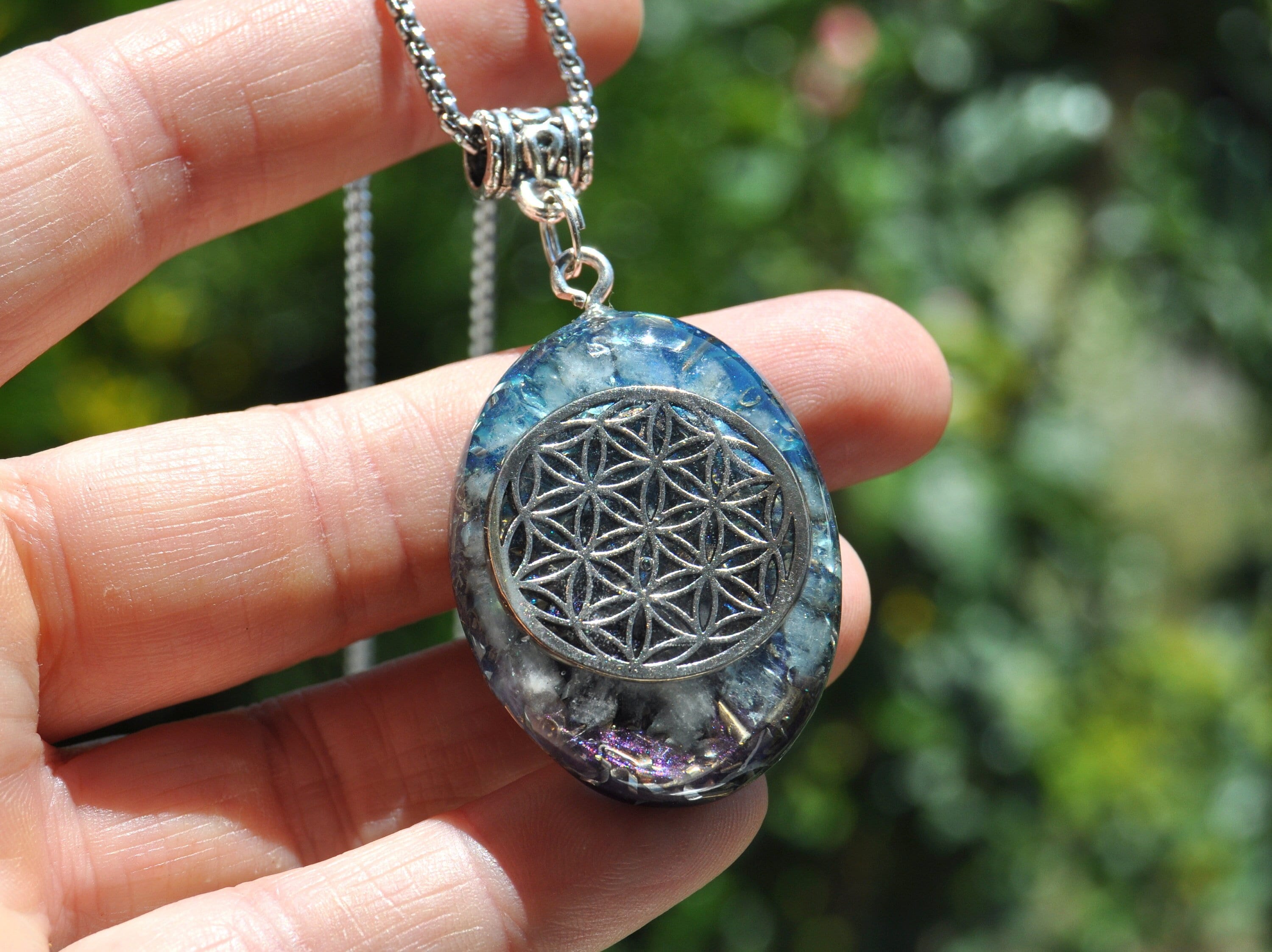 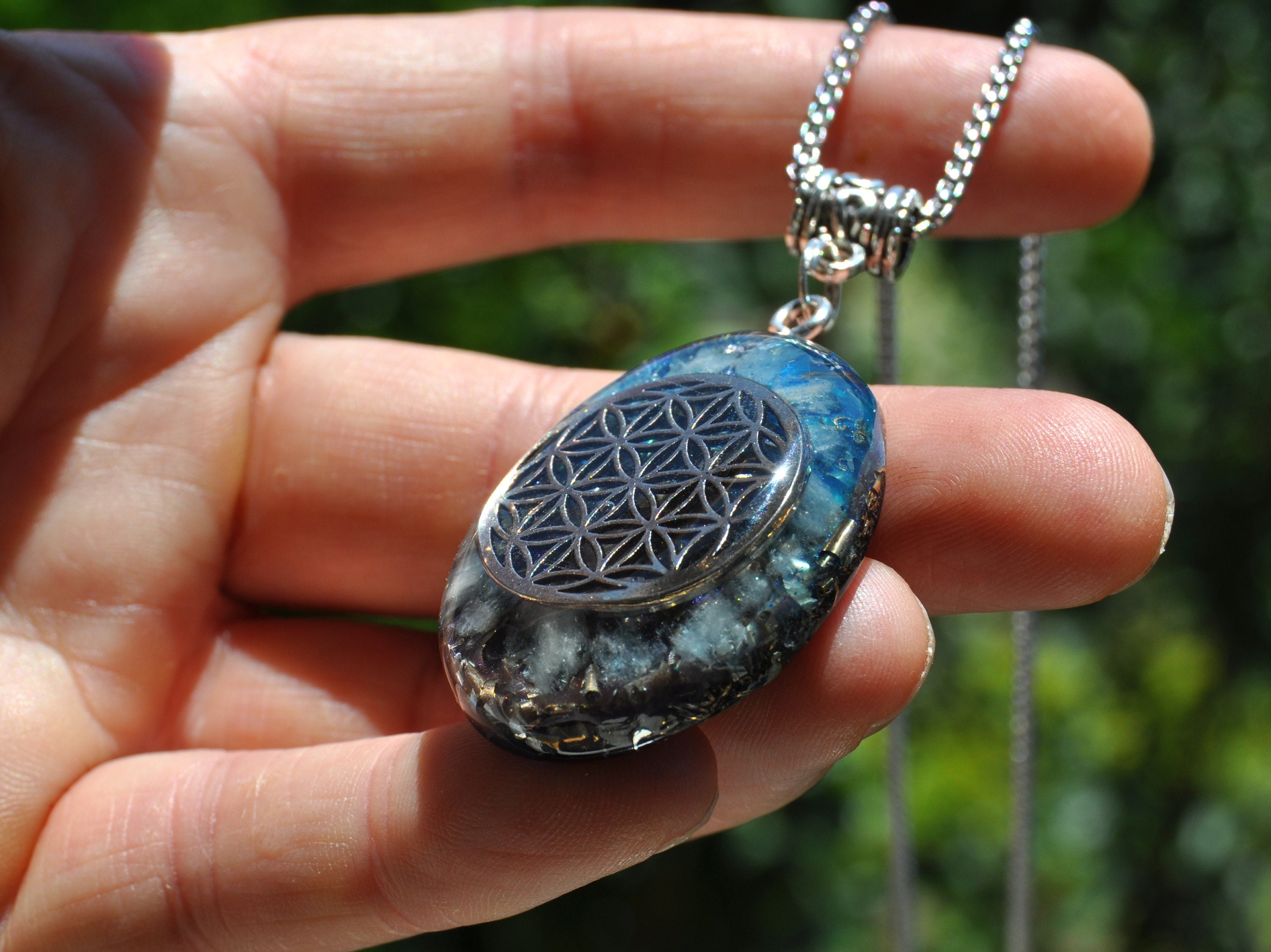 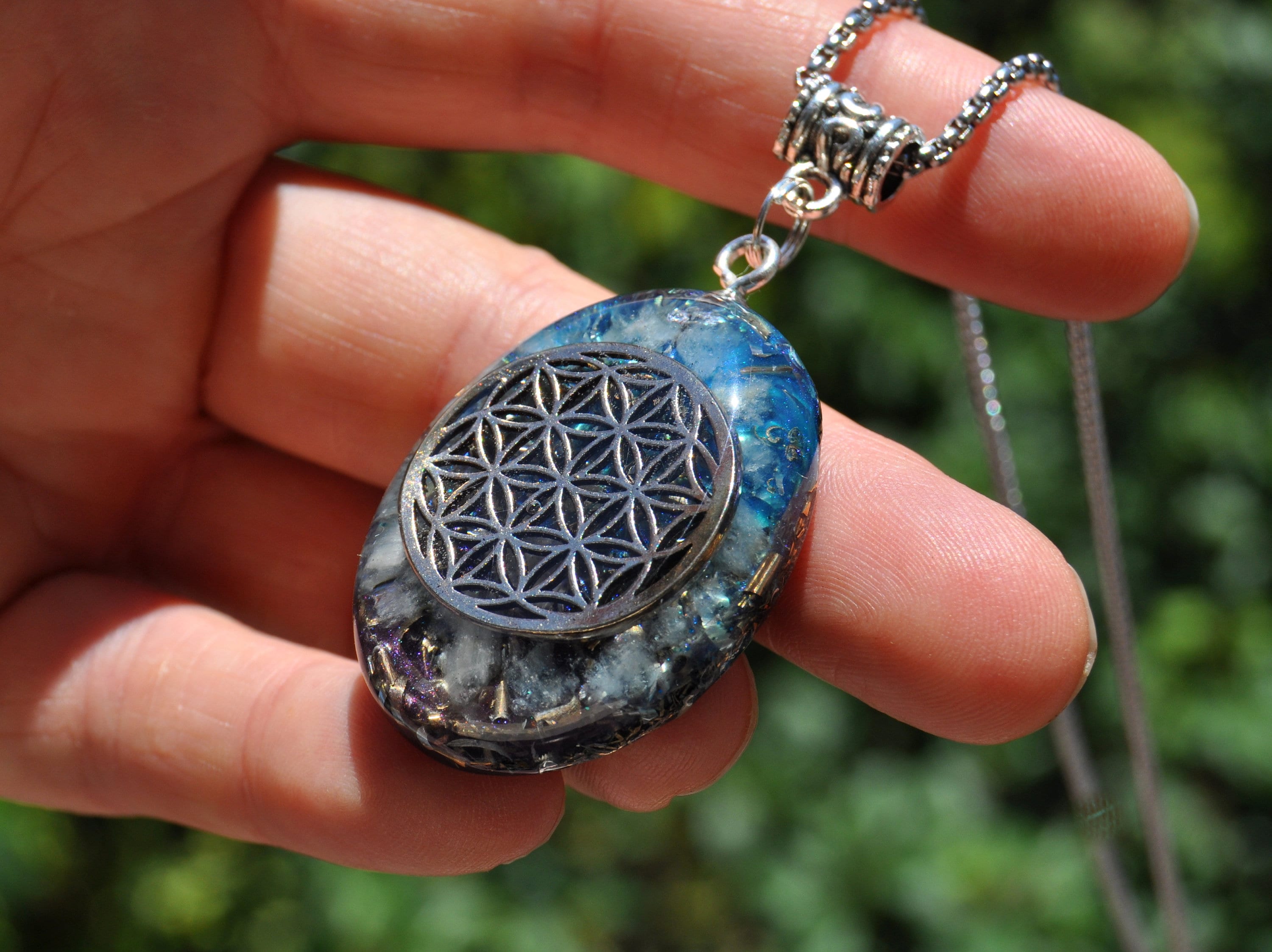 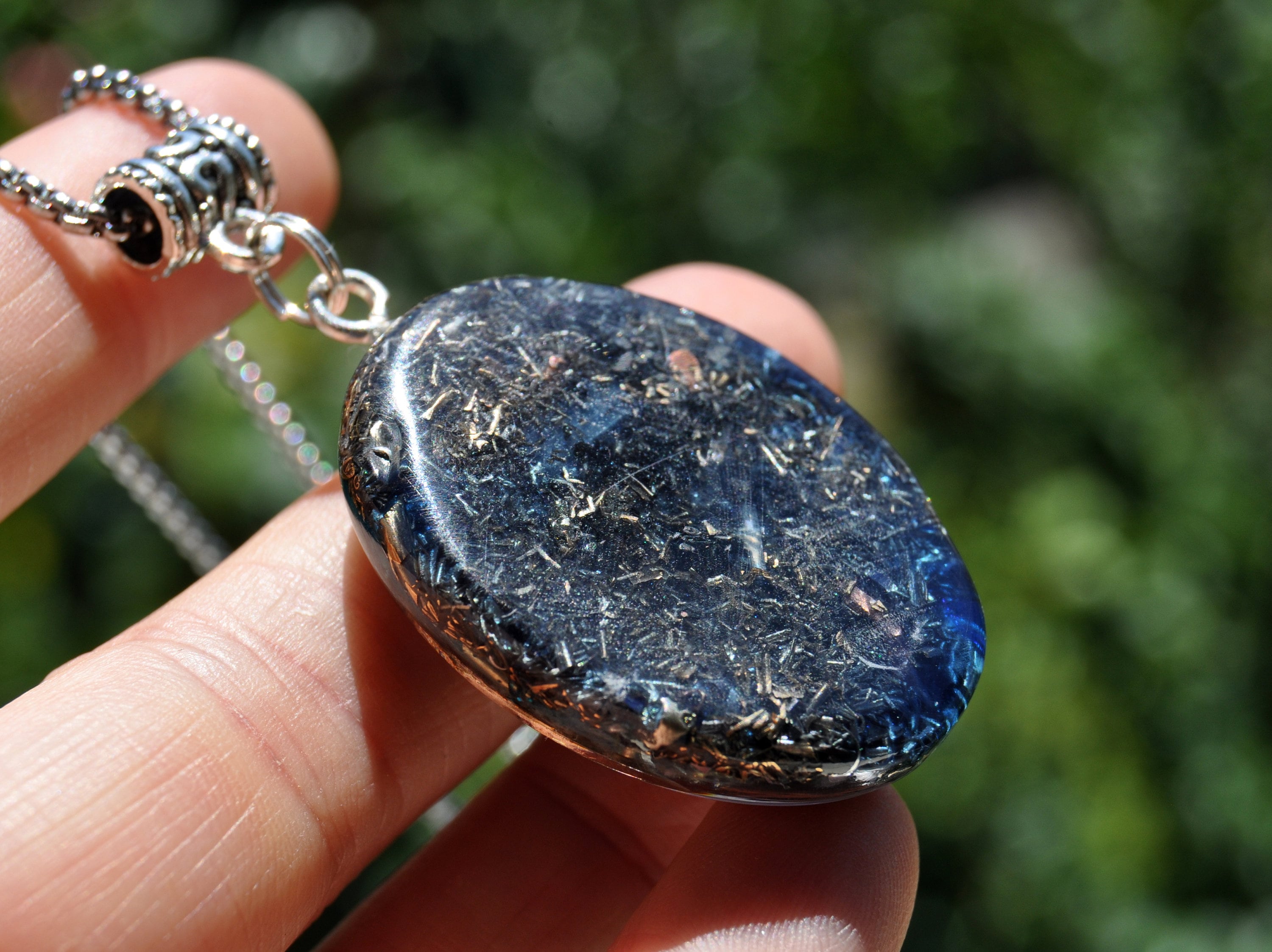 This lovely Orgonite® pendant contains aluminium, bronzes copper and brass shavings. It features Aquamarine (front), Pyrite (to enhance the overall strength of the piece), Rhodizite (to amplify the stones), black Tourmaline (to ground and protect), Shungite (protection), Selenite (to charge and clean) and clear Quartz (for piezo electric effect) all within a durable resin setting.

Although aquamarine has quite a range of uses, it’s strongest energies are in the field of opening up the psychic. If you are especially sensitive to the thoughts and vibrations of other people, wear aquamarine with smoky quartz, as this combination will ease the sharpness of the incoming impressions, and the quartz will help to ground you in the physical. In this manner you may avoid being overcome by unwanted impressions.

Associated with the Throat chakra, Aquamarine helps overcome the fear of speaking, and is an excellent stone for teachers and presenters of all types. It relaxes speakers to a stage of consciousness in which they are fully aware of their own truths, wisdom and feelings, and able to articulate them with clarity and conviction. It also allows one to speak clearly and without anger in difficult situations.

Aquamarine is a Water element stone, powerful for cleansing the emotional body and opening communication. Its gentle energy brings emotional patterns to the surface and assists in understanding the reason for holding onto old thoughts or patterns that are limiting forward motion. It also identifies where ego is causing one to overreact, assume a victim/abuser role, manipulate others, or martyr oneself. By consciously releasing these patterns, it allows for better relationships, love and compassion.

Aquamarine helps balance excessive anger or fear, and clears past emotional, physical or verbal abuse. It is an excellent stone for children who have been through traumatic situations and are acting out aggressively or who have disassociated from their emotional bodies. It heals the effects of over-judgmental parents who set impossible standards, and panic attacks lingering from guilt and inadequacy into adulthood.

Aquamarine is useful for moving through transition and change, its cleansing energy removing resistance and helping one overcome fear of the unknown. It helps not only in the release of emotional baggage, but the clearing out of physical items and clutter

Because it is a one of a kind hand-crafted one, it may have slight artistic imperfections.
It comes on a 50 cm / 20 inches necklace with lobster clasp closing.