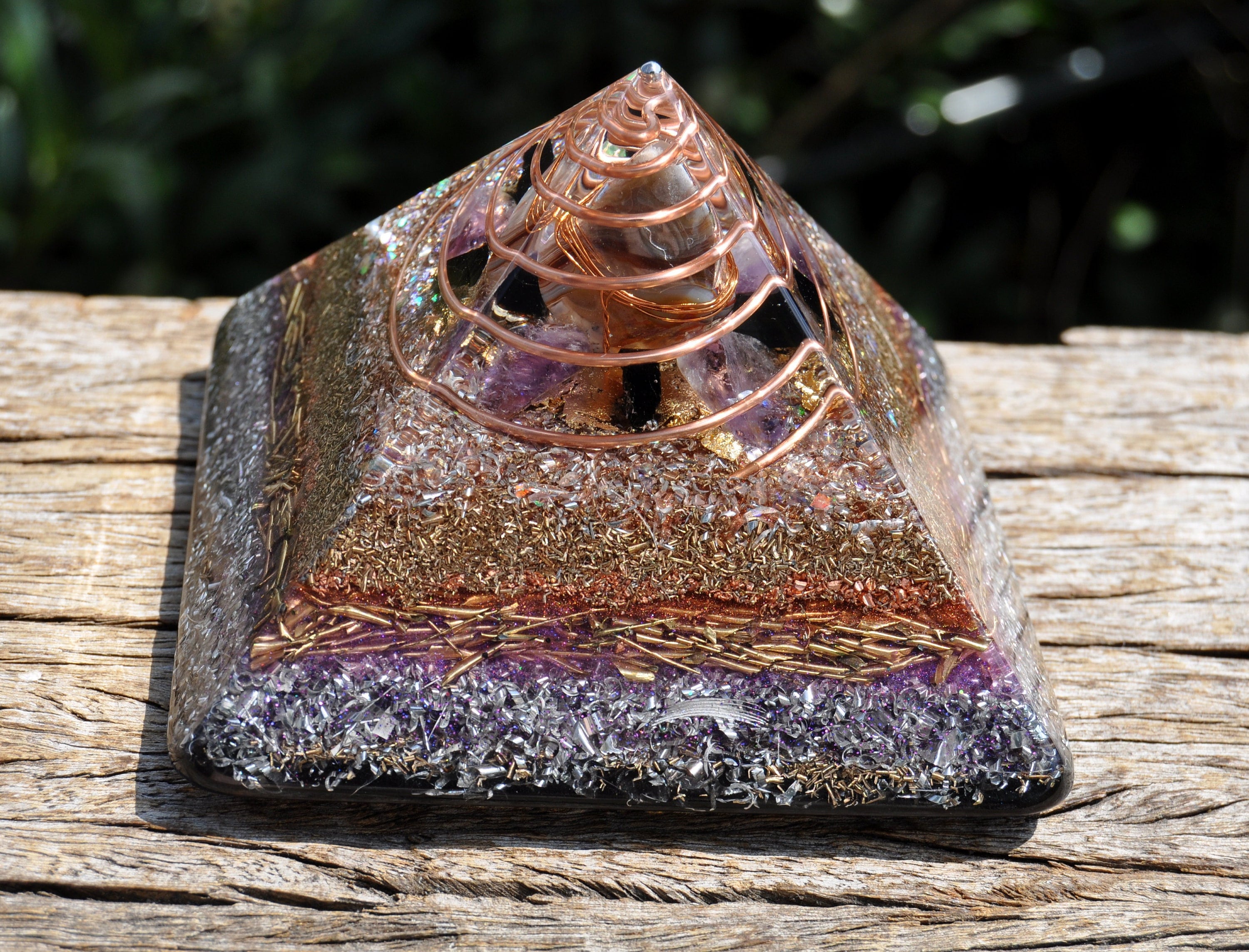 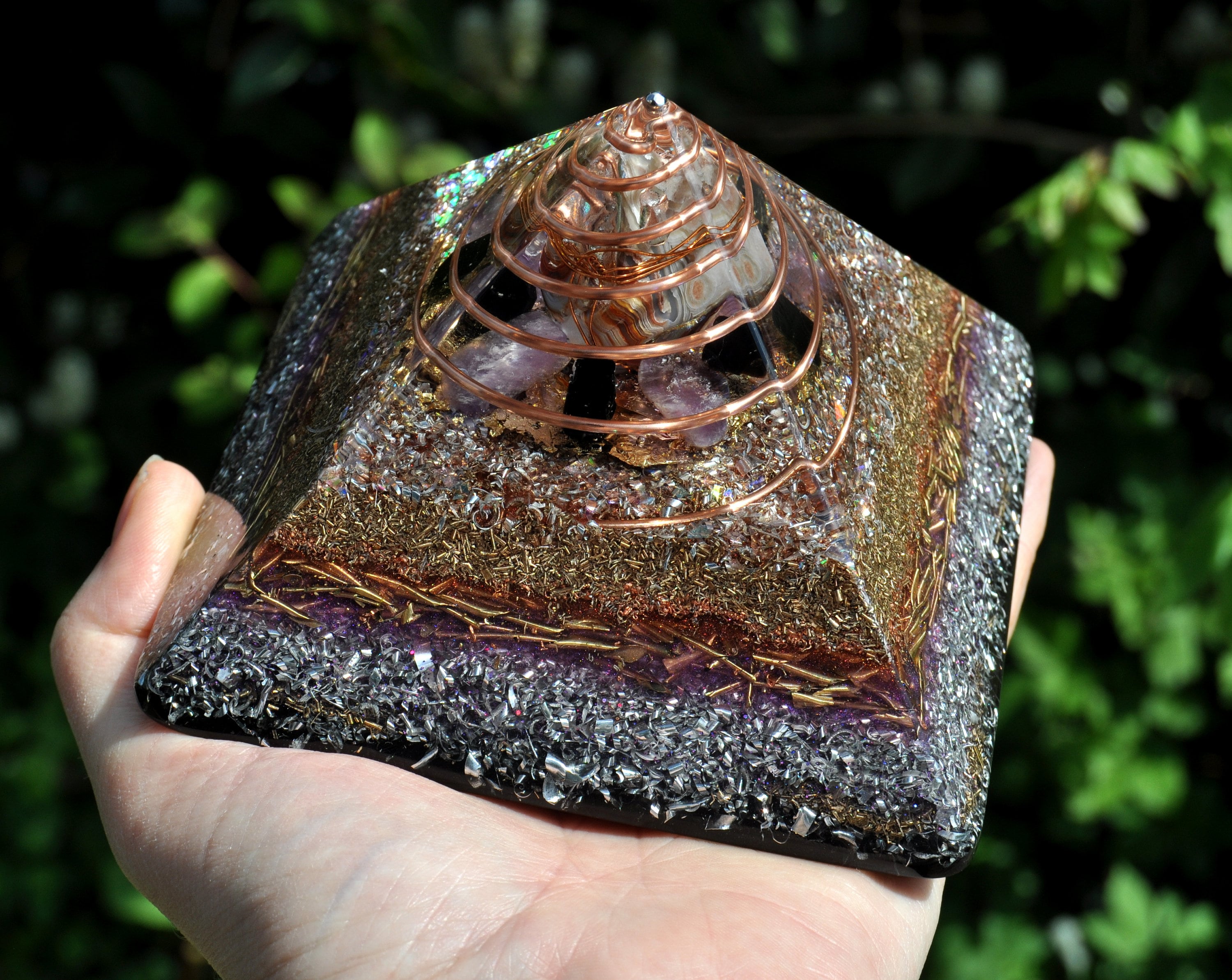 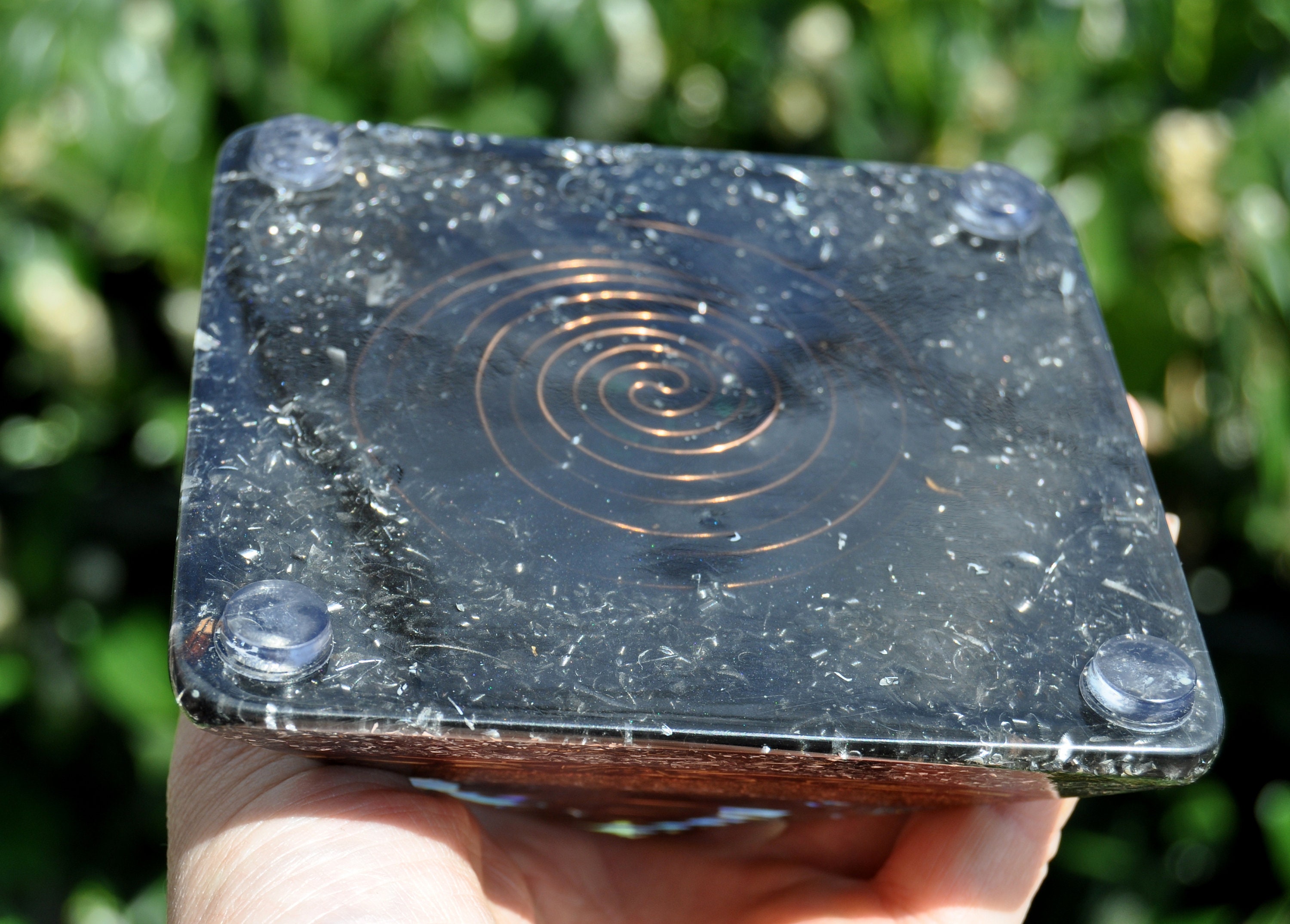 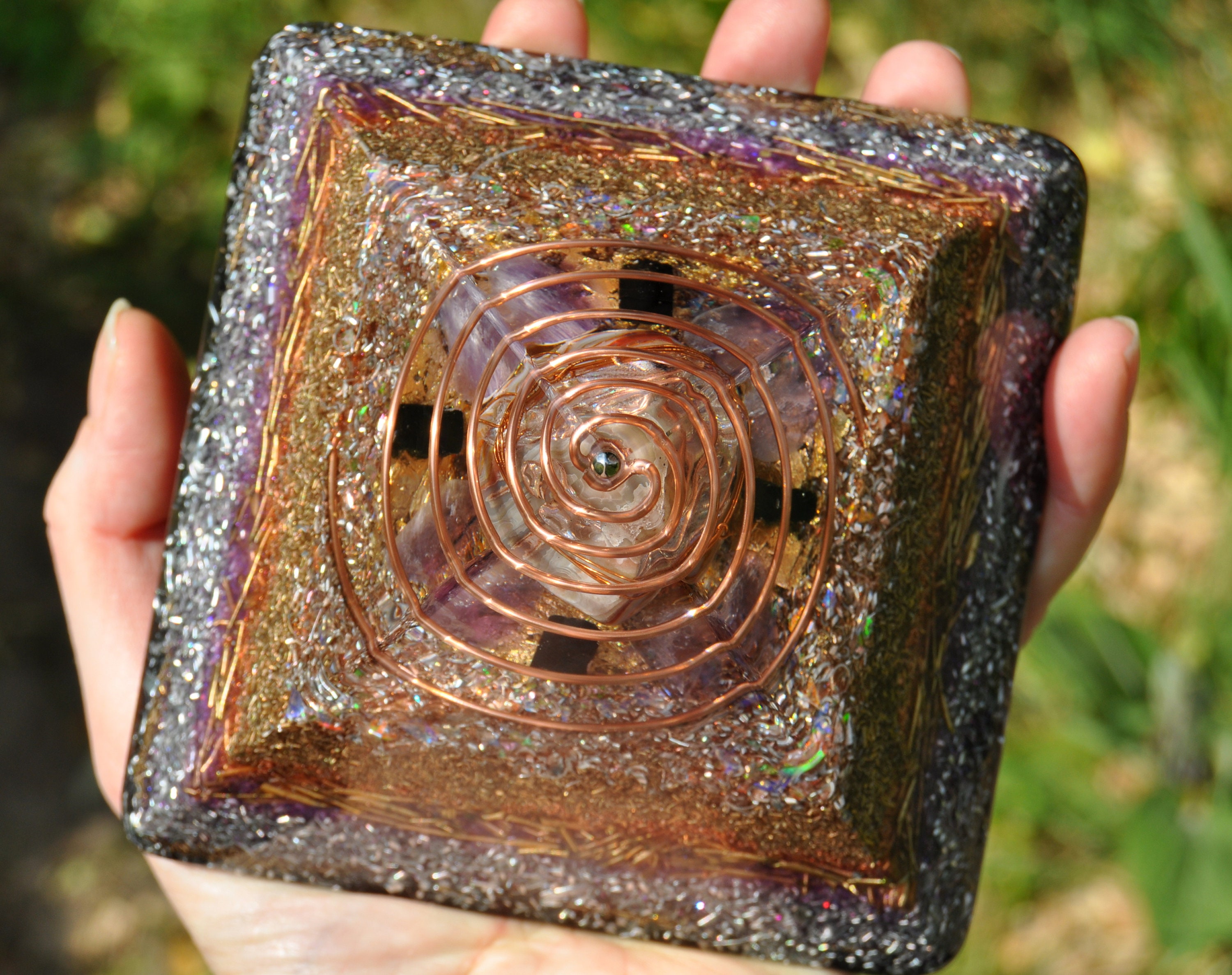 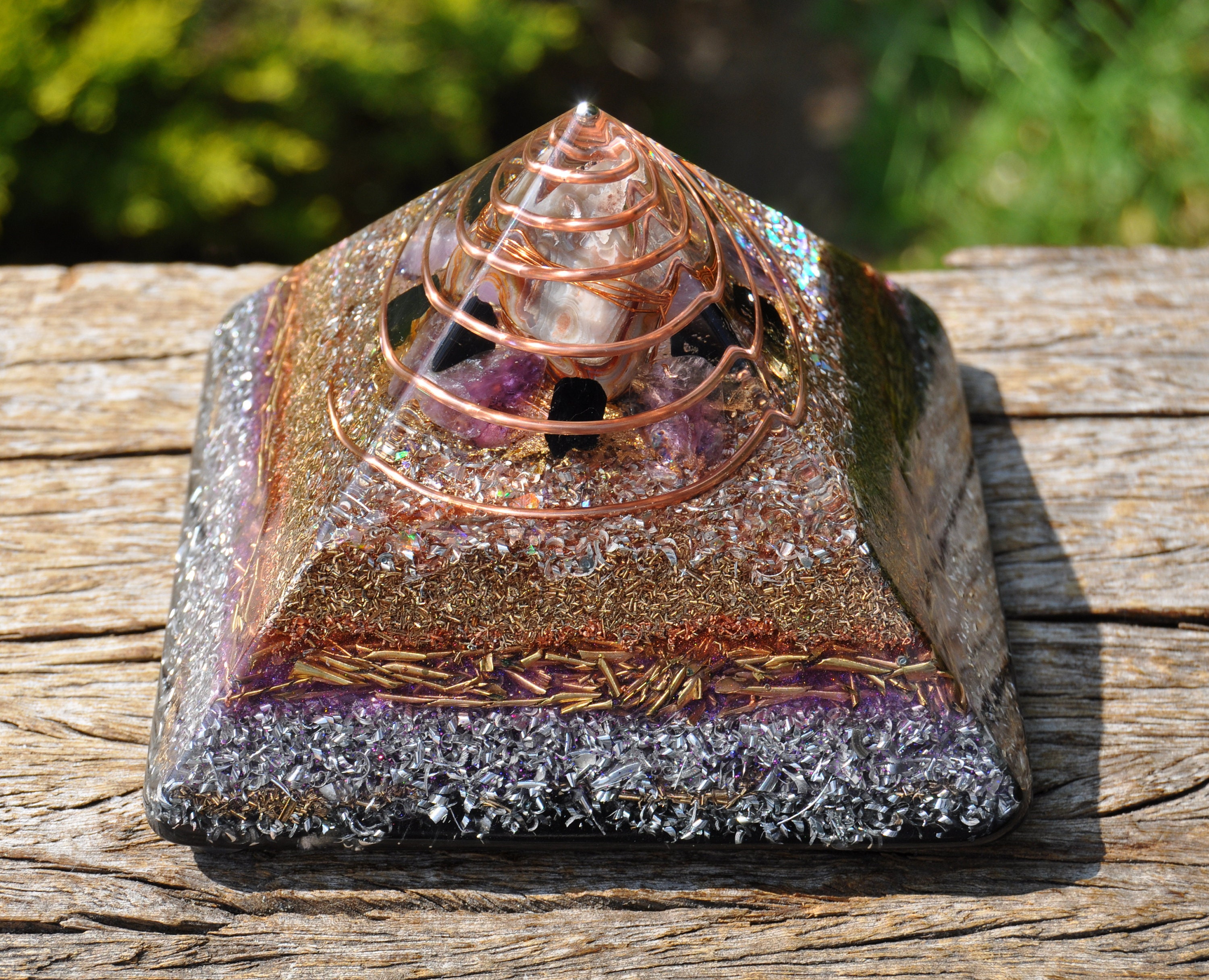 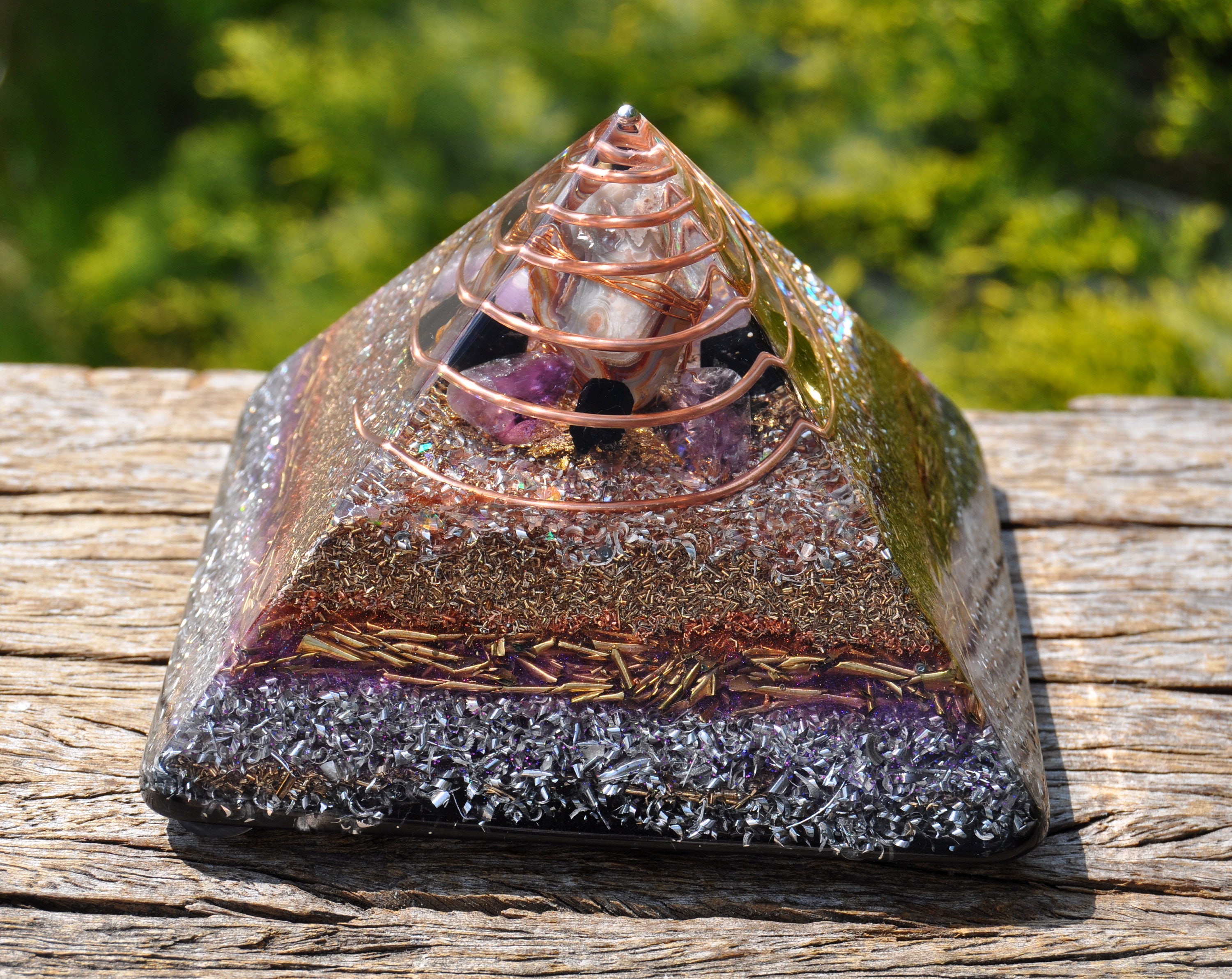 This is a special Orgonite® Giza pyramid that features a Crazy Lace Agate in the top which is entwined with a metal SBB coil which amplifies, moves and directs energy. The coil also considerably increases the power and range of the pyramid. It has one stainless steel ball in the top which makes the energy come out in a rounder wider shape instead of a beam.

In the top you can see raw Amethyst crystals and natural terminated black Tourmaline points.

It also helps one stay focused. Although, generally a protective stone, it has particularly strong emotionally protective properties. It is also said to ward off the “evil eye.” Physically, crazy lace agate is excellent for increasing stamina and energy, and is good for skin disorders such as acne, eczema, etc., is beneficial for the endocrine system and the heart.

White Lace Agate is the color of cleanliness, purity, unity and innocence. The timeless, natural powers of the white rays are those of the moon. It is the color we see when the moon reflects the sun's light to us. It is the color of natural cycles, birth, and regeneration - the feminine gender, manifested as the Goddess in many cultures. Just as the moon is our only illumination in the dark world of night, white talismans are of the spiritual world that is sensed but not seen. They are the guides to understanding and knowledge we don't even know exists.

The silver grey patterned layers within Crazy Lace Agate embody the silver ray of reflection and the path to inner consciousness. Much like pure white, lighter gray is the color of the moon, the feminine, the cool stillness of night, magic and ambiguity. It is lonely, altruistic, and aloof. It is a mystery. As Seekers, gray objects find patterns and the inner meanings of events. Use light gray talismans for quiet meditation, finding your real purpose in life, and for calm reflection on life's meanings.

Weight is 672 grams / 23.7 ounces. It has the same proportions as the Original Giza Pyramid in Cheops Egypt.