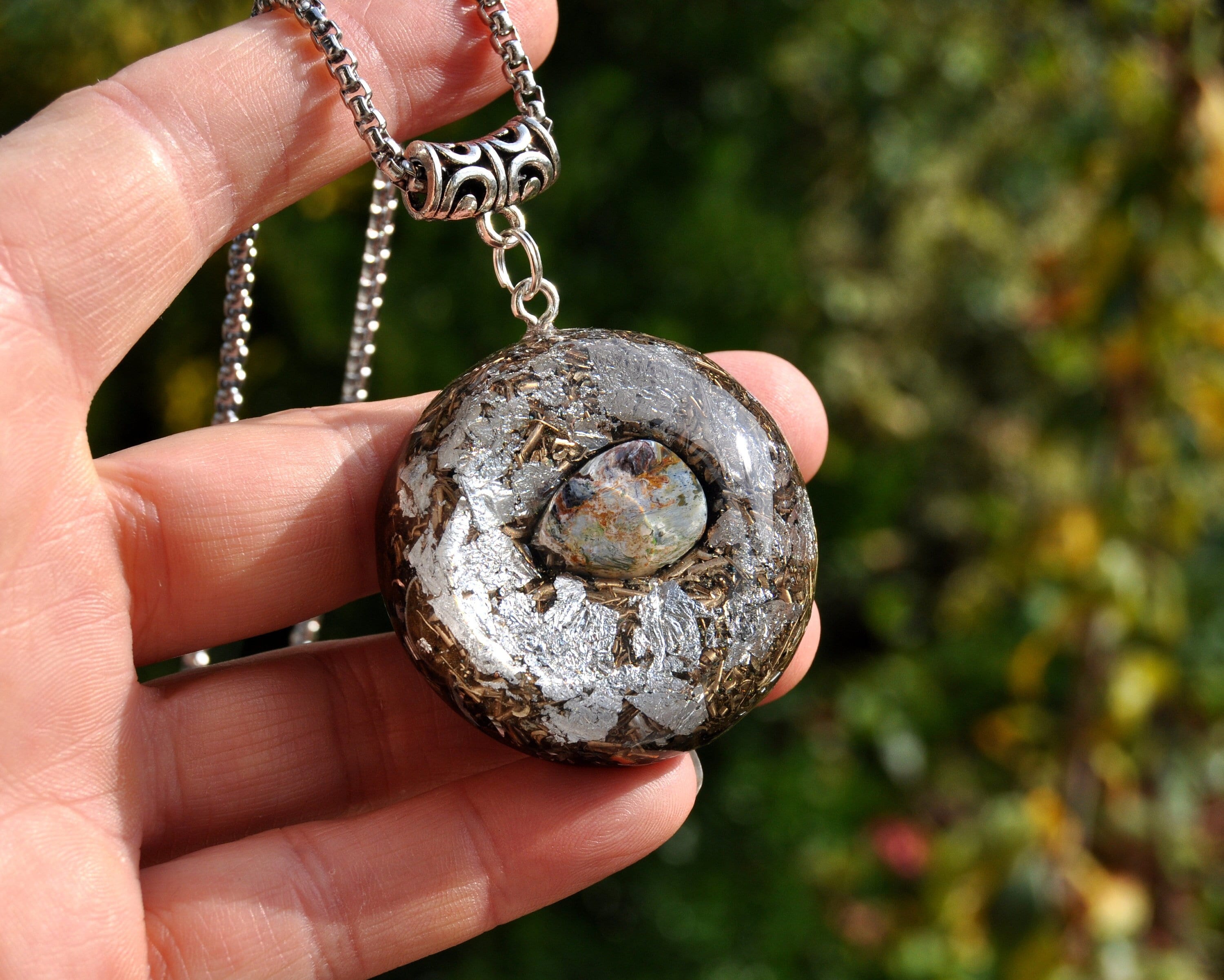 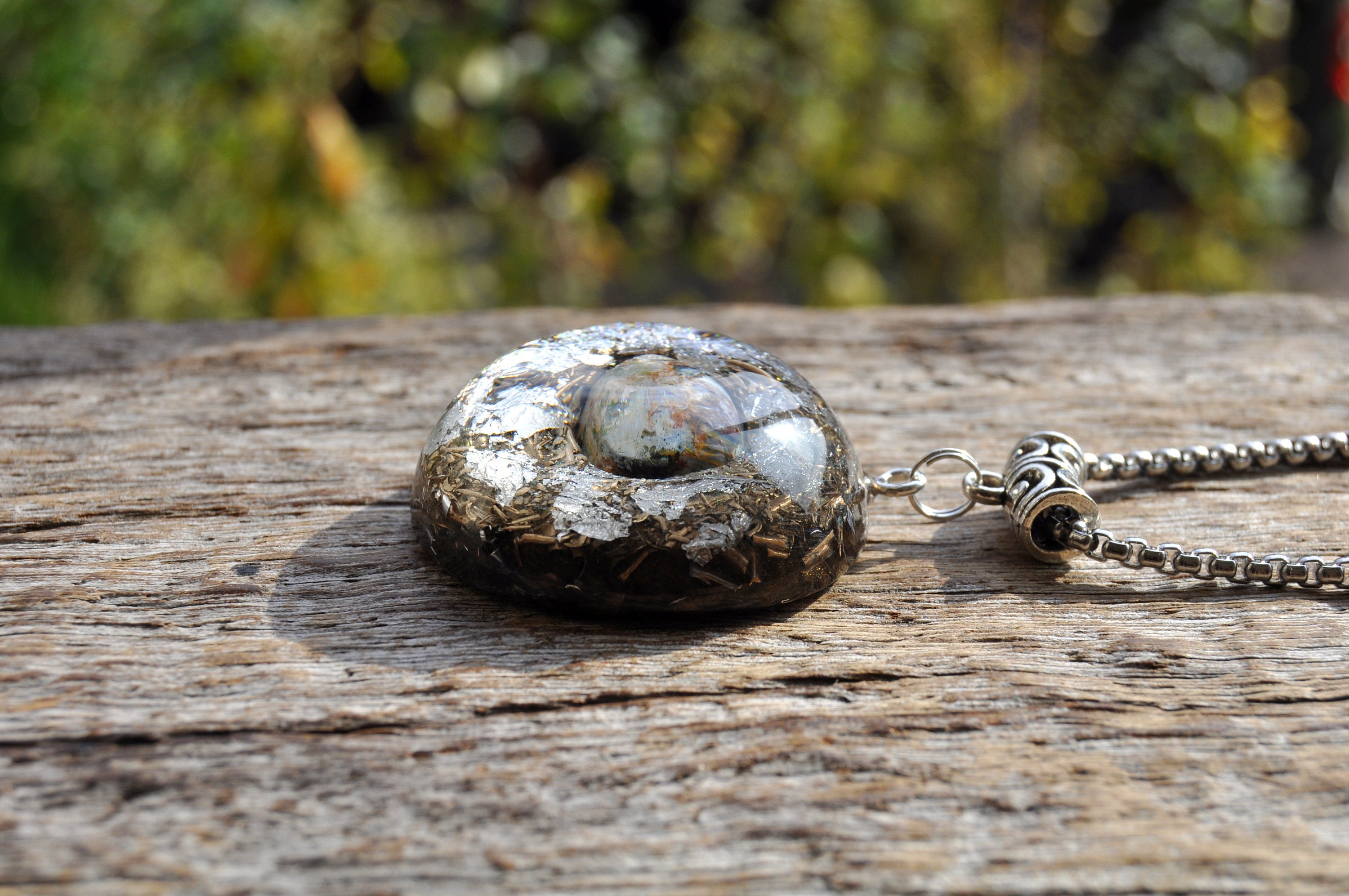 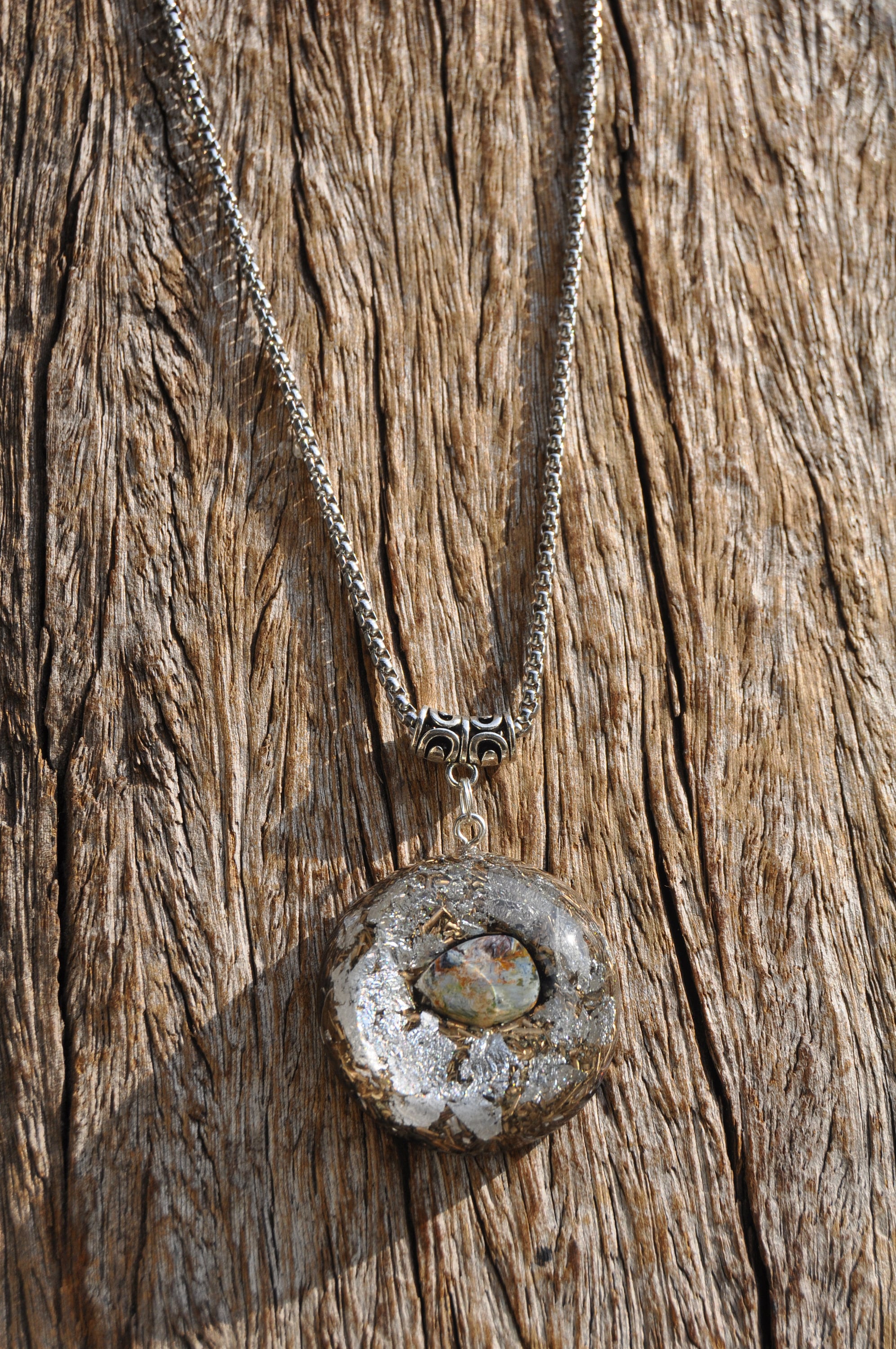 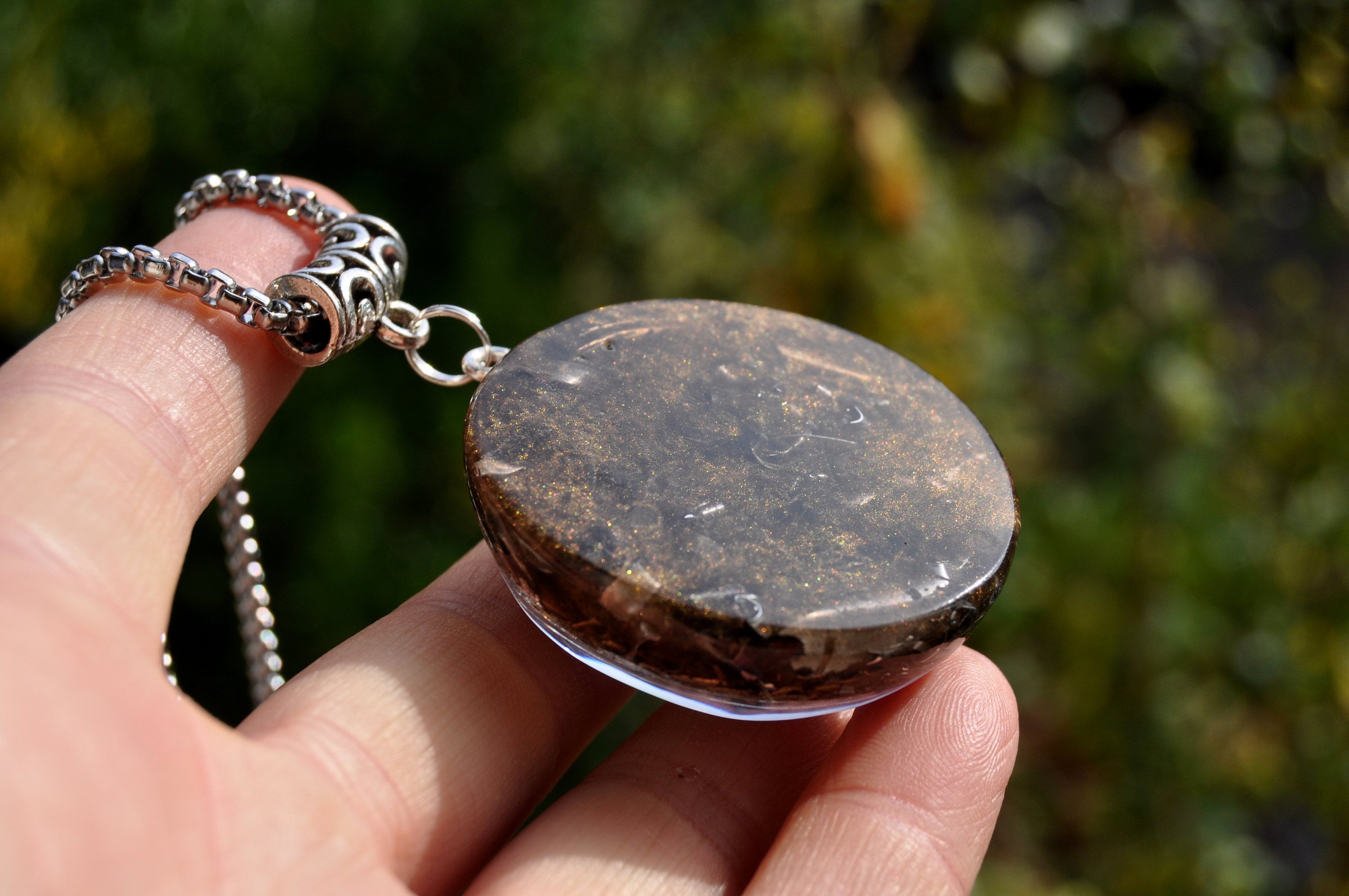 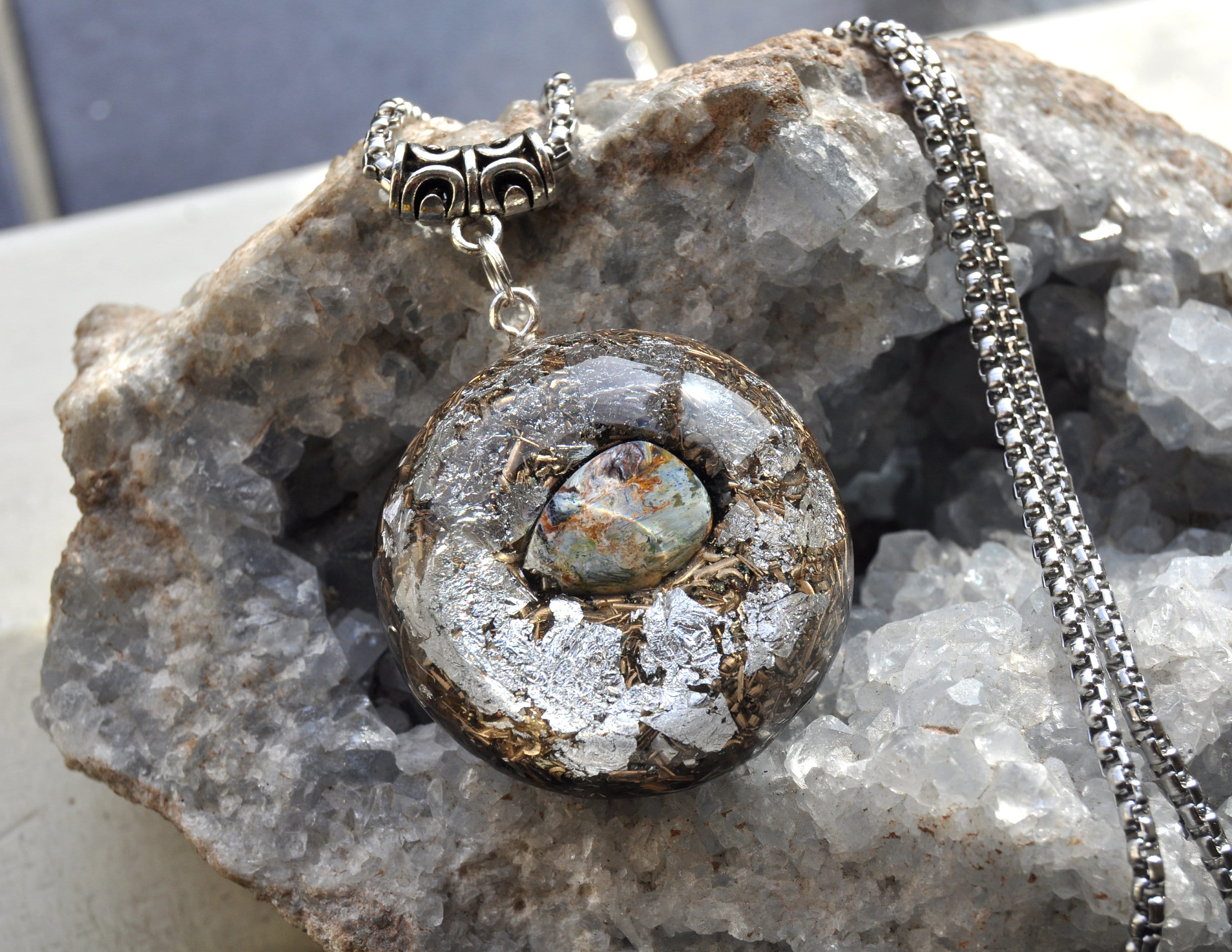 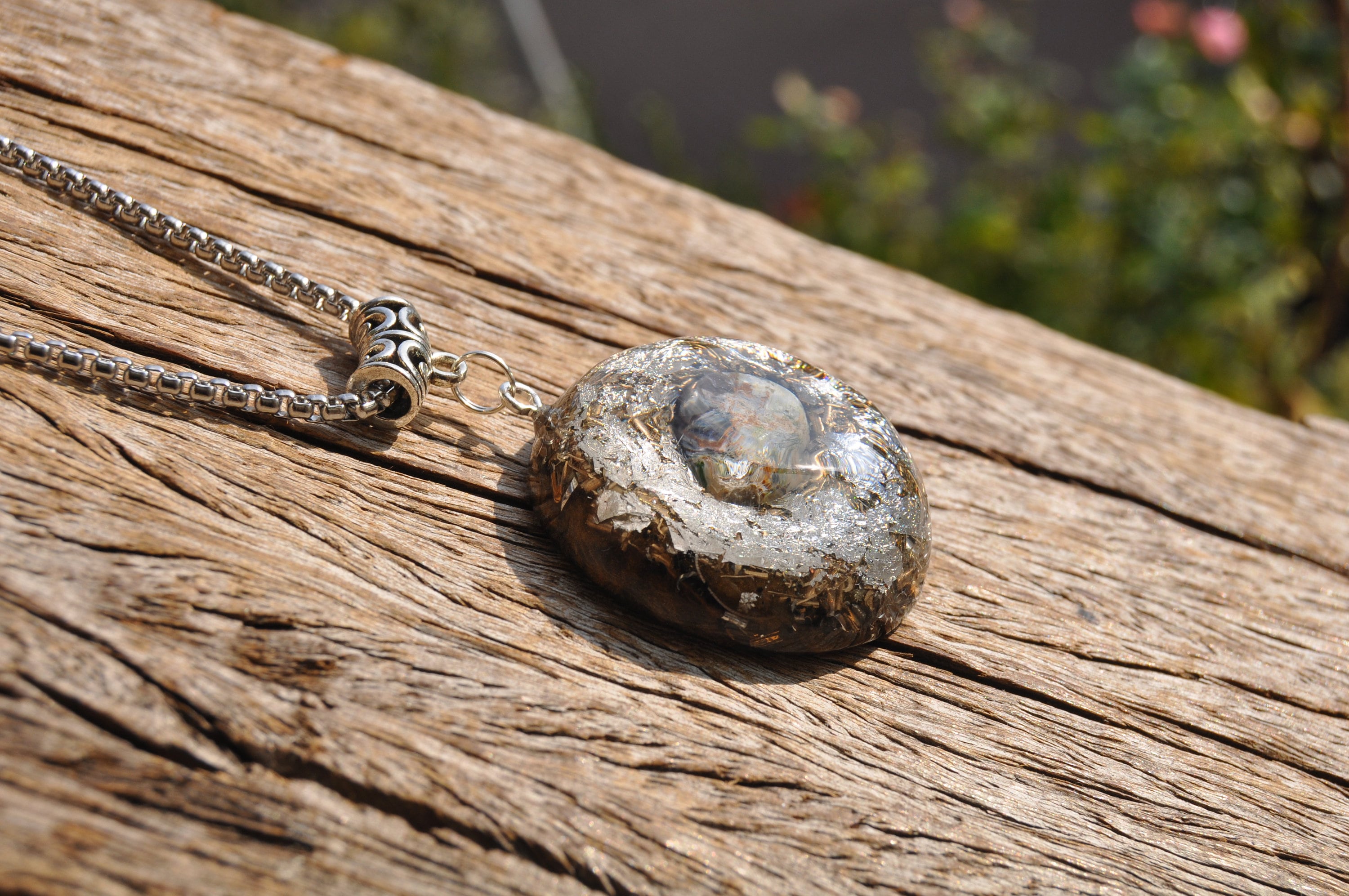 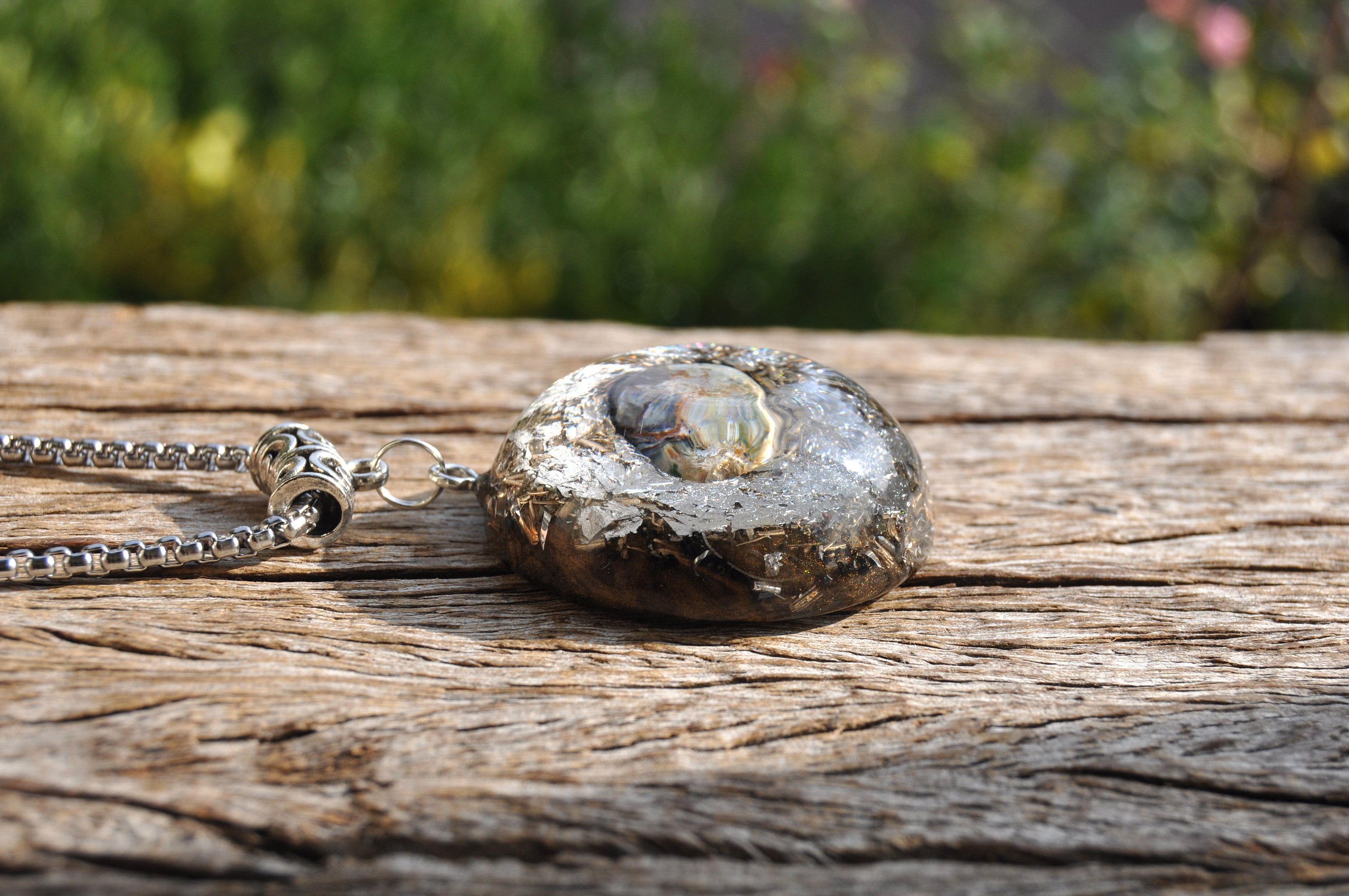 The main stone of this orgonite is a lovely 6.9 Carat Pietersite (in the front) which surrounded with 925 Sterling Silver flakes. It furthermore consists of Rose Quartz (self - love), black Tourmaline (to protect and ground excess energy) , Elite Shungite (EMF protection), Selenite (cleans and charges the other crystals), Pyrite clusters (to enhance and deflect ELF waves), Rhodizite (to amplify the other crystals) and clear quartz (for piezo-electric effect) all within a durable resin setting.

Pietersite is a variety of Quartz, composed naturally of Tiger's Eye, Hawk's Eye and Jasper, and is characterized by an incredible chatoyancy and brilliance of life within the stone. Its dominant gold hues are contrasted with deep blue-black, grey and brown, as well as occasional clear areas. It was a recent discovery by Sid Pieters in Windhoek, Namibia, and is currently increasing in value.

The beauty and essence of Storm is captured in Pietersite, with brilliant flashes of golden light amid churning clouds of deepest blue. Known as the Tempest Stone, its highly charged energy is almost tangible. Just as lightning clears the air and makes all things new, Pietersite discharges negative energies and emotional turmoil, and cleanses the aura, restoring it to calm.

Pietersite also provides a unified activation of the Sacral and Solar Plexus Chakras, as well as the Third Eye, creating a powerful increase in the energy of personal will and intuitive abilities. It grounds the body's physical energy centers, not to the earth, but to etheric realms. This rare ability increases the focus of one's aim in life, enhances meditation, visionary and telepathic powers, and allows spiritual journeying and access to the Akashic Records.

Pietersite is a powerful protection stone, especially against the elements. It calms nervous people and animals during storms, protects when driving in bad weather, and guards homes and businesses against storm damage. It also acts as a shield against the adverse effects of technology, particularly if you work long hours with a computer or live near a mobile phone mast.

For those who have tried and failed many times to beat an addiction, Pietersite is an extremely supportive and strengthening stone. It explores causative influences, increases the resolve and lends willpower in following a curative program.

Pietersite also boosts self-esteem when worn consistently. It is especially empowering for creative people who lack confidence in their abilities, and as a result do not earn money from their gifts.