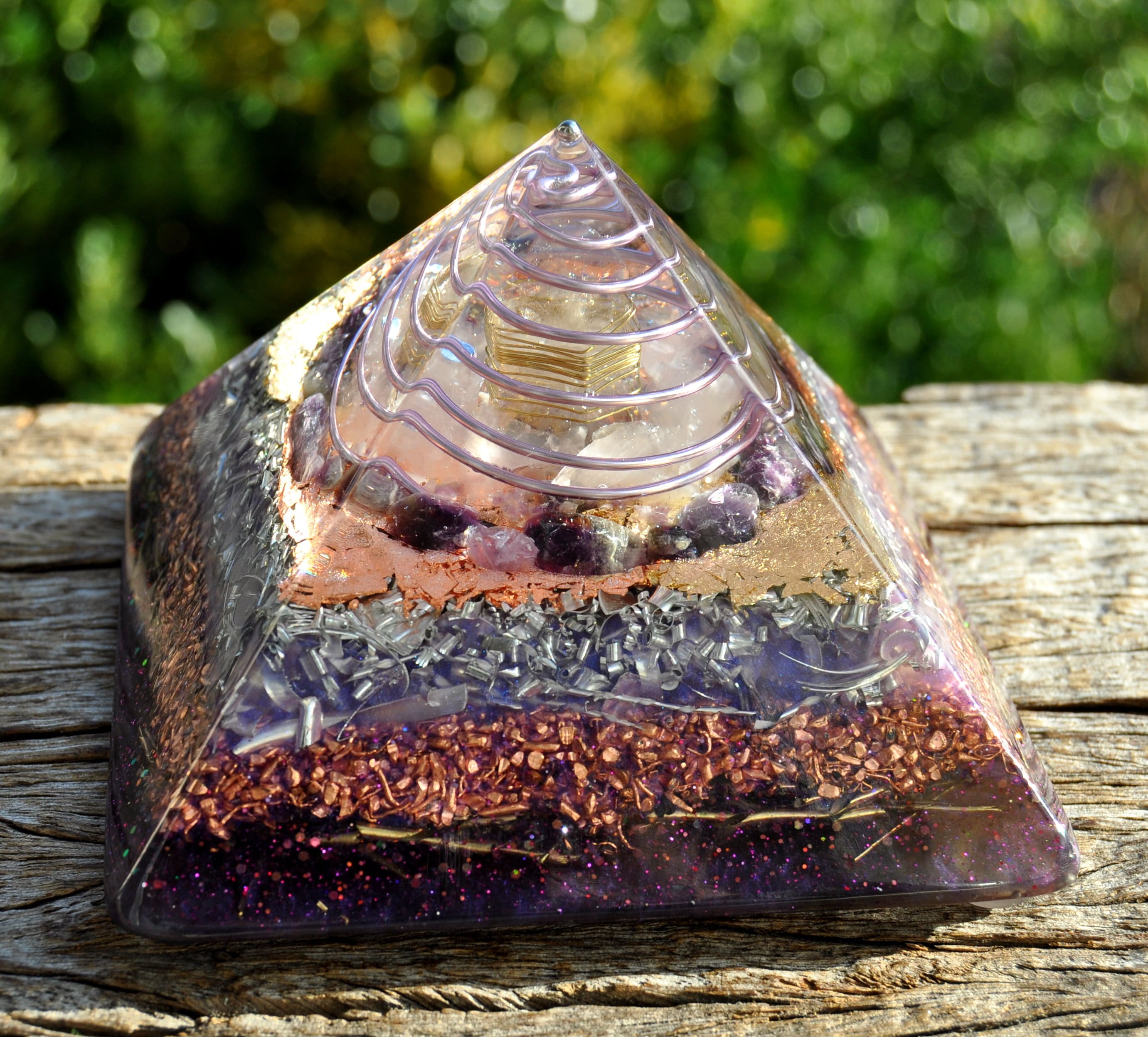 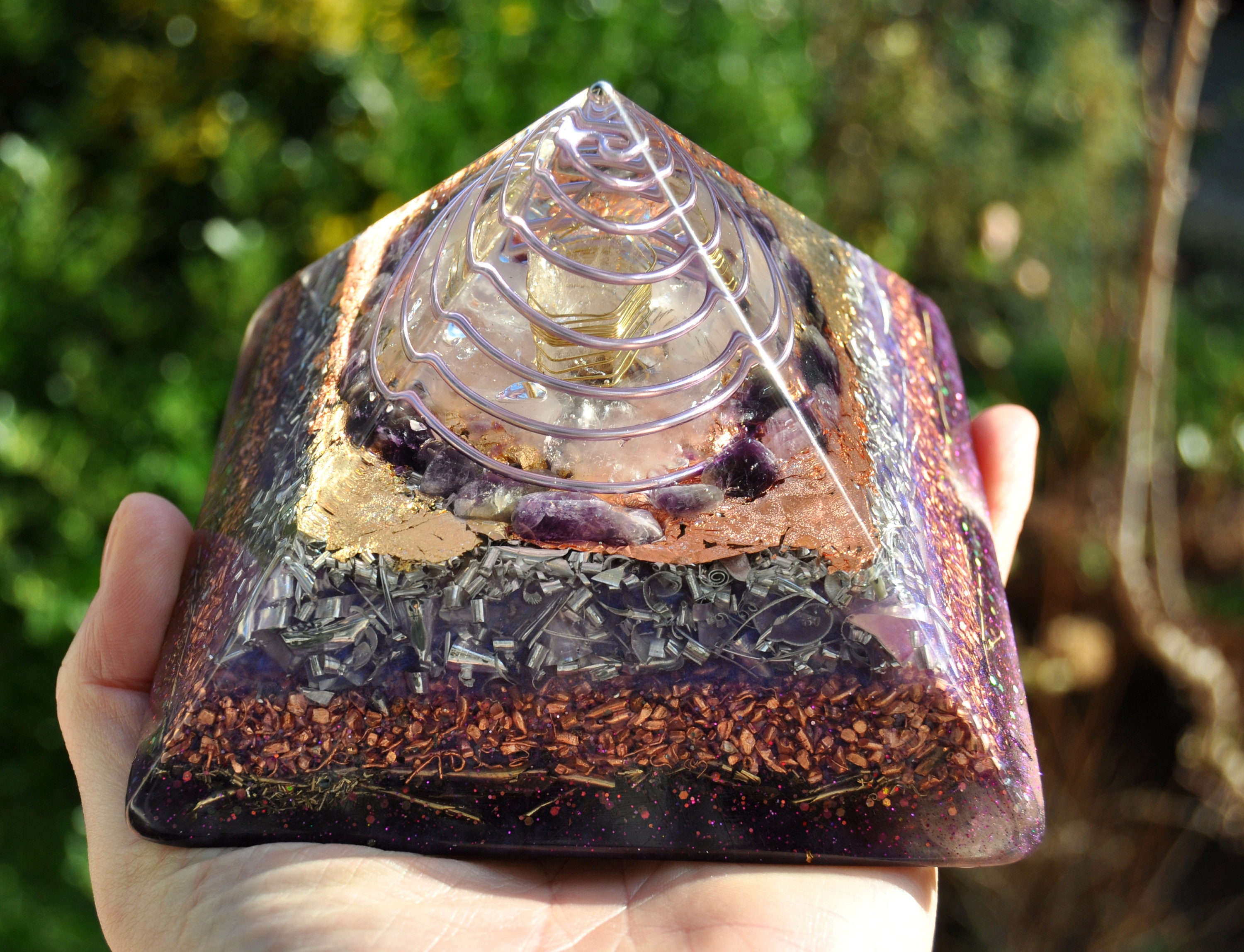 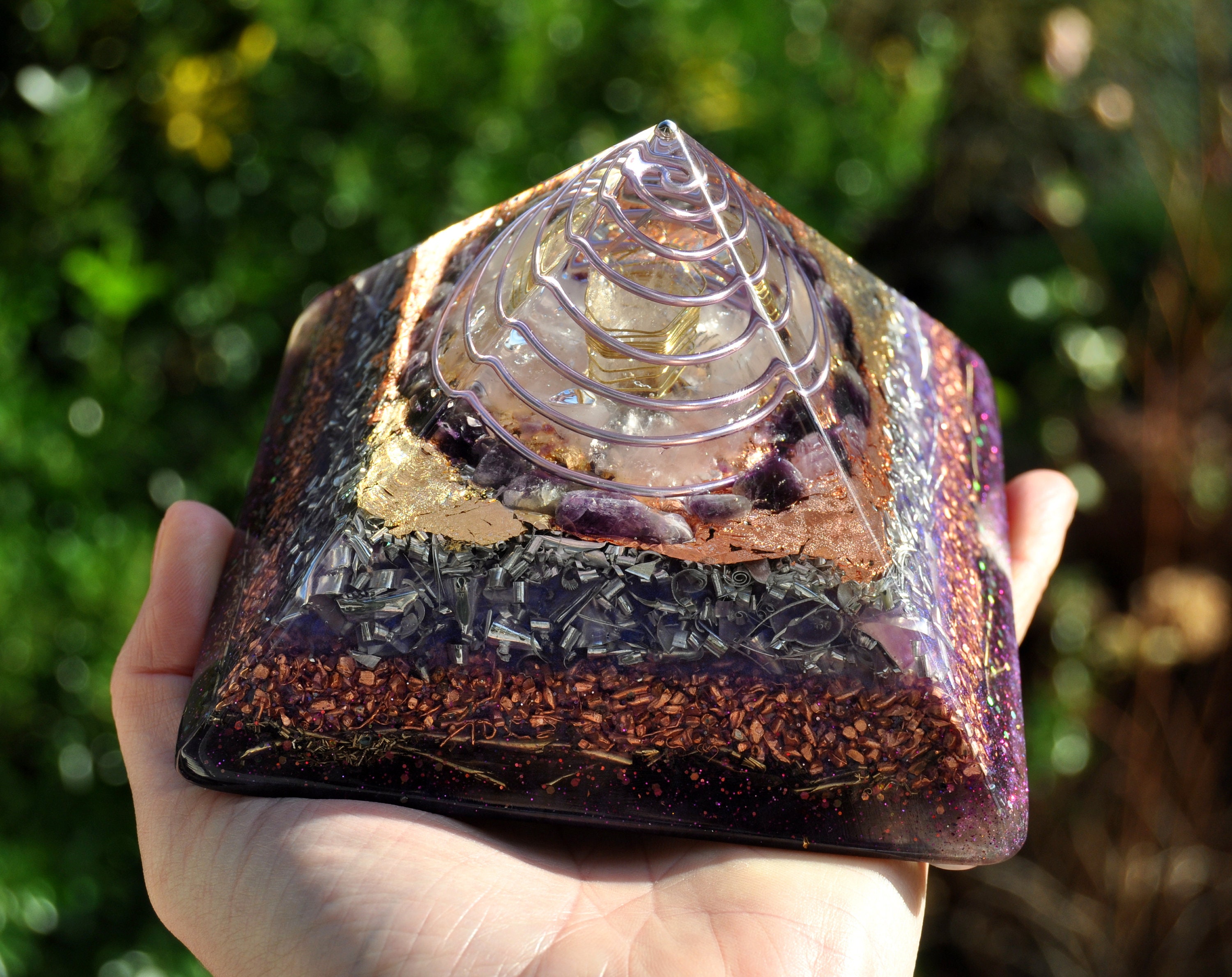 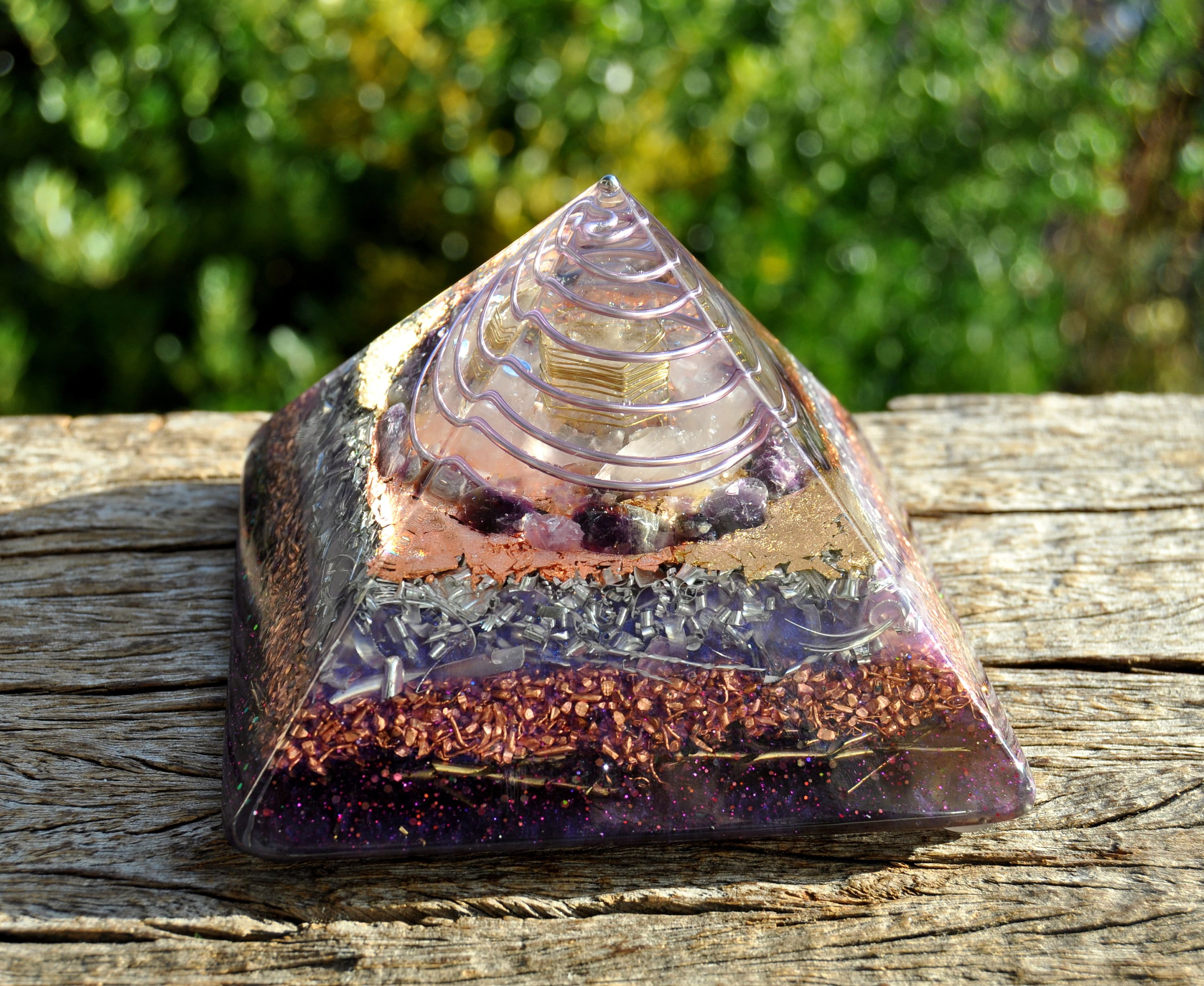 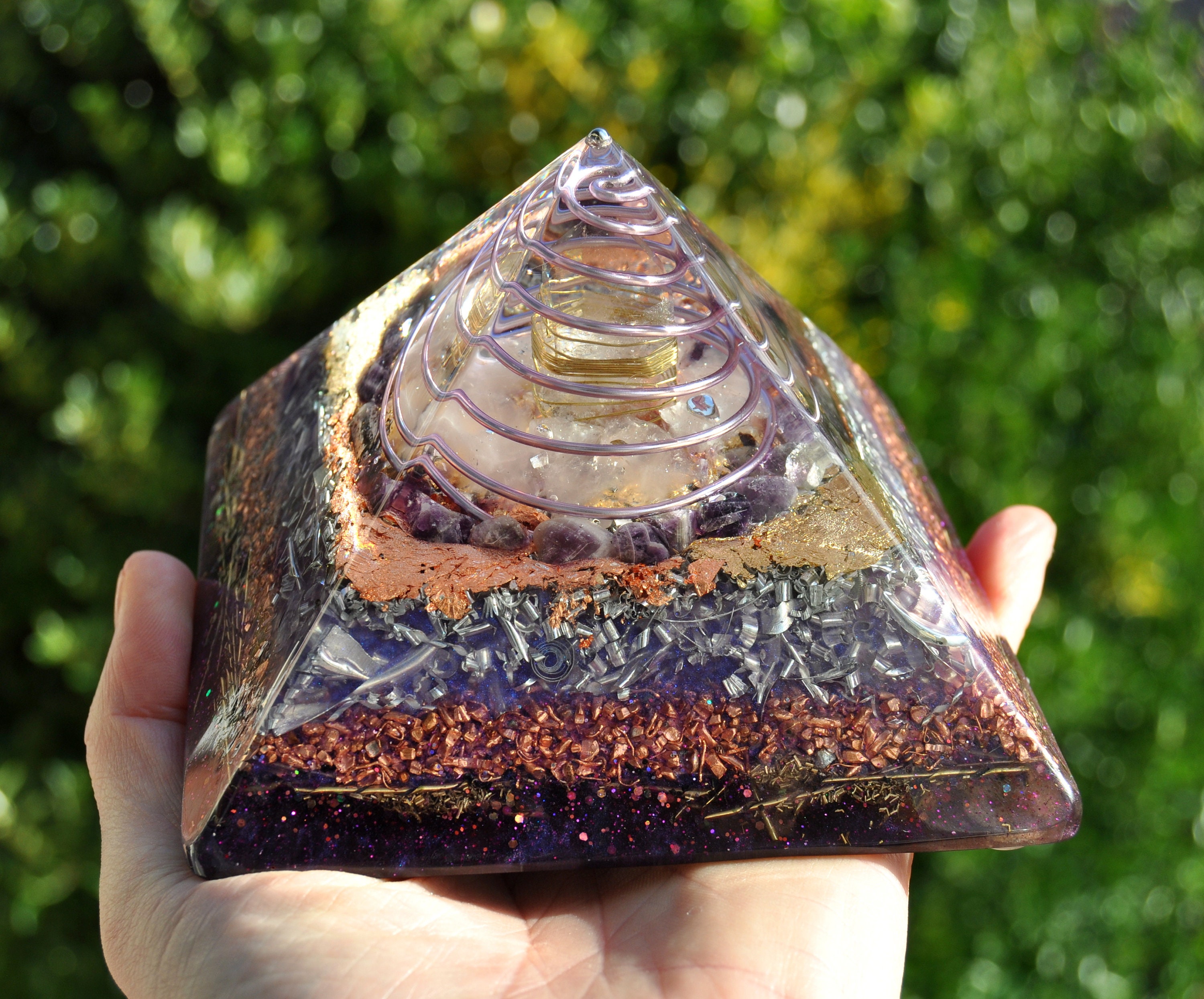 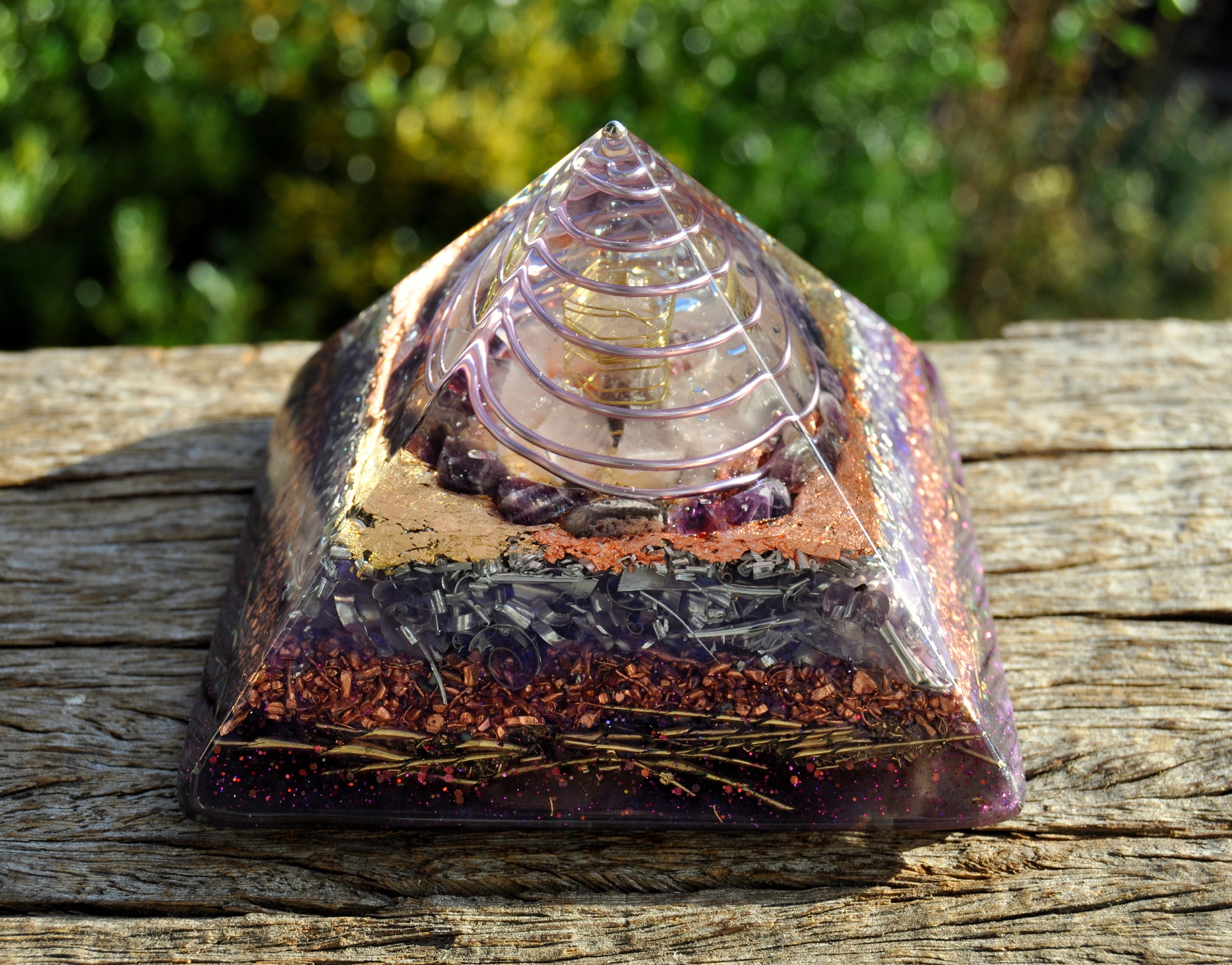 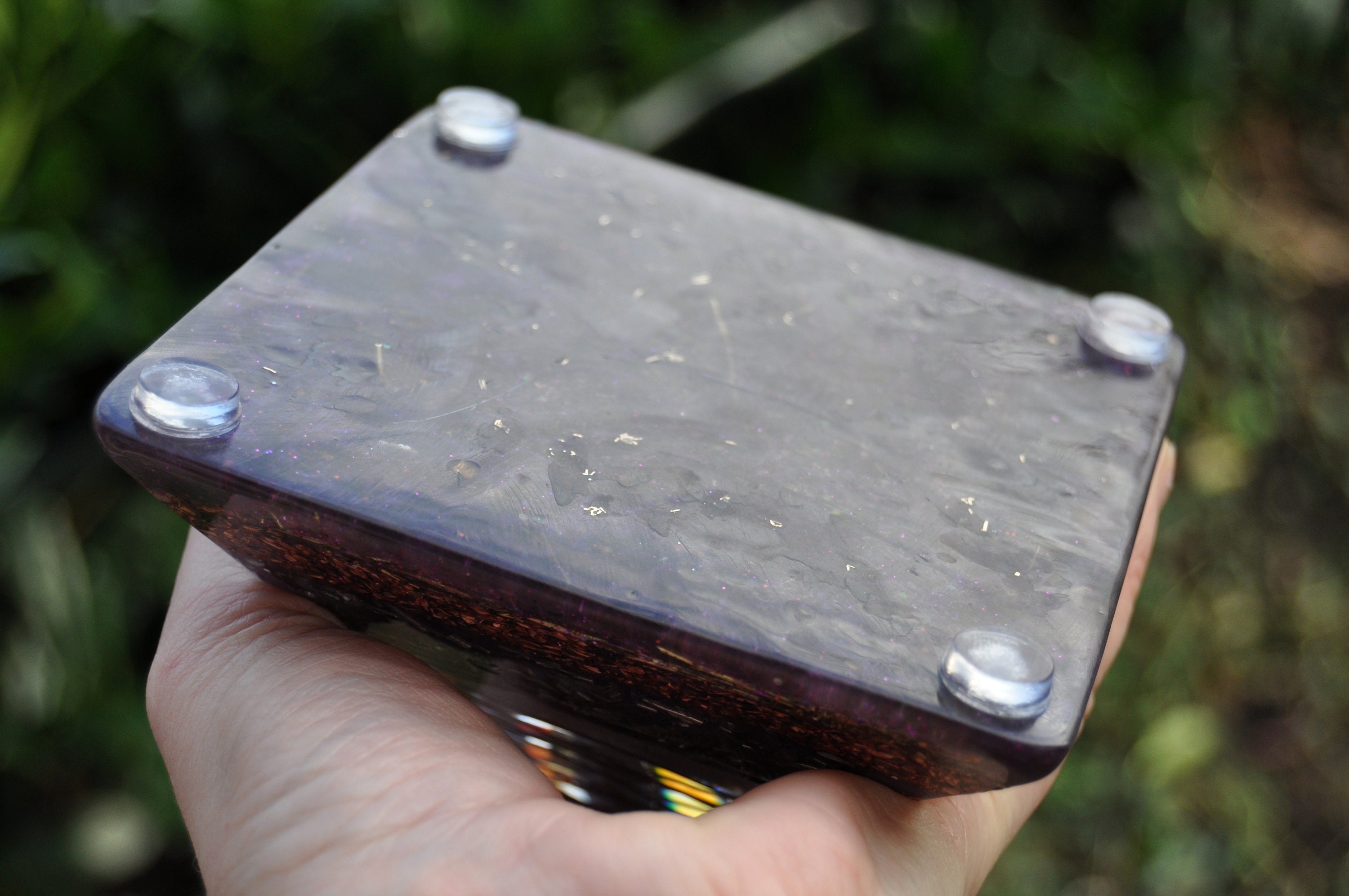 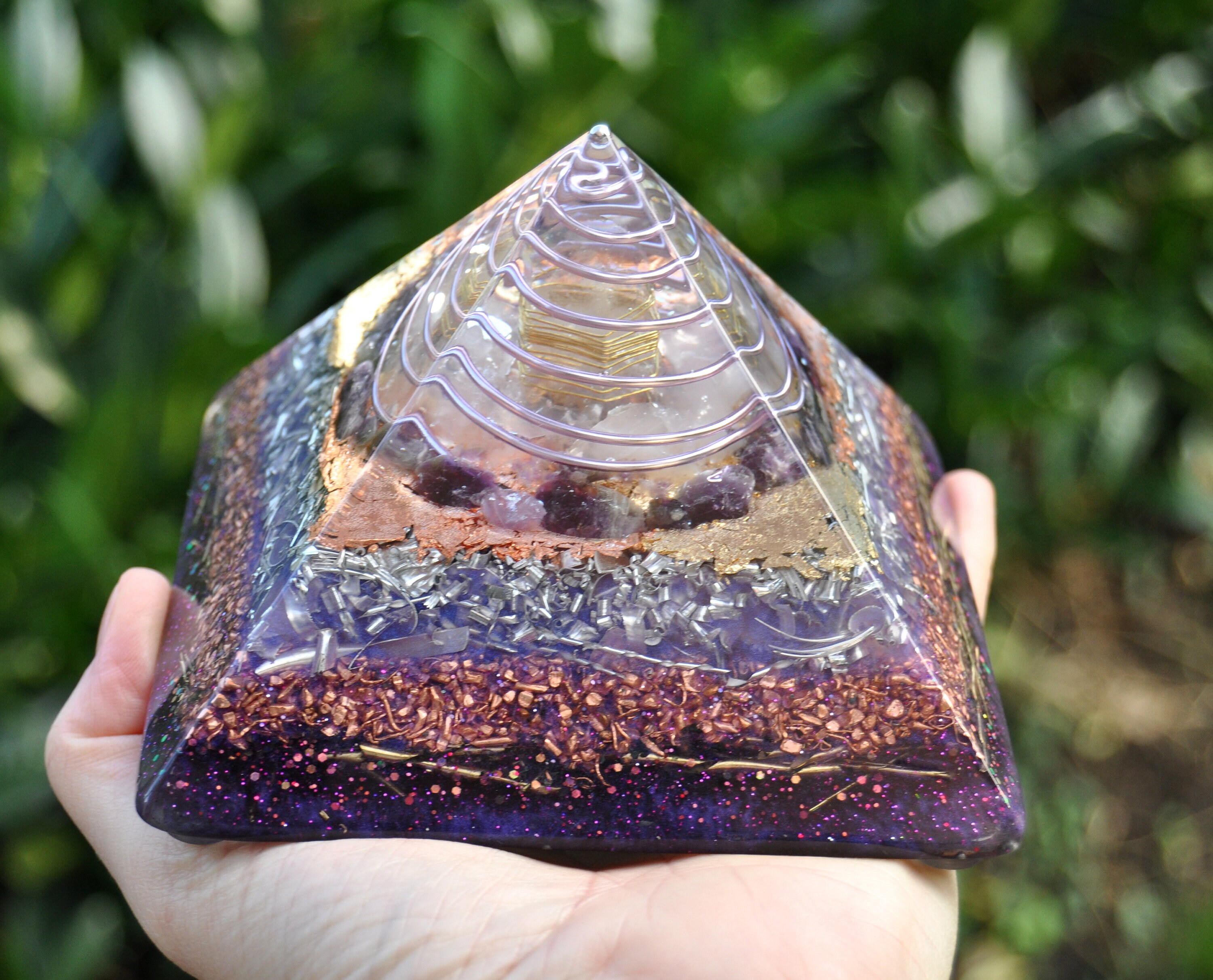 This is a special Orgonite® Giza pyramid that features the Golden Triangle stones which are Amethyst, Rose Quartz and clear Quartz. It has a natural terminated clear quartz crystal in the middle which is entwined with a etal SBB coil which amplifies, moves and directs energy. The coil also considerably increases the power and range of the pyramid. It has one stainless steel ball in the top which makes the energy come out in a rounder wider shape instead of a beam.

In the top you can see raw Amethyst crystals, Rose Quartz and clear Quartz crystals surrounded by Copper and Gold leaf Gold.

It consists of the following main stones 👉
✨ THE GOLDEN TRIANGLE ✨

Rock crystal 'Stone of Light'. Rock crystal cleans, purifies and strengthens. It is arguably the most important stone in gemstone therapy. Rock crystal strengthens the self-healing capacity. It also enhances the effect of other stones.
He dissolves energetic blockages in the chakras. It optimizes the energy flow.
Meditating with rock crystal helps to develop your intuition and third eye. It purifies your aura and makes it more powerful. Rock crystal brings balance between body and mind.
A great stone to meditate with, to wear or to energetically cleanse a space. Rock crystal gives energy and can give you clear insights. He belongs to the heart chakra and makes loving and pure.

Rose Quartz 'Loving and Soft'. Love for ourselves and for others becomes easier to feel and give by rose quartz. He opens your heart chakra and that opens you to beauty, love and increases your empathy.
He teaches you to love yourself again if you may have lost it after, for example, a traumatic experience such as mental or physical abuse. Rose quartz also helps against fears and phobias. Calms and comforts you.
For creatives, rose quartz is a very nice stone to have with you. He will inspire and help you to create new things out of love.


Amethyst 'Balance and Spiritual Peace'. Amethyst gives peace, depth and harmony in the house if you put a beautiful stone in the living room. It will neutralize negative tensions and energies and keep your living space energetically clean. Amethyst belongs to the seventh chakra. The color gives clarity of mind and is relaxing in general.
He stimulates and helps you in your spiritual growth and develops your intuition. Helps you find the silence within yourself.
Amethyst reduces nervousness and stress and helps improve concentration. Encourages self-control. Calms strong emotions and brings stability.

Weight is 792 grams / 27.93 ounces. It has the same proportions as the Original Giza Pyramid in Cheops Egypt.