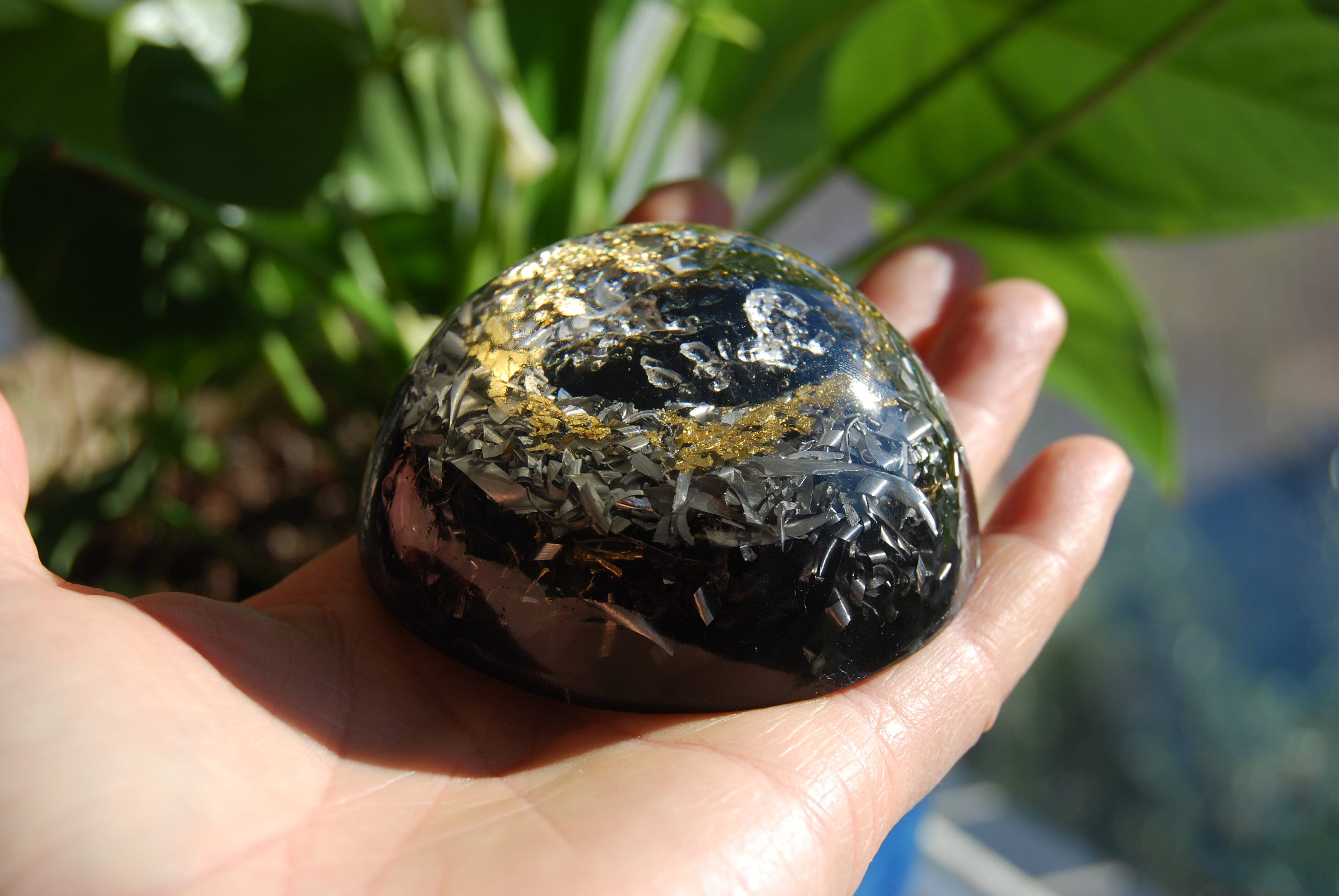 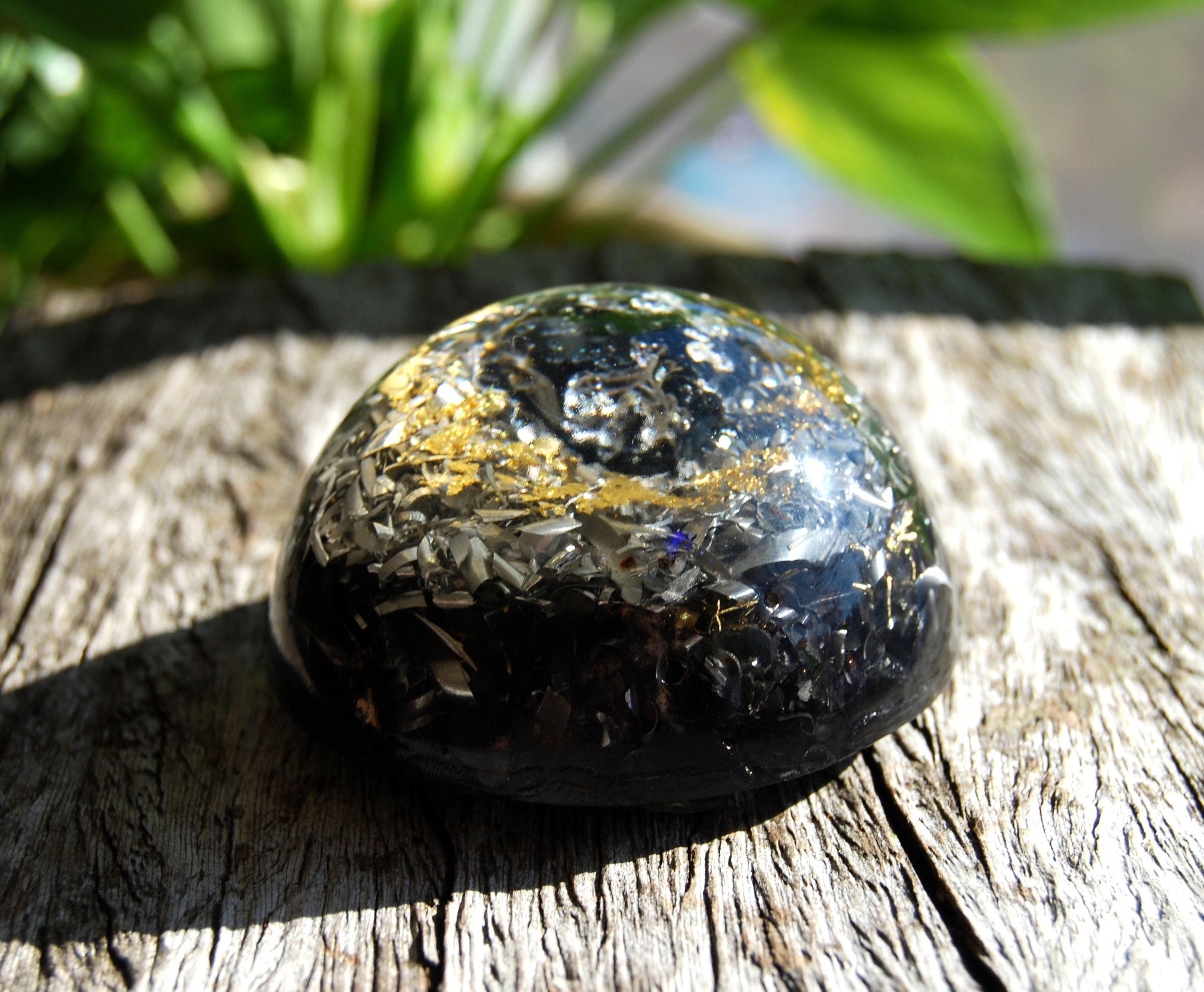 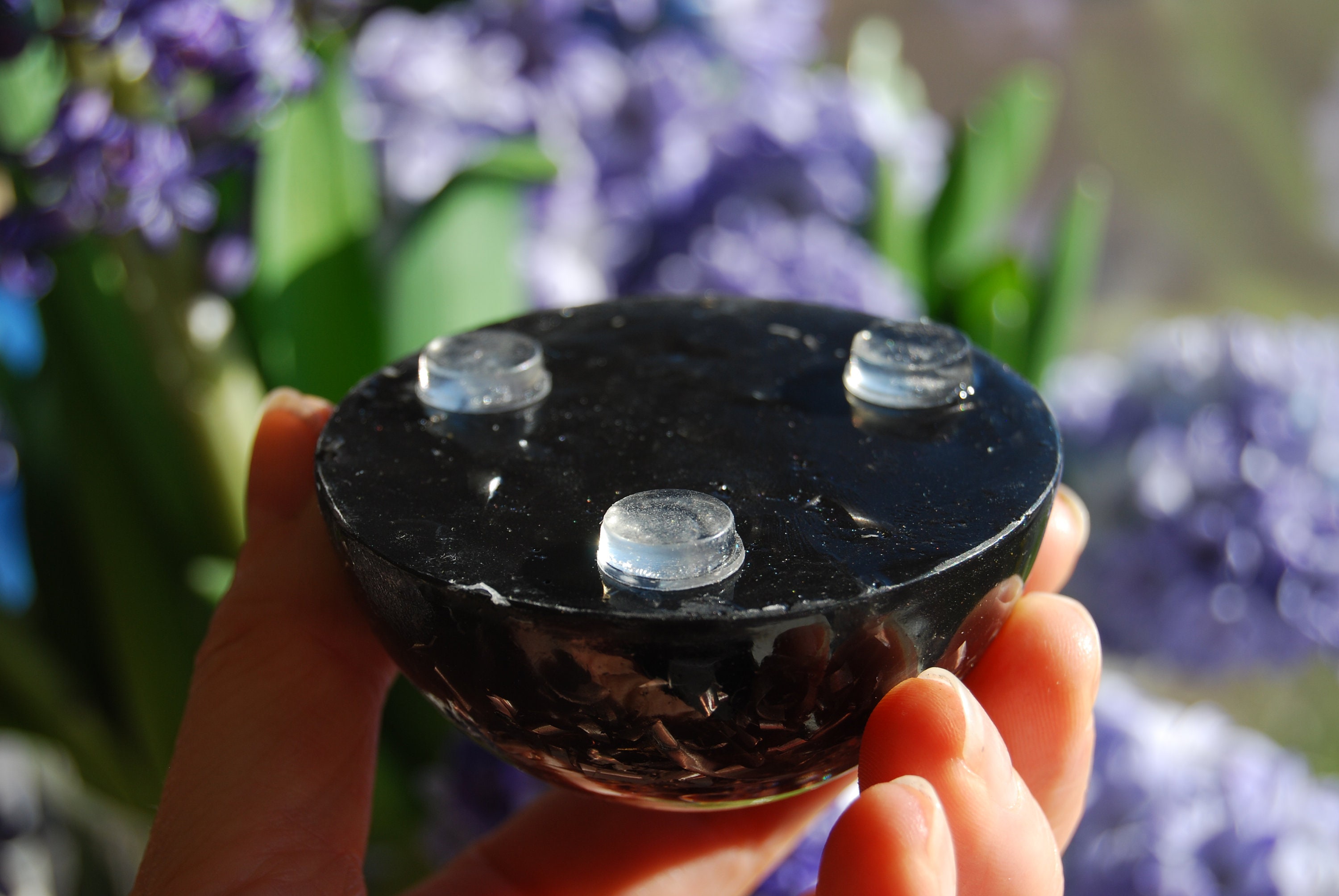 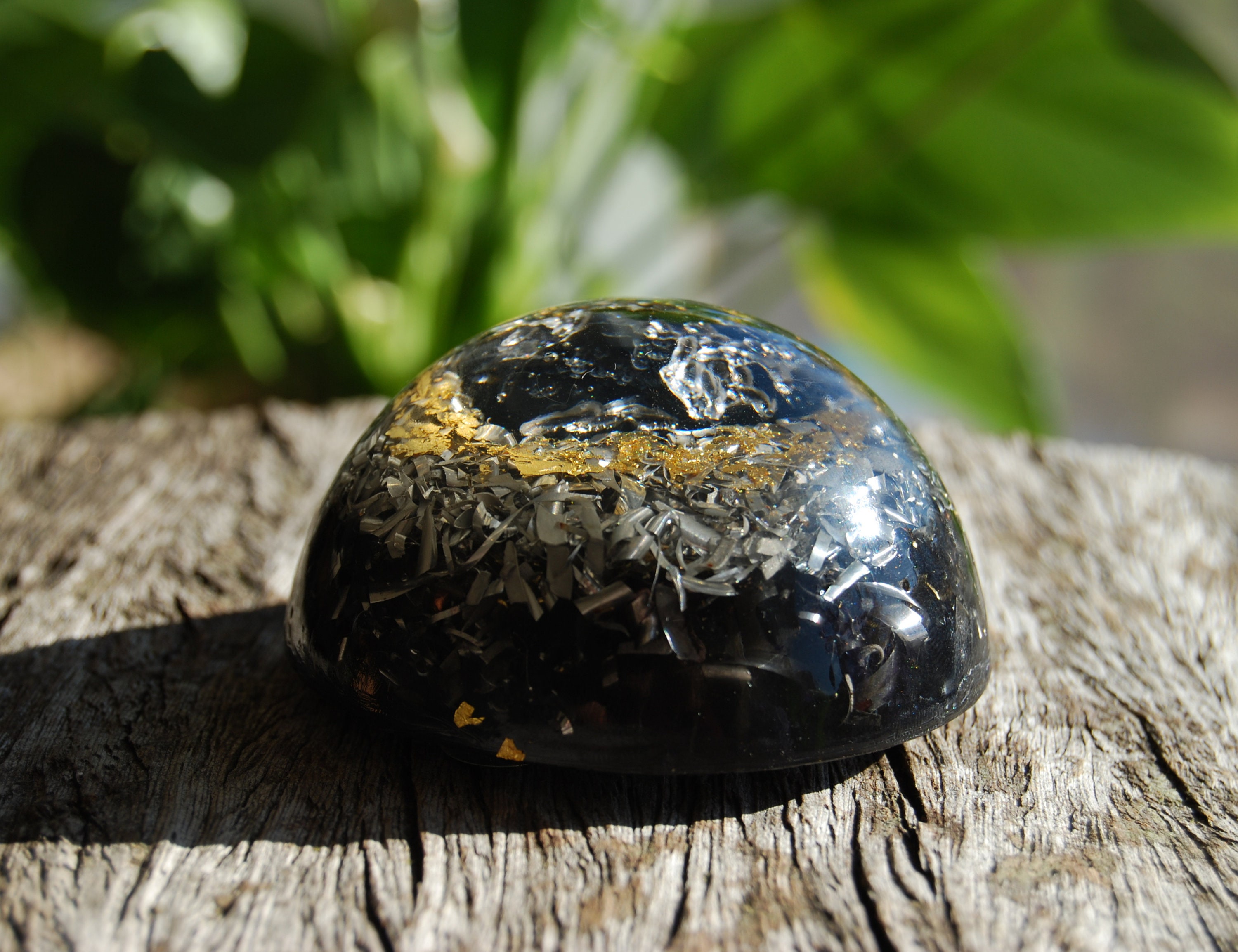 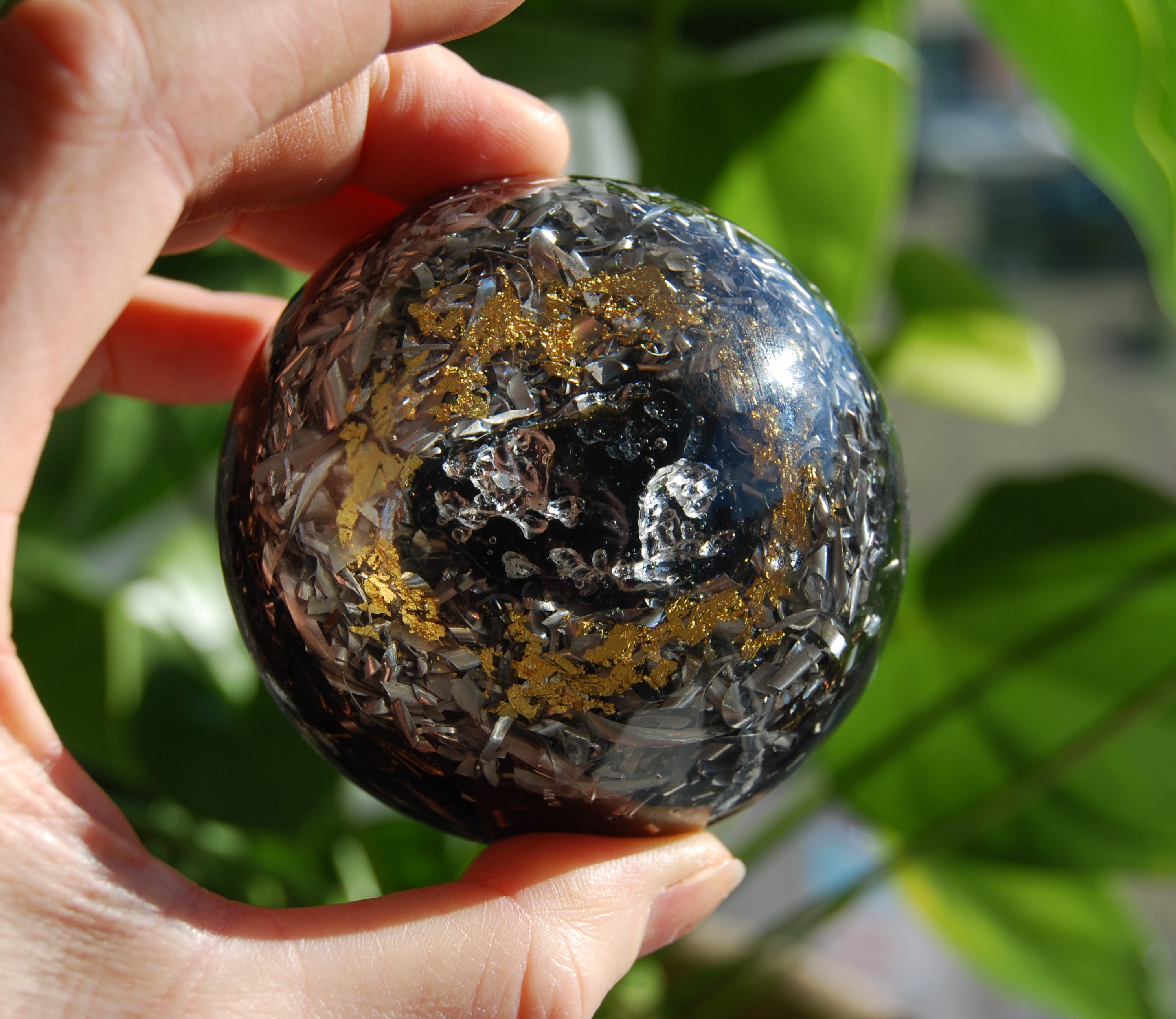 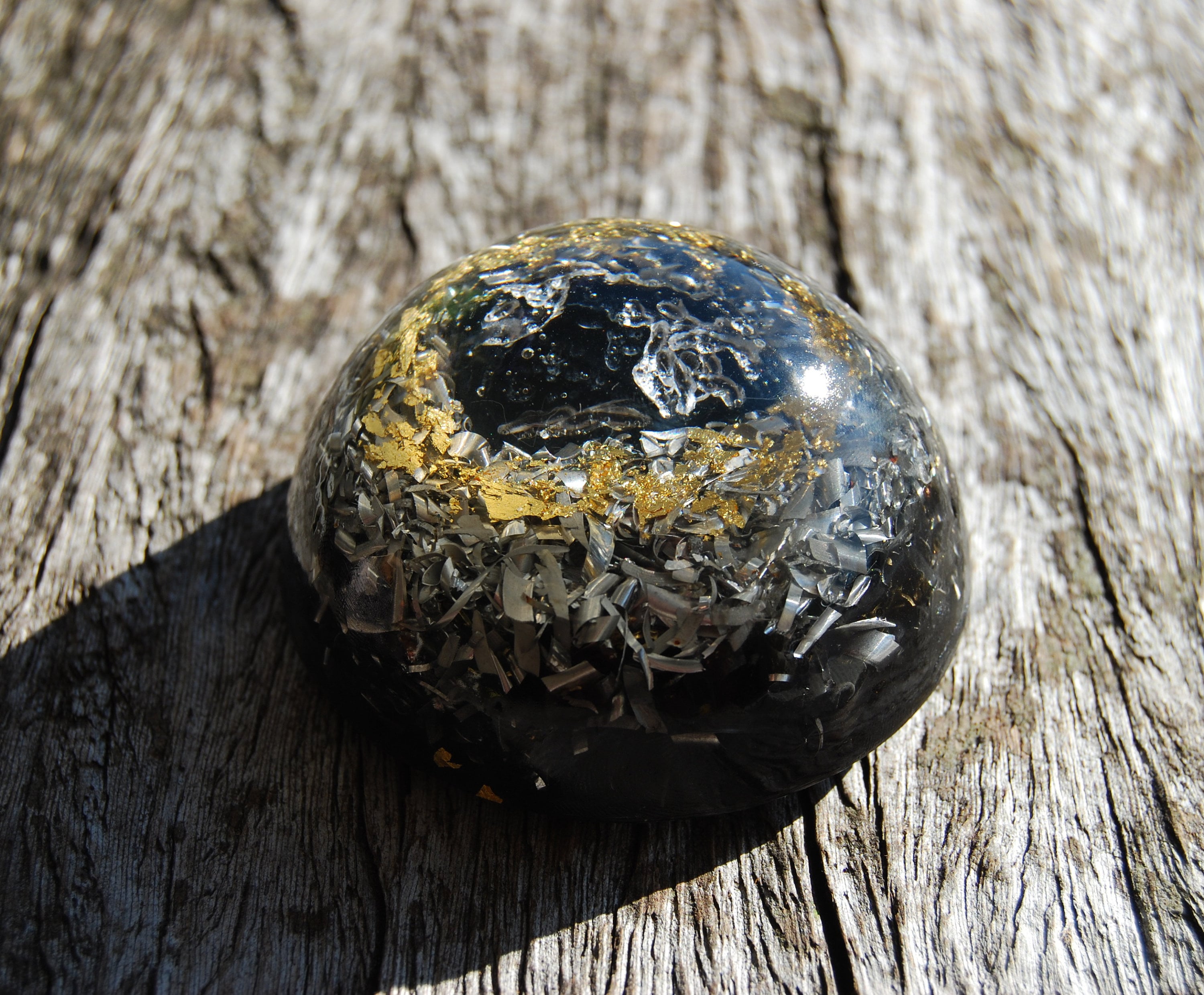 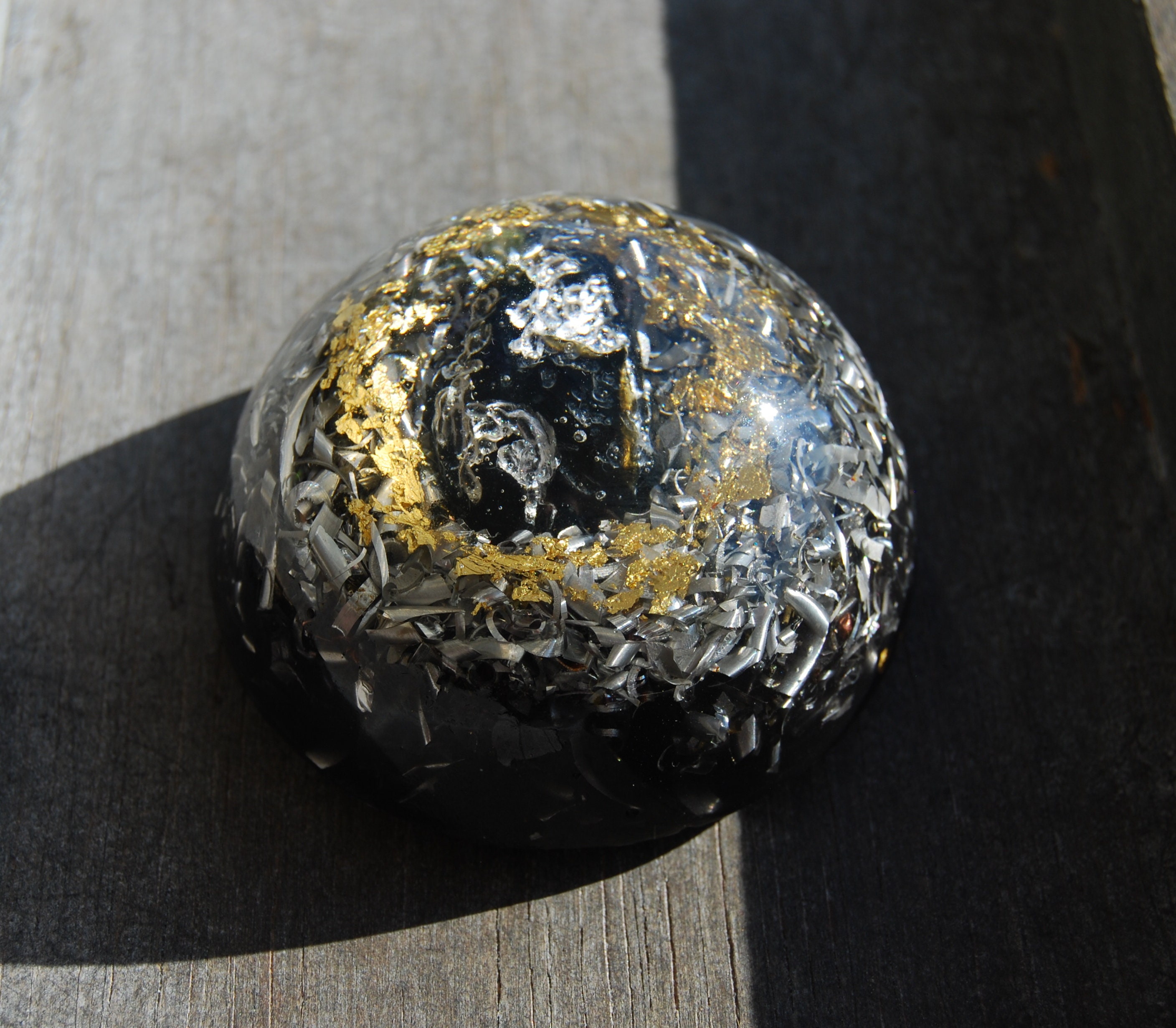 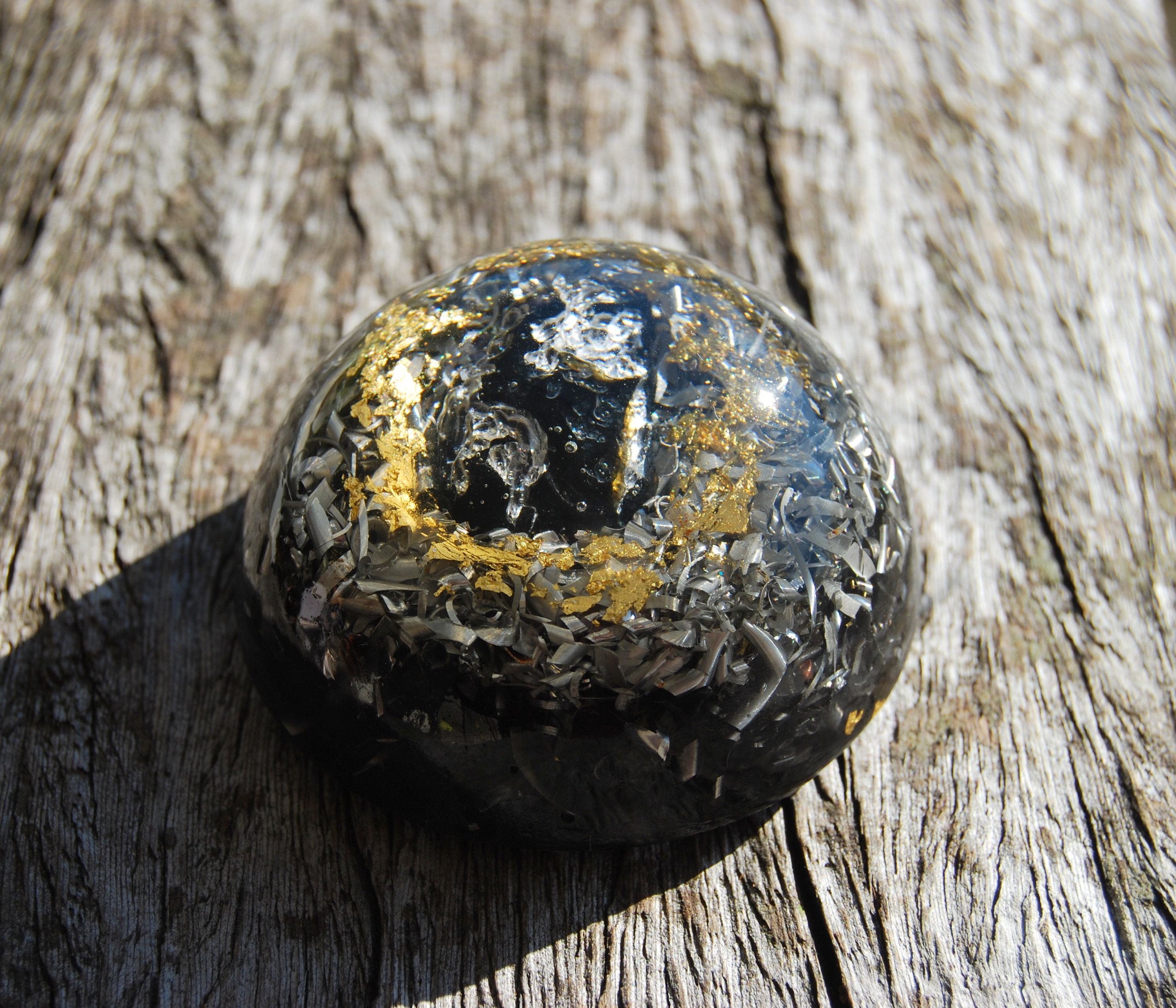 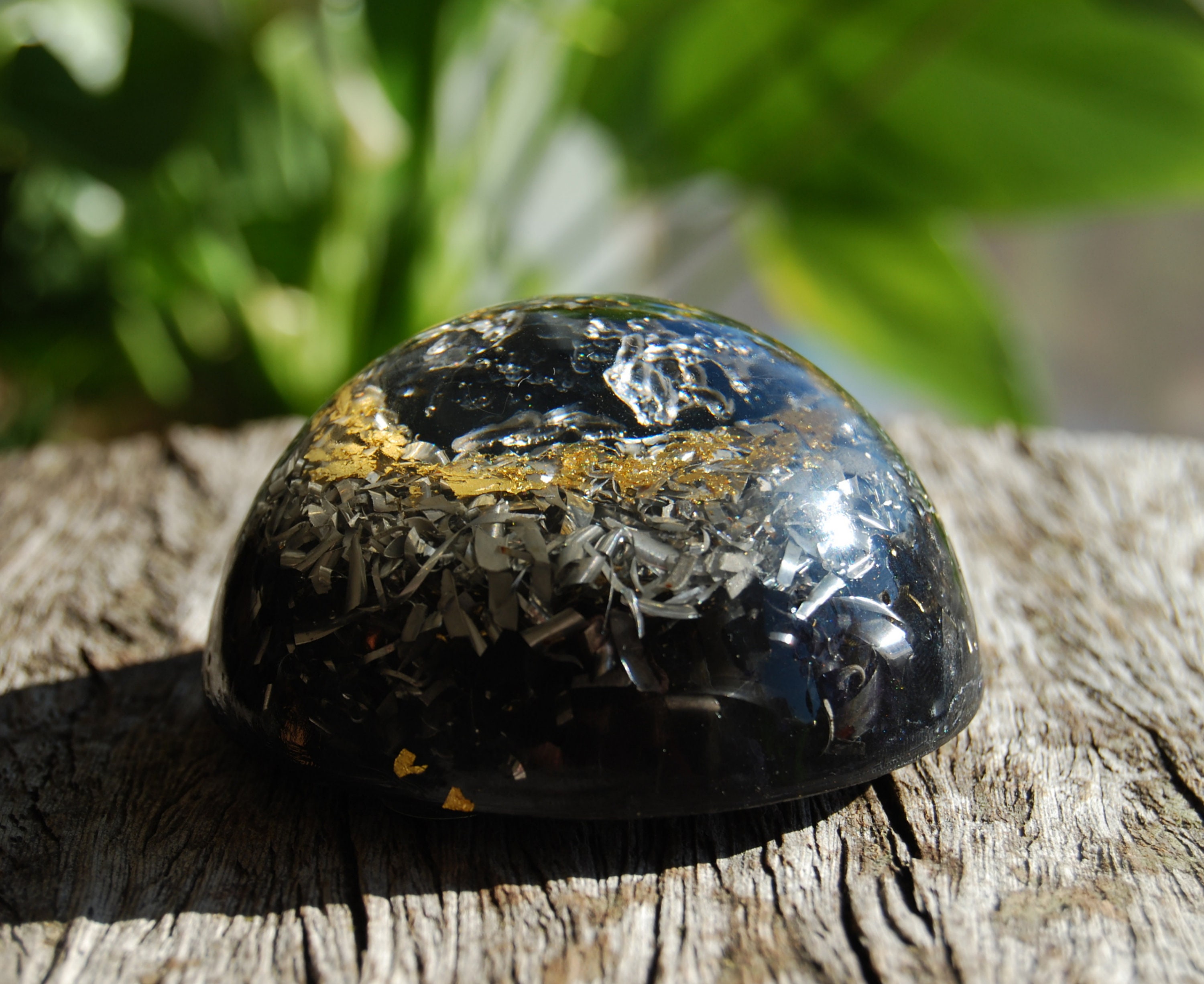 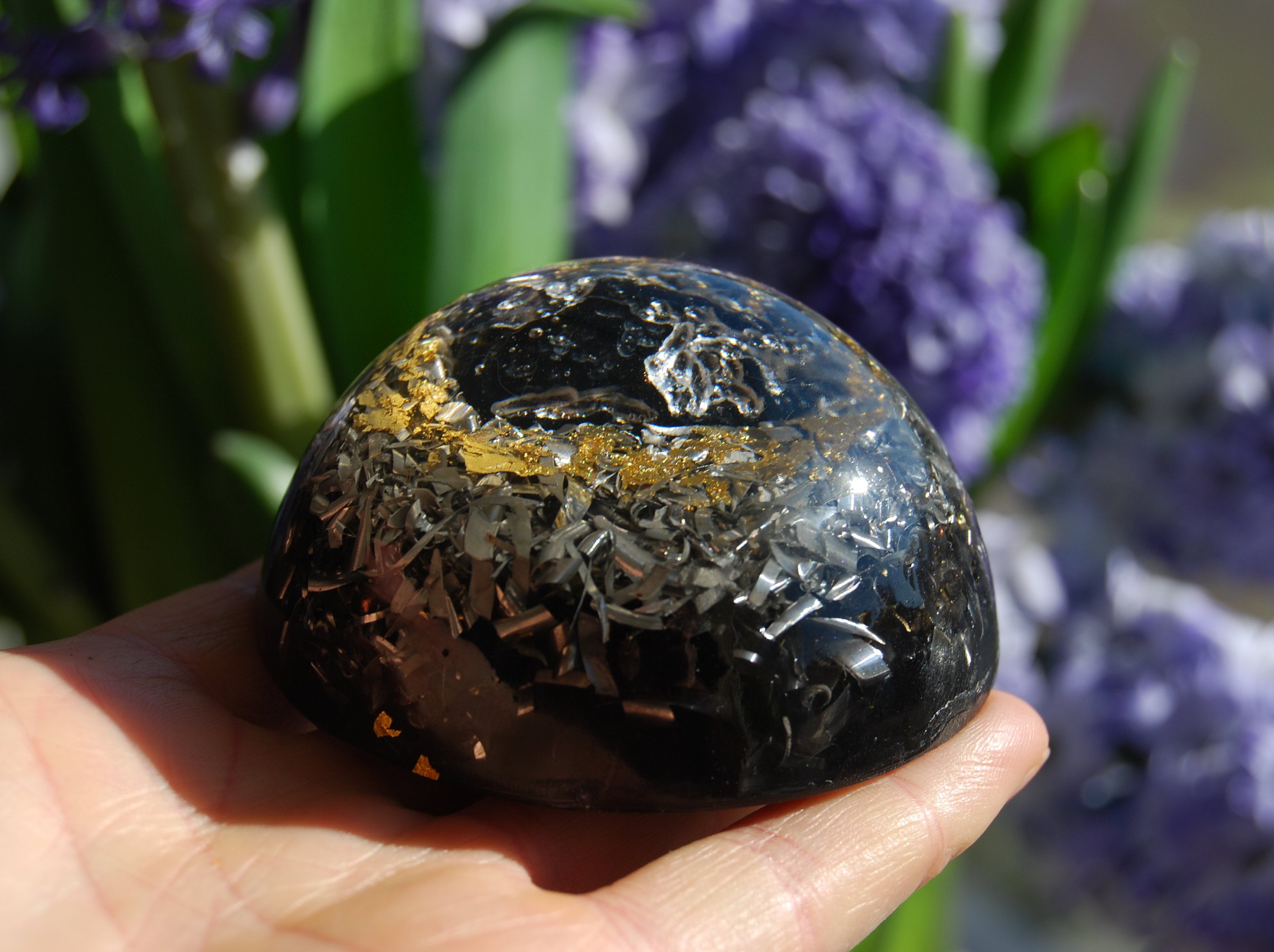 This powerful dome shaped orgone generator® consists of four natural terminated clear quartz crystals in the bottom positioned on all four wind directions for extended energy flow range to all sides. Recharges itself ! It has a natural large untreated Tektite in the top which is the main stone.

It consists of aluminium, brass, bronze and copper shavings and 24K leaf Gold. It furthermore contains Rose Quartz (self love), one Rhodizite crystal (to amplify), black Tourmaline (to ground and protect), Pyrite (to enhance and deflect ELF (extremely low frequency) waves), Selenite (to charge and clean), Shungite (to protect) and clear Quartz (for piezo electric effect) all within a durable polyester resin setting.

An Orgone generator® can be used to improve the energy practically everywhere.

This Orgonite® dome is made with intuition, love 💖 and is created with loving intent to transform people’s lives for the better. Because it is a one of a kind hand-crafted one, it may have slight artistic imperfections.

A Tektite is a rare natural glass formed when an asteroid strikes the Earth. Tektites can be found at at least five widely separated locations on the Earth. Not everything about how the glass forms is fully understood adding to the charm and mystery of this rare material. And for clarification, a tektite is not a meteorite.

The energy of Tektite are very strong and can be felt by those that are highly sensitive to the energies of crystals. Placing a Tektite inside, or underneath, a pillowcase can deter negative entities. It is also said that this stone helps connect personal thoughts and energies with extraterrestrials from other planets

The energy of Tektite is able to increase energy and is known to strengthen the aura, raise one’s vibrations and clear energy blockage within the lower Chakras. This makes it a great stone for anyone seeking spiritual advancement. Tektite also has the advantage of increasing energy, which makes it great for charging other stones, or objects. However, it is Tektites direct connection to the Universe that grants it the ability to add power to any type of magic.

The more a person works with Tektite the stronger its abilities will become. Therefore, the strength of the connection between this stone, and the person, is determined by its time spent in that person’s energy field. The longer it resides there the stronger the connection will become. The benefits of allowing for a strong connection with this stone can be shown by its ability to increase psychic sensitivity, astral travel and lucid dreaming, along with the possibility of thinning the veil between dimensions. Meditating with Tektite is known to bring one to a higher state of consciousness beyond current limitations.

Tektite has this healing vibration that is helpful in increasing the vibrations of human beings. As it works on the clearing of the lower Chakras it can bridge a link that connects them with the higher Chakras, which will facilitate the free flow of energy throughout the subtle bodies. It also enhances and accelerates healing from illness and injuries. People suffering with depression can also benefit from the healing energy of Tektite.

Because it is a one of a kind hand-crafted one, it may have slight artistic imperfections .

Will be shipped with Trackingnr. I aim to use mostly recycled materials for my packaging.