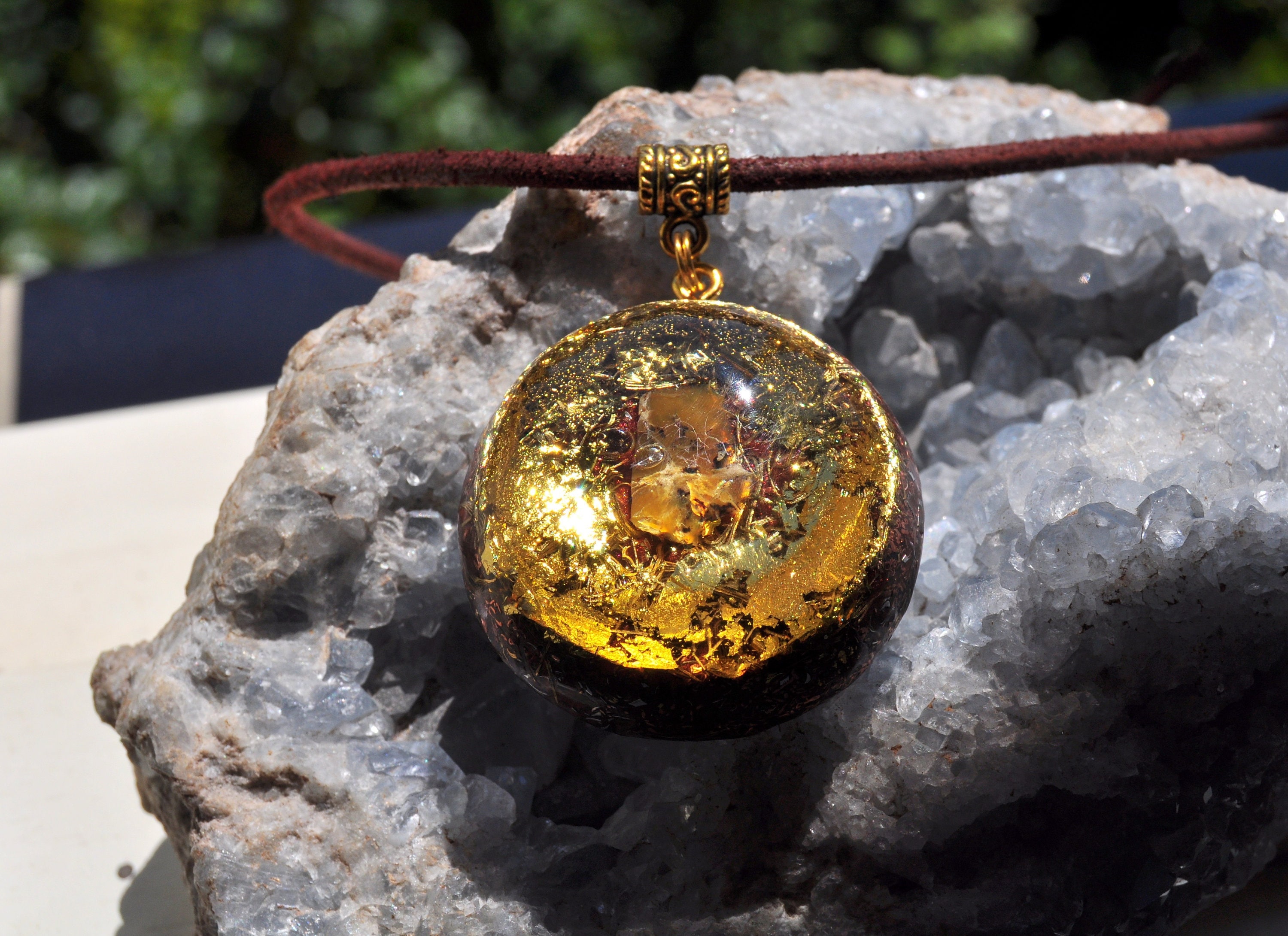 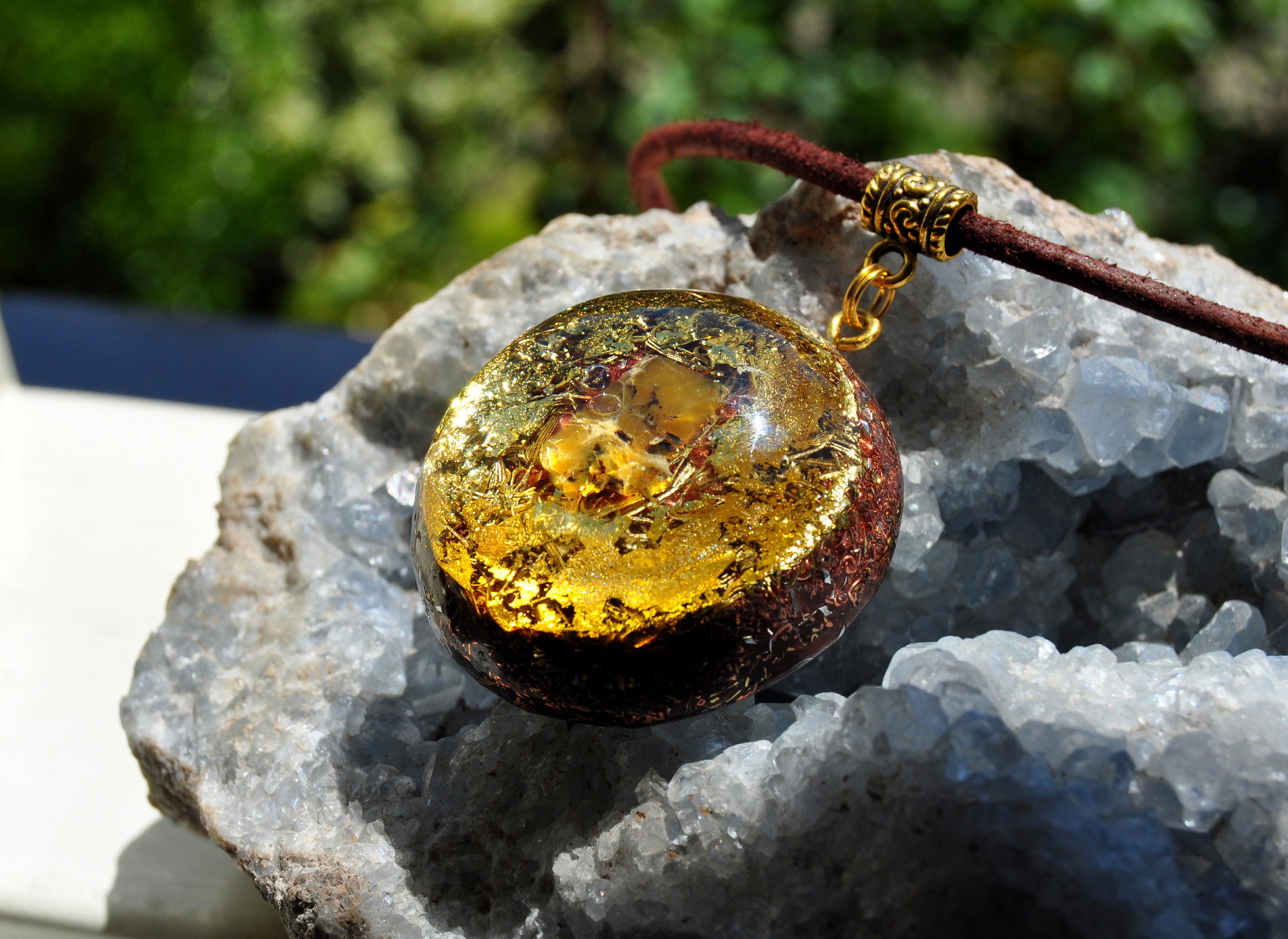 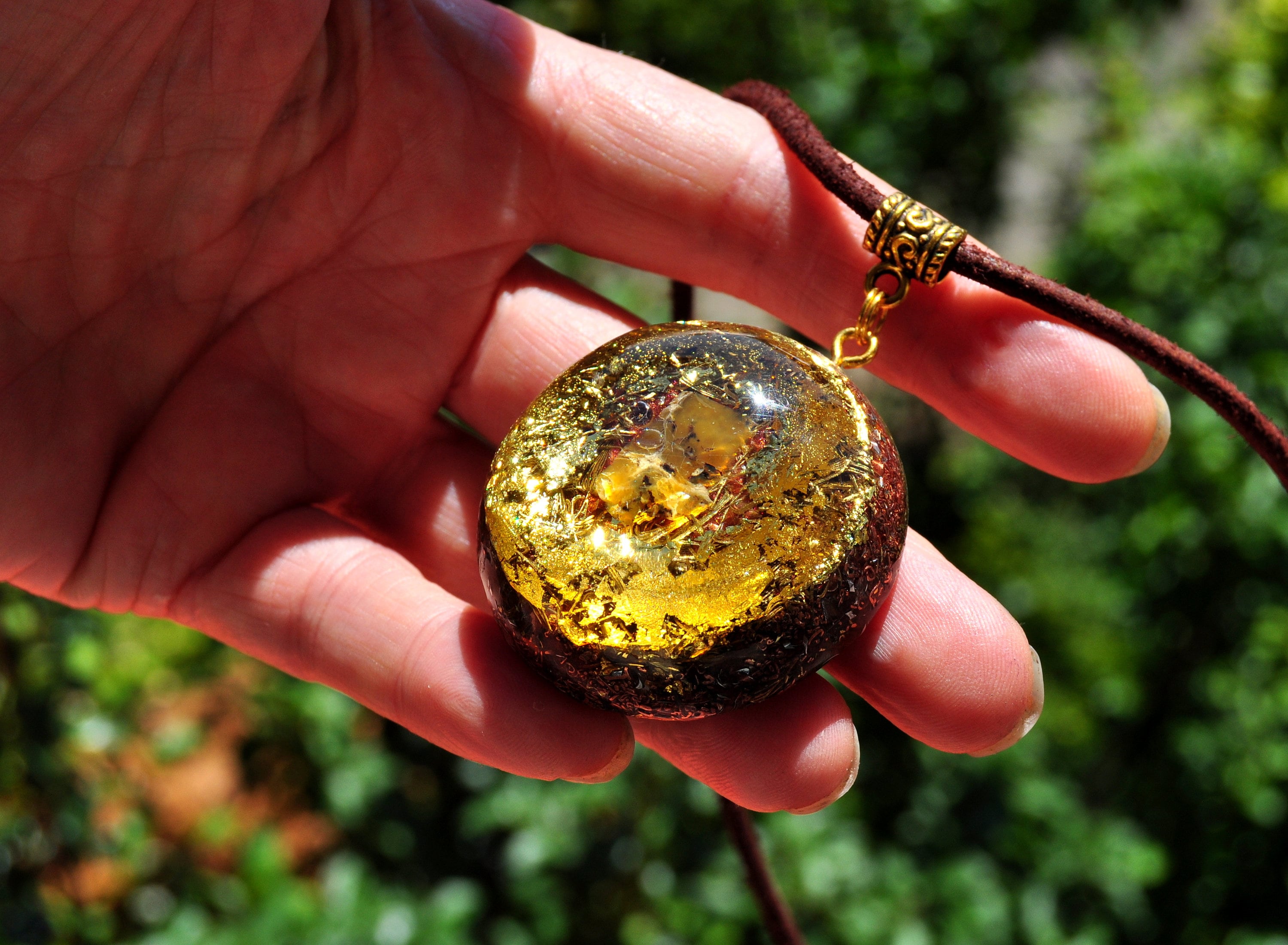 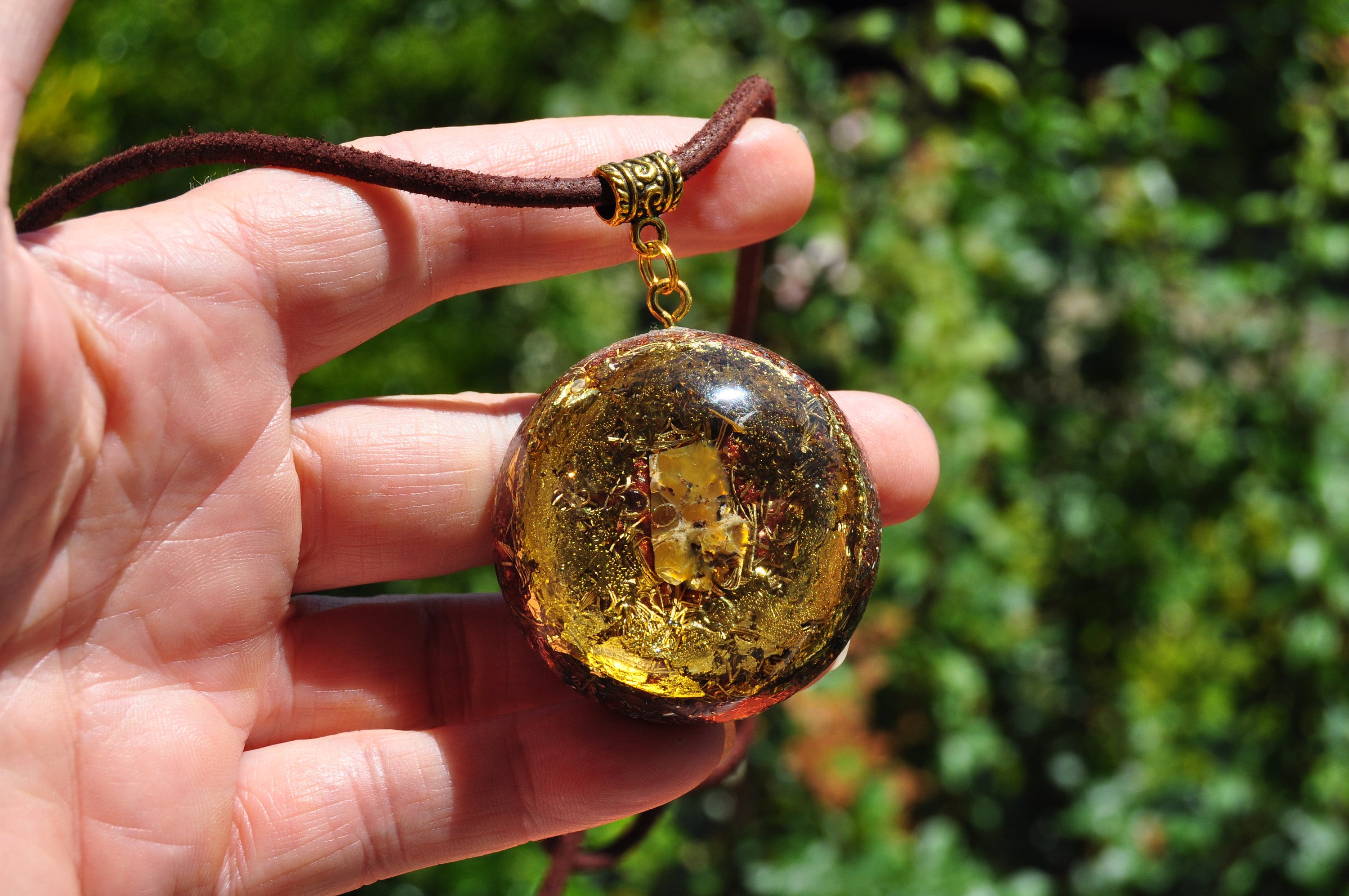 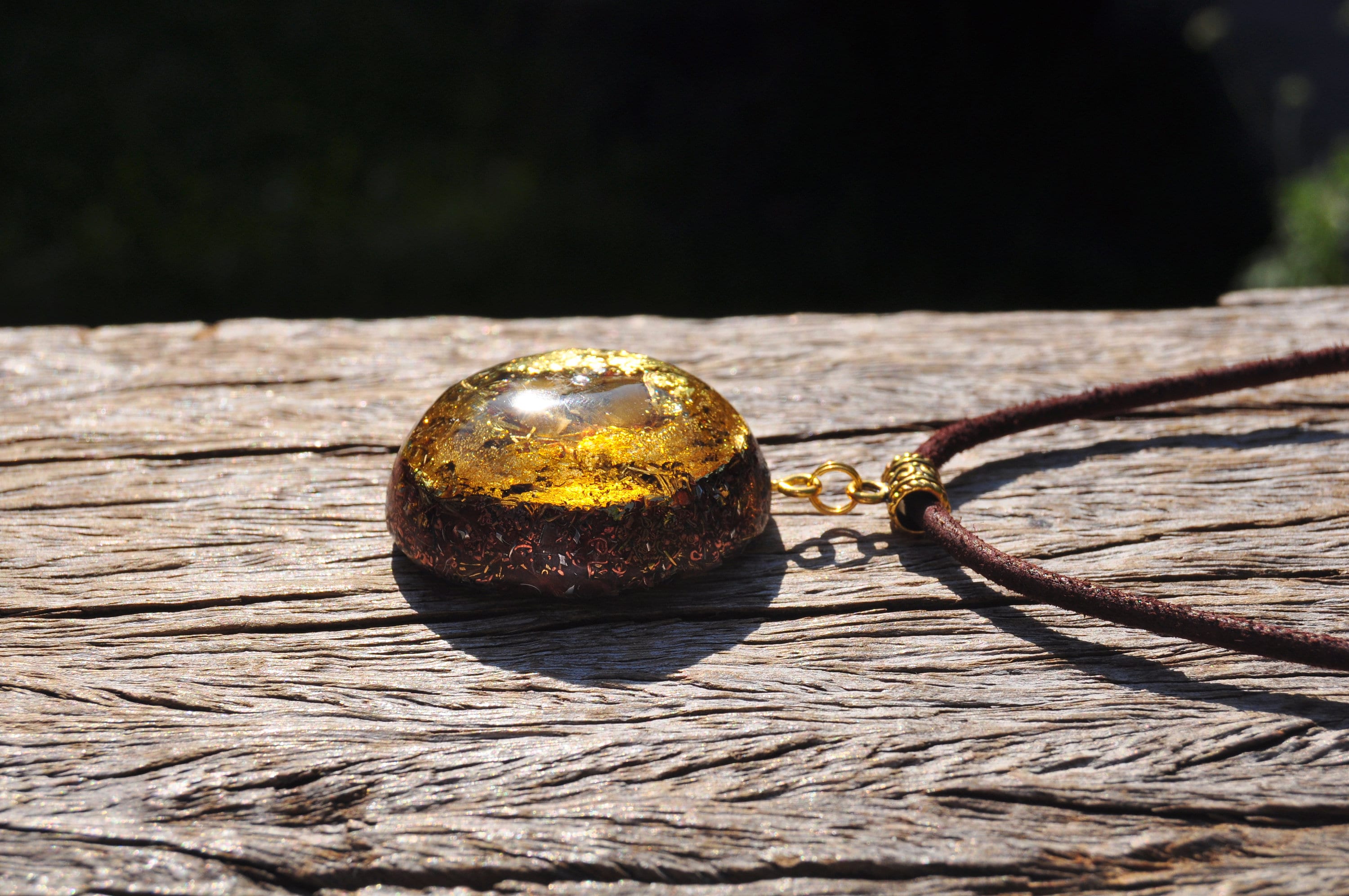 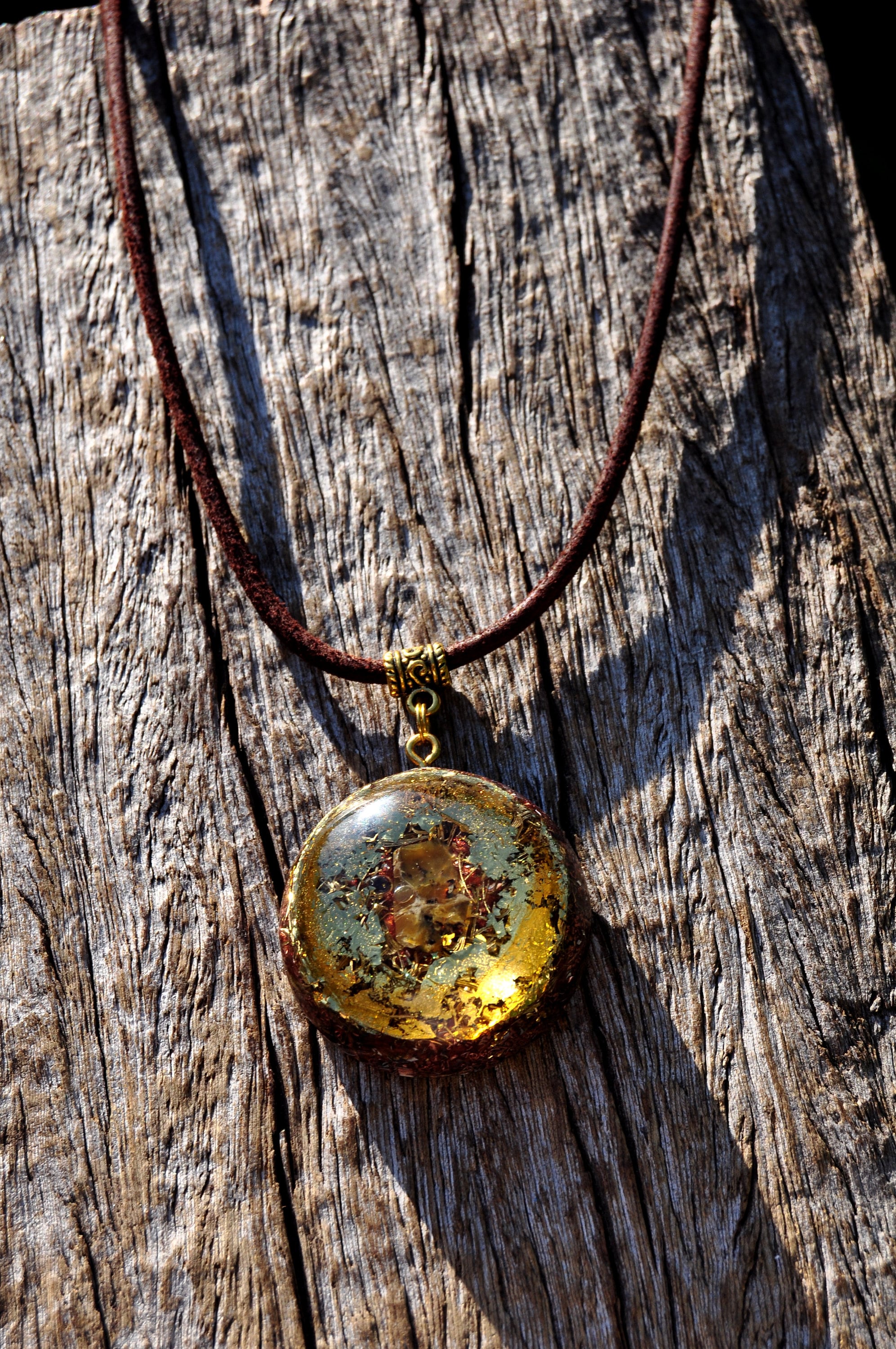 This unique 4.1 cm / 1.61" in diameter pendant is made out of lots of various metal shavings and features a raw golden Honey Opal which is surrounded with 24k Gold and furthermore it consists of Rose Quartz (self - love), black Tourmaline (to protect and ground excess energy) , Elite Shungite (EMF protection), Selenite (to clean and charge the other crystals), Rhodizite (to amplify the other crystals) and clear quartz (for piezo-electric effect) all within a durable resin setting.

Opal is most known for its ability to bring one’s traits and characteristics to the surface for examination and transformation. Just as Opal absorbs and reflects light, it picks up thoughts and feelings, desires and buried emotions, amplifying them and returning them to the source. While magnifying one’s negative attributes may prove to be uncomfortable, it allows for understanding how destructive these emotions can be and assists the process of letting them go. Opal also illuminates the positive actions and emotions of the self, enhancing the good and true, and fostering one’s highest potential.

Opal is a marvelous vehicle for bringing spiritual Light into the aura, awakening the psychic and mystical qualities of one’s being, enhancing cosmic consciousness and raising one’s level of intuition and insight. It has been traditionally used to invoke visions, increase lucid dreaming, and as a protector and shamanic guide in journeying deep into the self for healing or in past-life regression.

Honey Opal enhances visualization and can take its keeper on mystical and magical journeys beyond the physical world. This is a stone that puts its keeper in touch with cosmic consciousness, holding the physical existence back enough for exploration to go ahead. This is a stone that enhances the imagination, opening many areas connected to it such as creativity. Yellow Opal encourages its keeper to see the bigger picture and imagine past the present. It is a stone that help turn dreams into reality. Honey Opal picks up and records its keeper thoughts and feelings then carries them out to where they are needed most.

This stone can help its keeper to turn negative thought into positive thought. Honey Opal stirs up the spirit; it lifts the mood and lightens the heart. Honey Opal helps its keeper to see that what one puts out, eventually can come back. It is a stone that brings a recognition of how its keeper can help themselves by being more positive in different ways, while also helping its keeper to see where thought and actions have not been to good and what it has brought out. This in turn can gives opportunity for this to be learnt from and even made better not just for its keeper, but for other beings too.