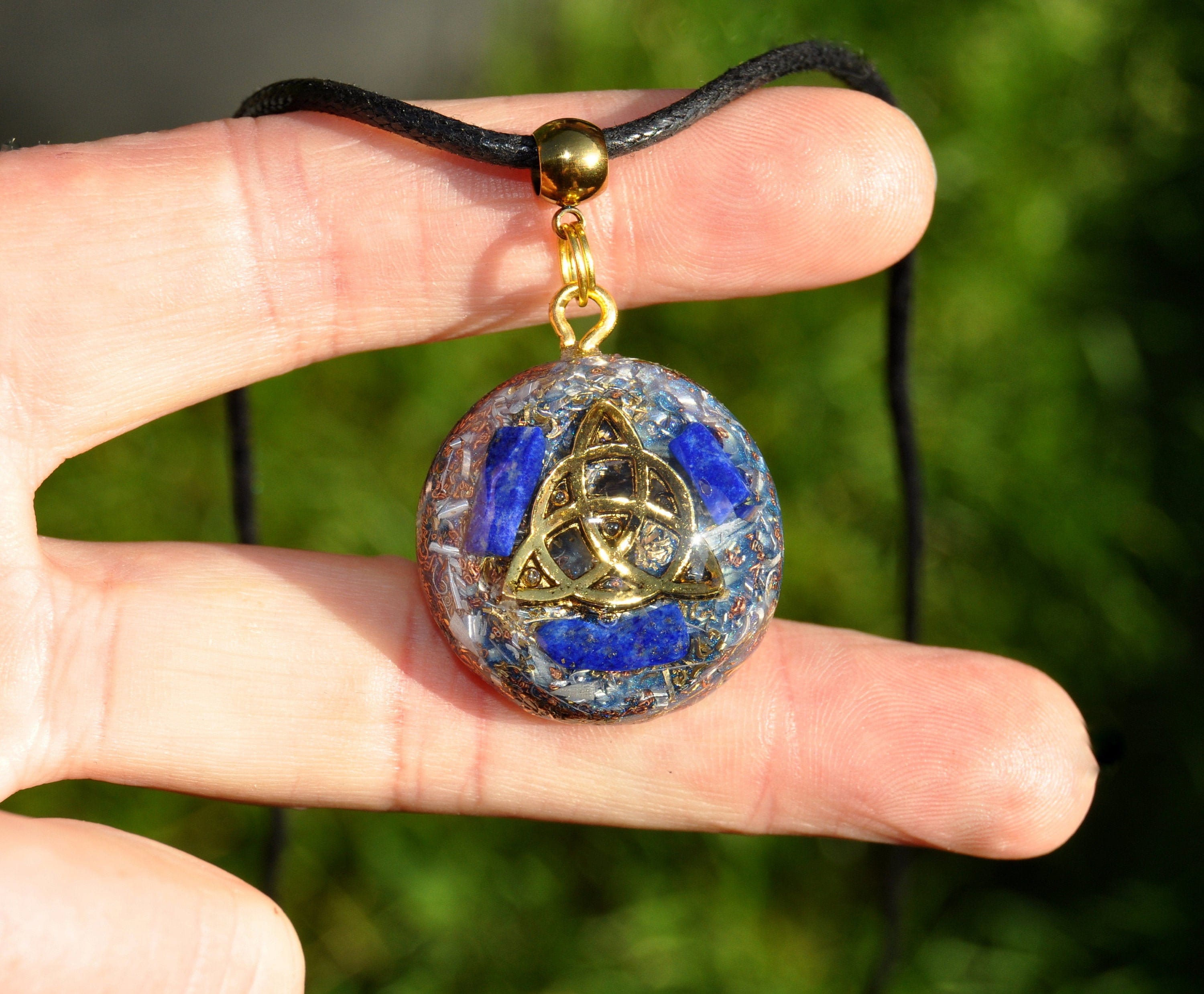 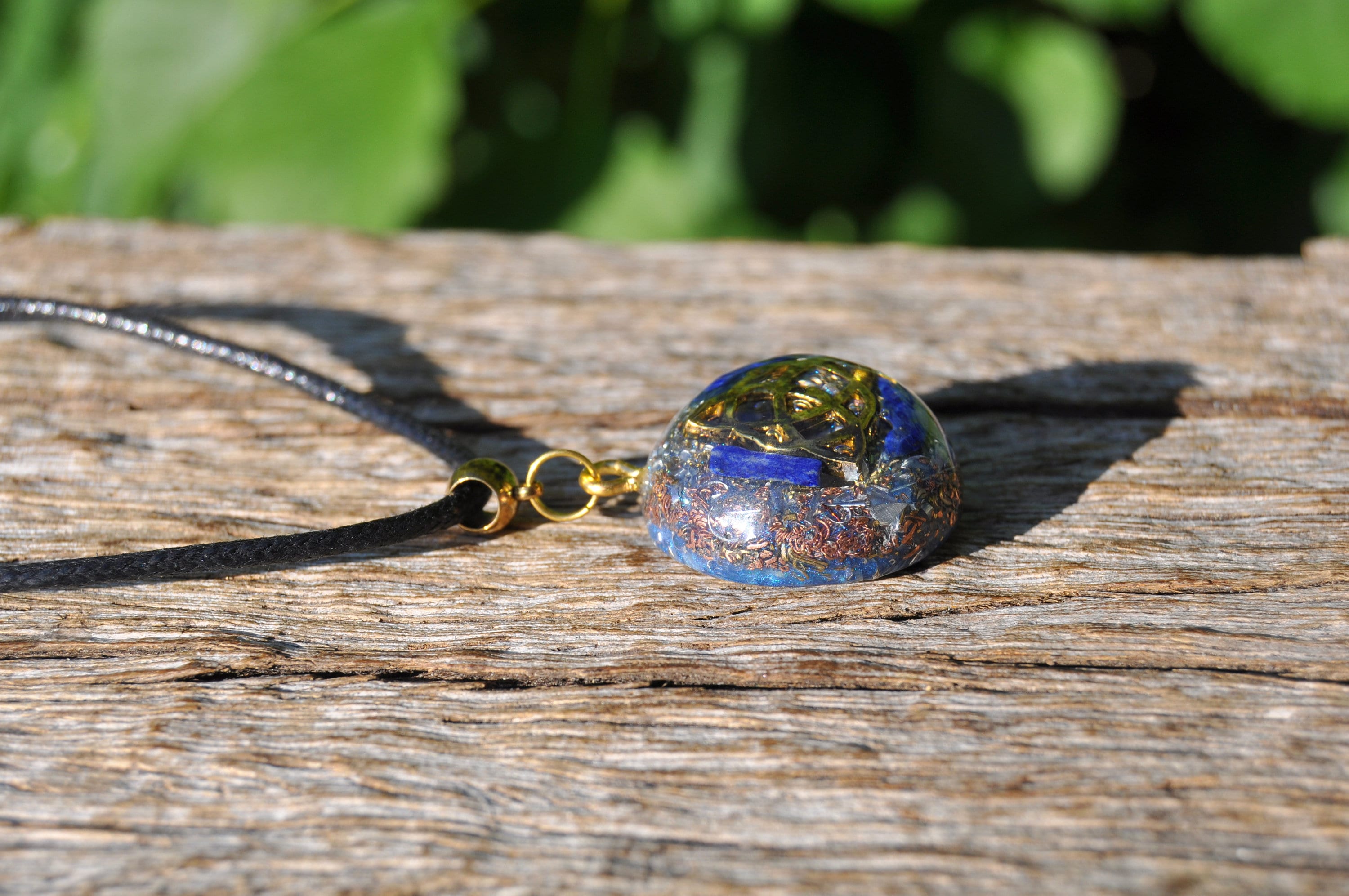 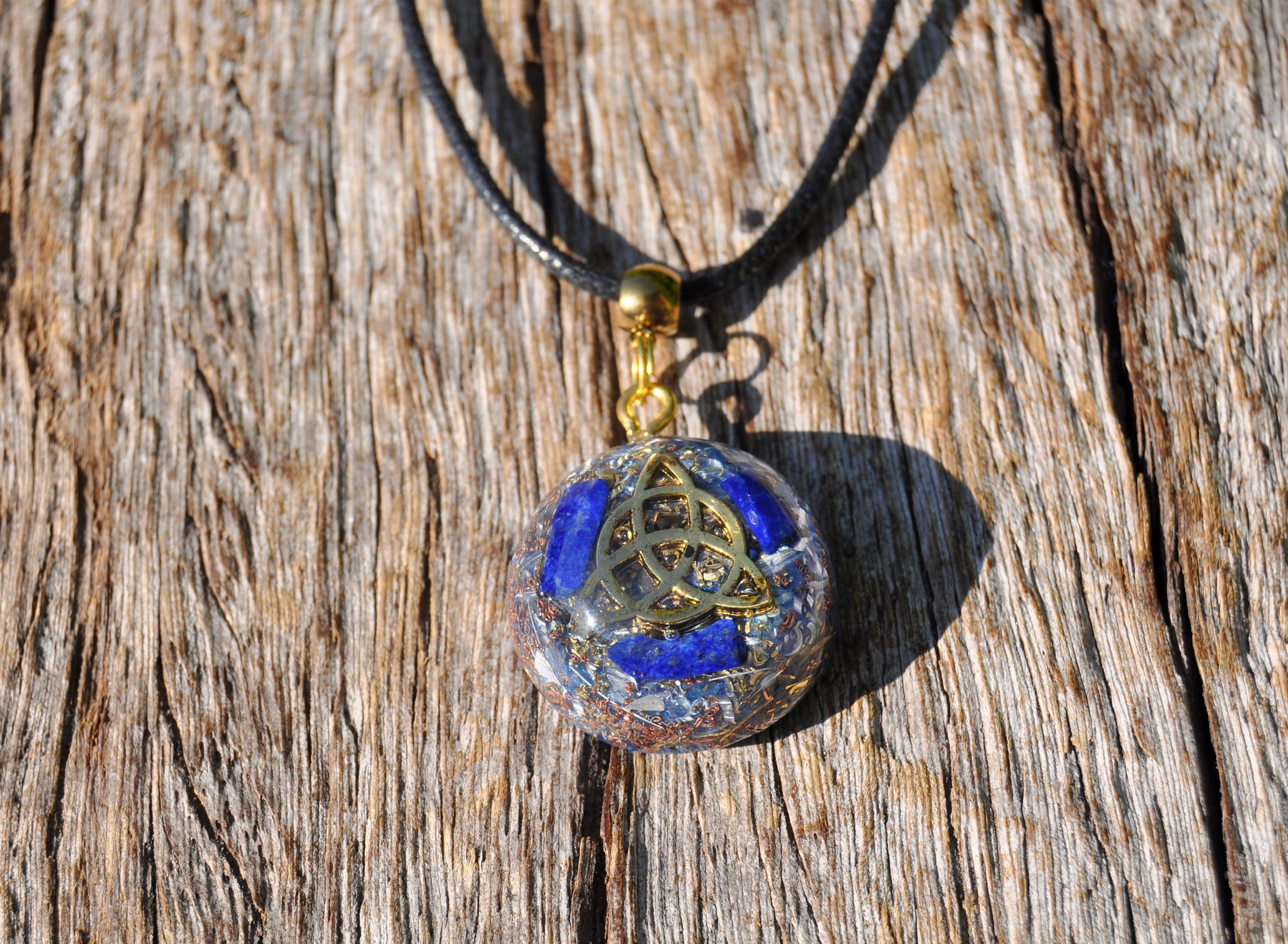 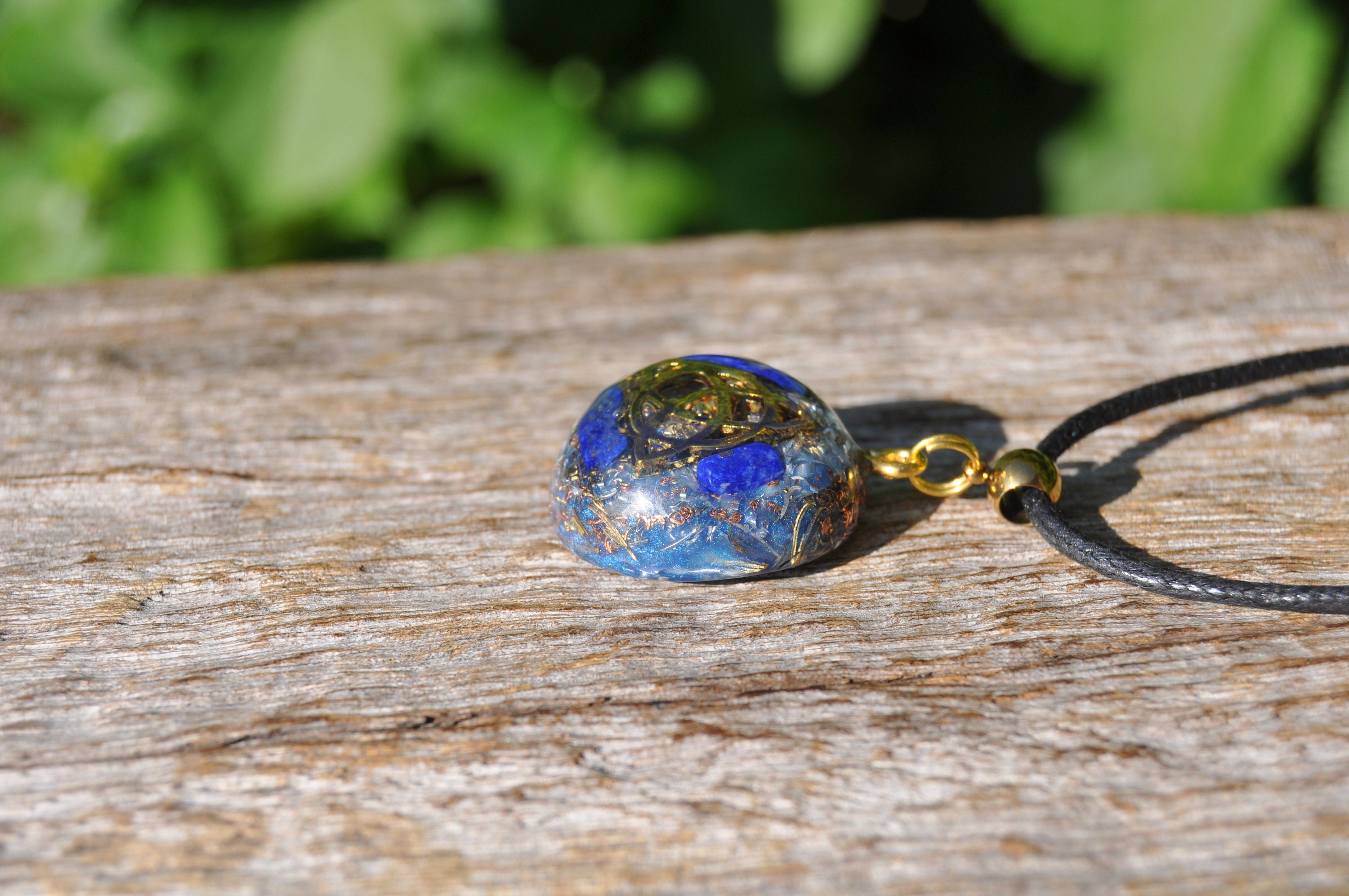 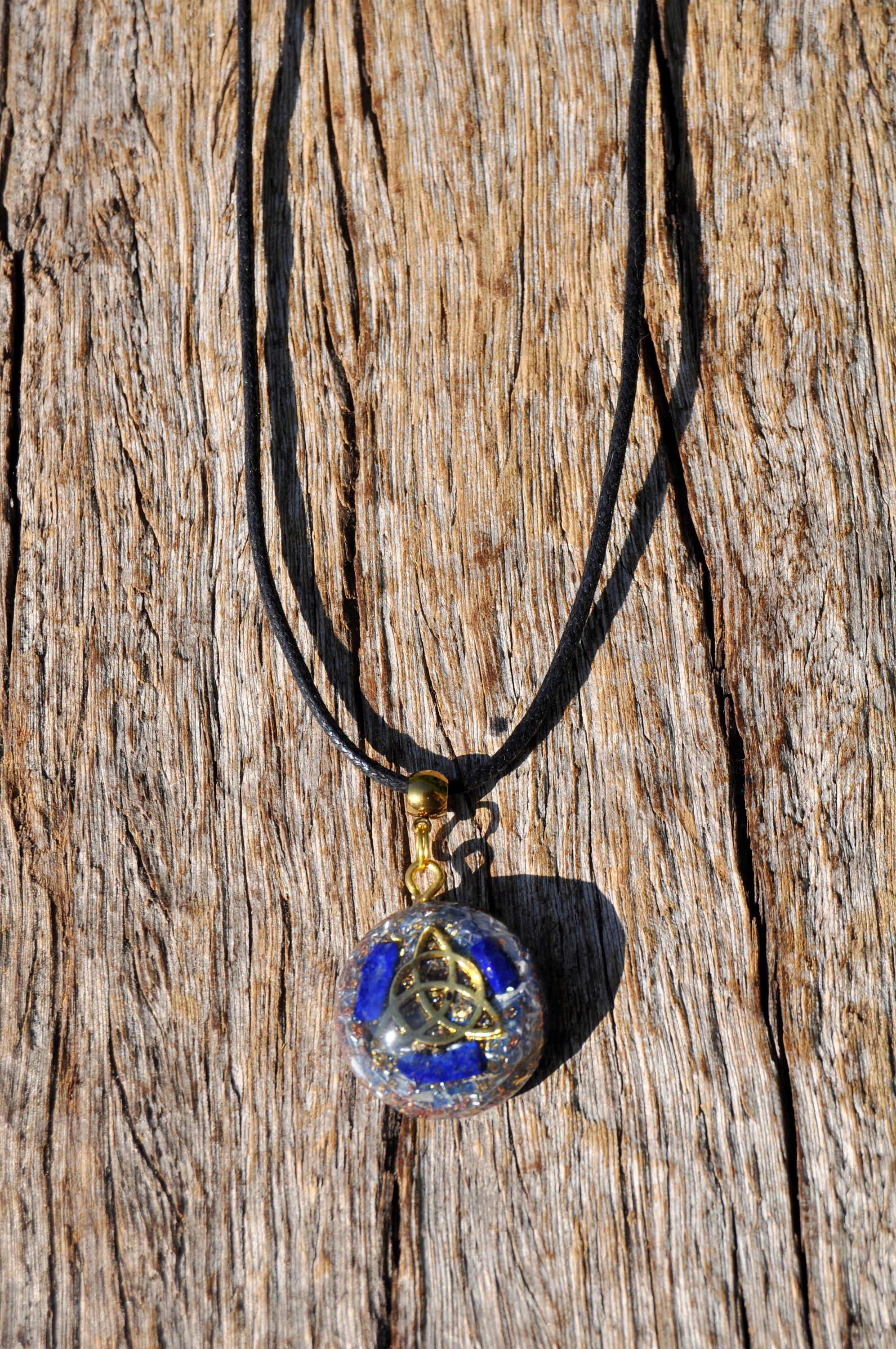 It is based on 50/50 ratio ( at least 50% metal shavings/50% resin) which is required for the orgonite to properly work according to Wilhelm Reich's research. The more metal shavings, the better !

The pendants features a metal Triquetra symbol in the front.
🎆TRIQUETRA 🎆

The Triquetra is constructed of one continuous line interweaving around itself symbolising no beginning or end, an eternal spiritual life. Triquetra means “triangle” or “three” (tri-) “cornered” (Quetrus). It is made up of three intersecting vesica Pisces. The Vesica Pisces is the shape created by the intersection of two congruent circles.
A triquetra symbol is sometimes interlaced with a circle such as in the symbol in this pendant.

An ancient Celtic symbol, the triquetra is considered one of the oldest; dating back to as early as 500 BC when it was used to symbolize the triple goddess (maiden-mother-crone). Over the centuries it has become the symbol for the Holy Trinity among Christians in Ireland. The symbol is often used to represent the 3 fundamental elements – air, water, and earth or the infinite cycle of life. It is also known as a rune of protection.

In modern times, the Triquetra symbol has become a favorite design element in knot-work, jewelry, emblems, logos etc. as a symbol of anything three-fold e.g. the cycle of life (life-death-rebirth), the promise of a husband to his wife (love-honor-protect), the family (father-mother-child), the passage of time (past-present-future) and many more. The circle that is often interlaced with the triquetra represents the bond between the three elements.

The main function of orgonite® is to clean stagnant and negative energy.

Because it is a one of a kind hand-crafted one, it may have slight artistic imperfections.
It comes on adjustable cord.
Appr. Size:
2.7 cm/1.1 inch in diameter