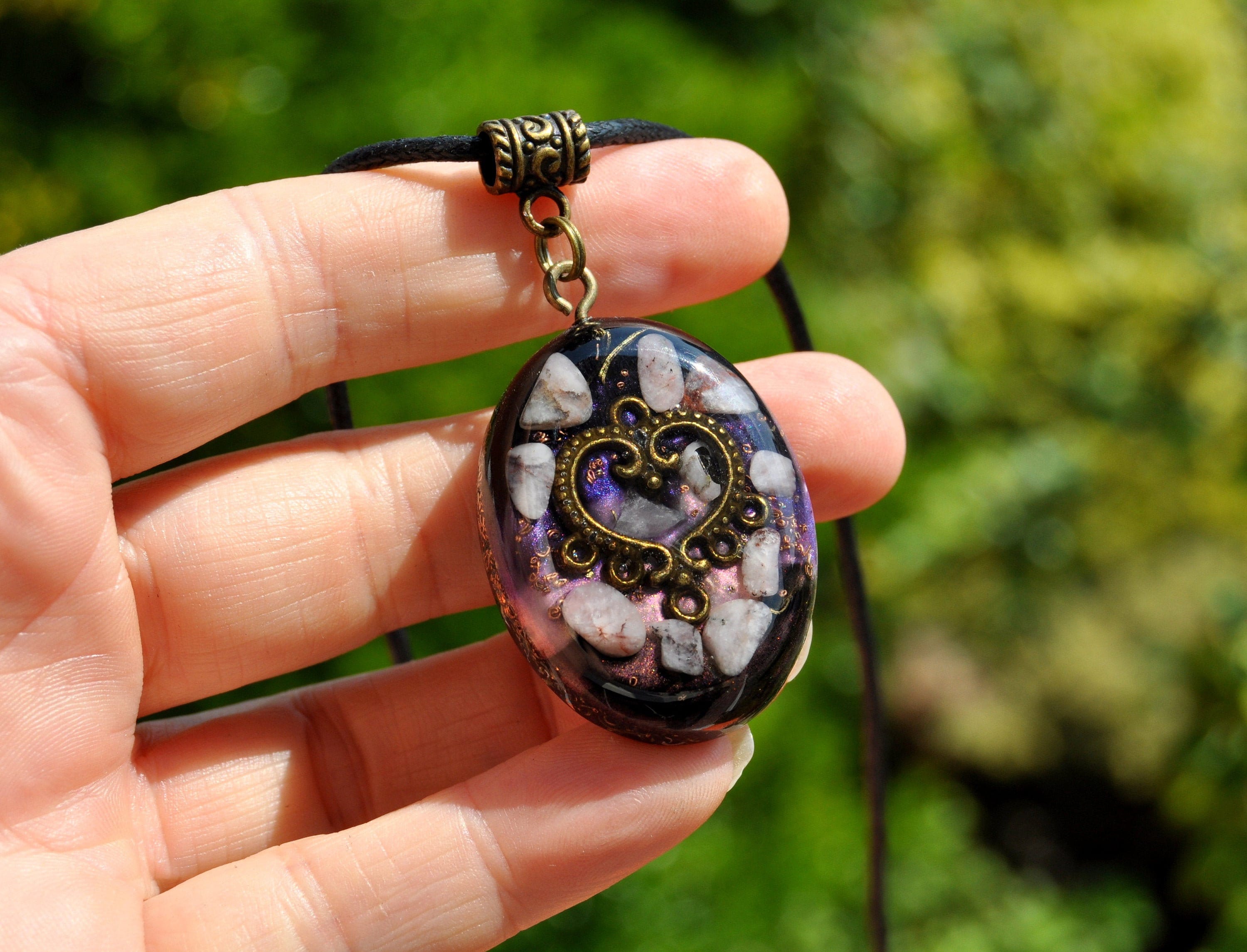 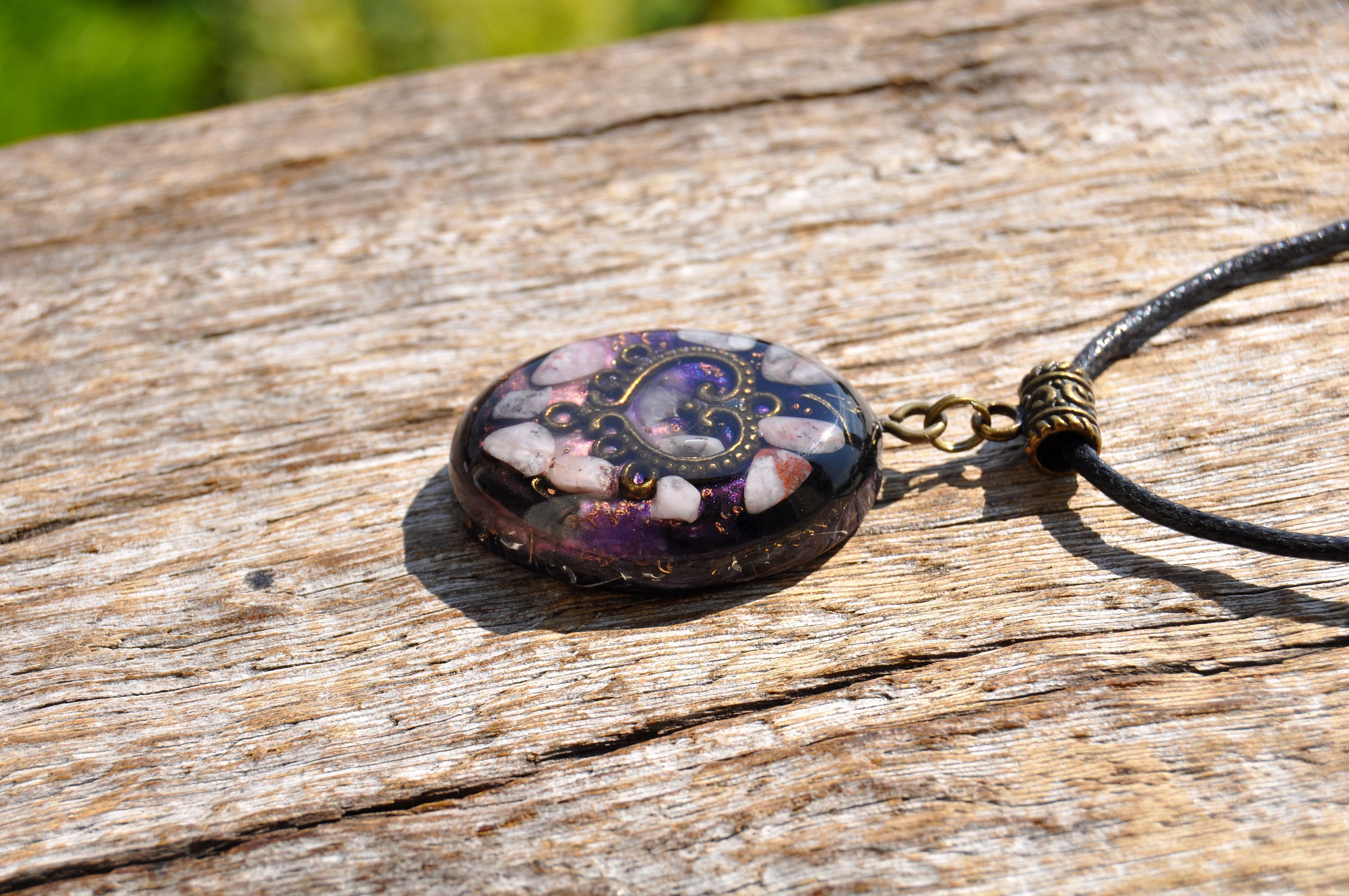 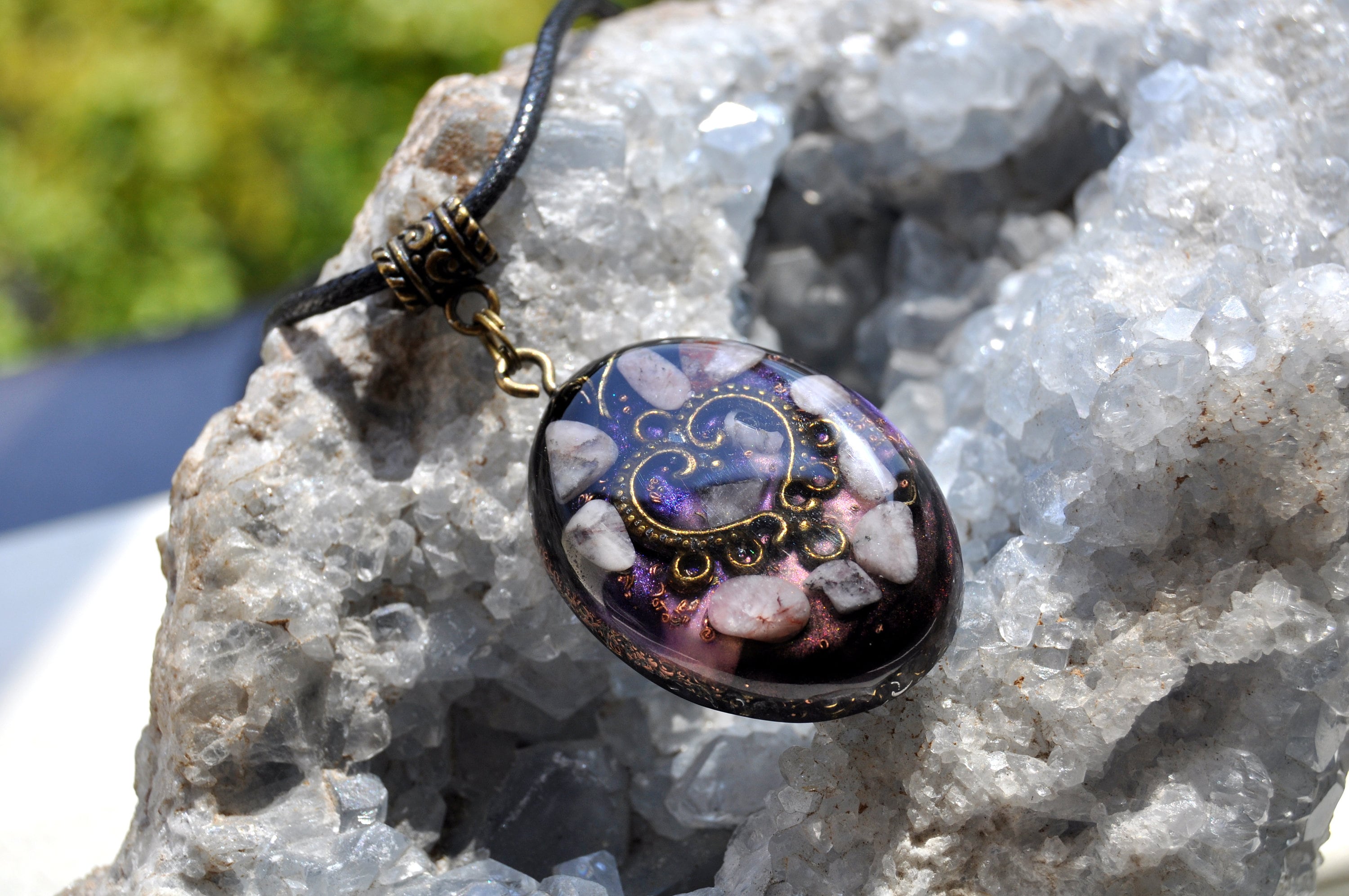 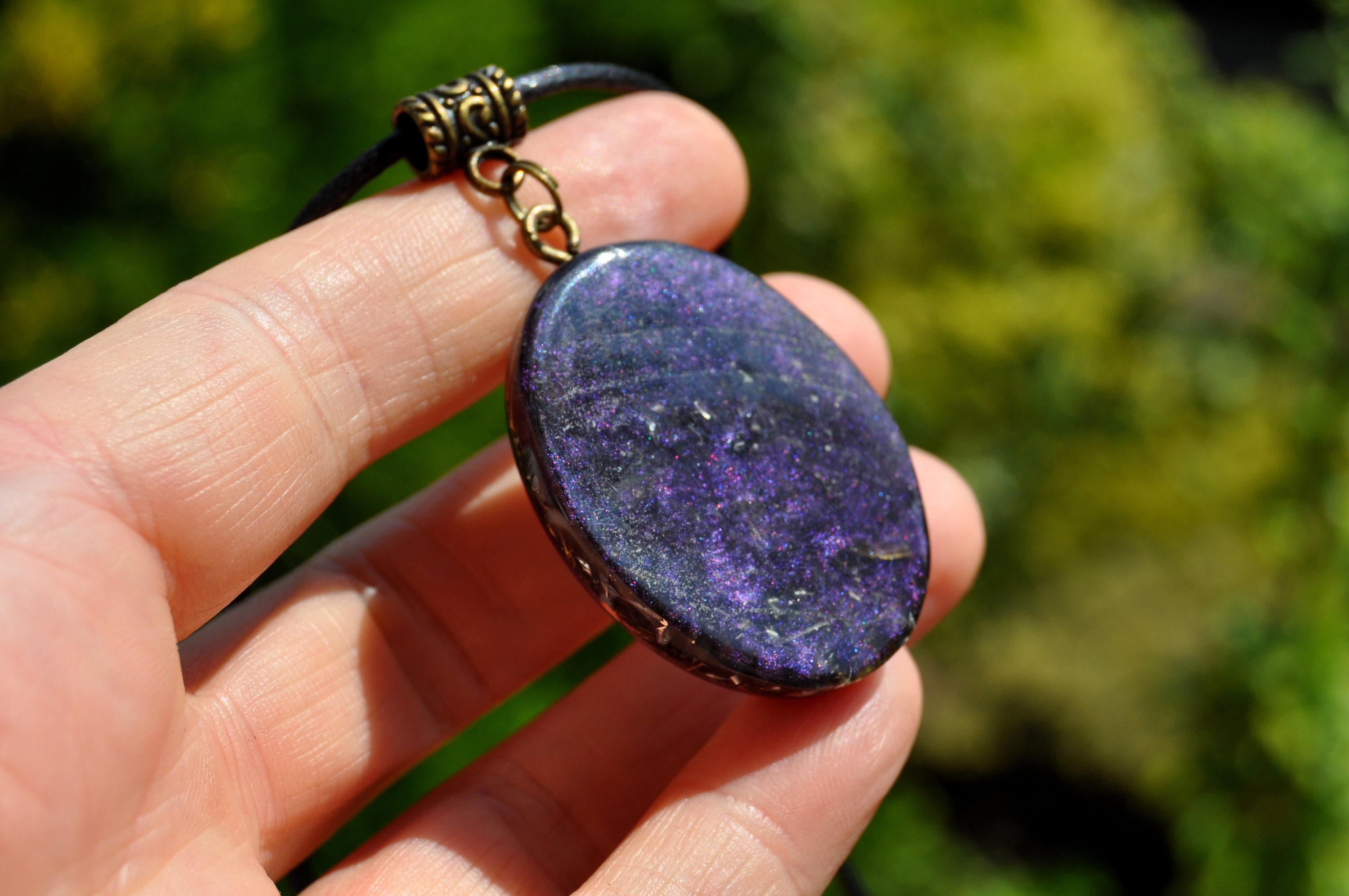 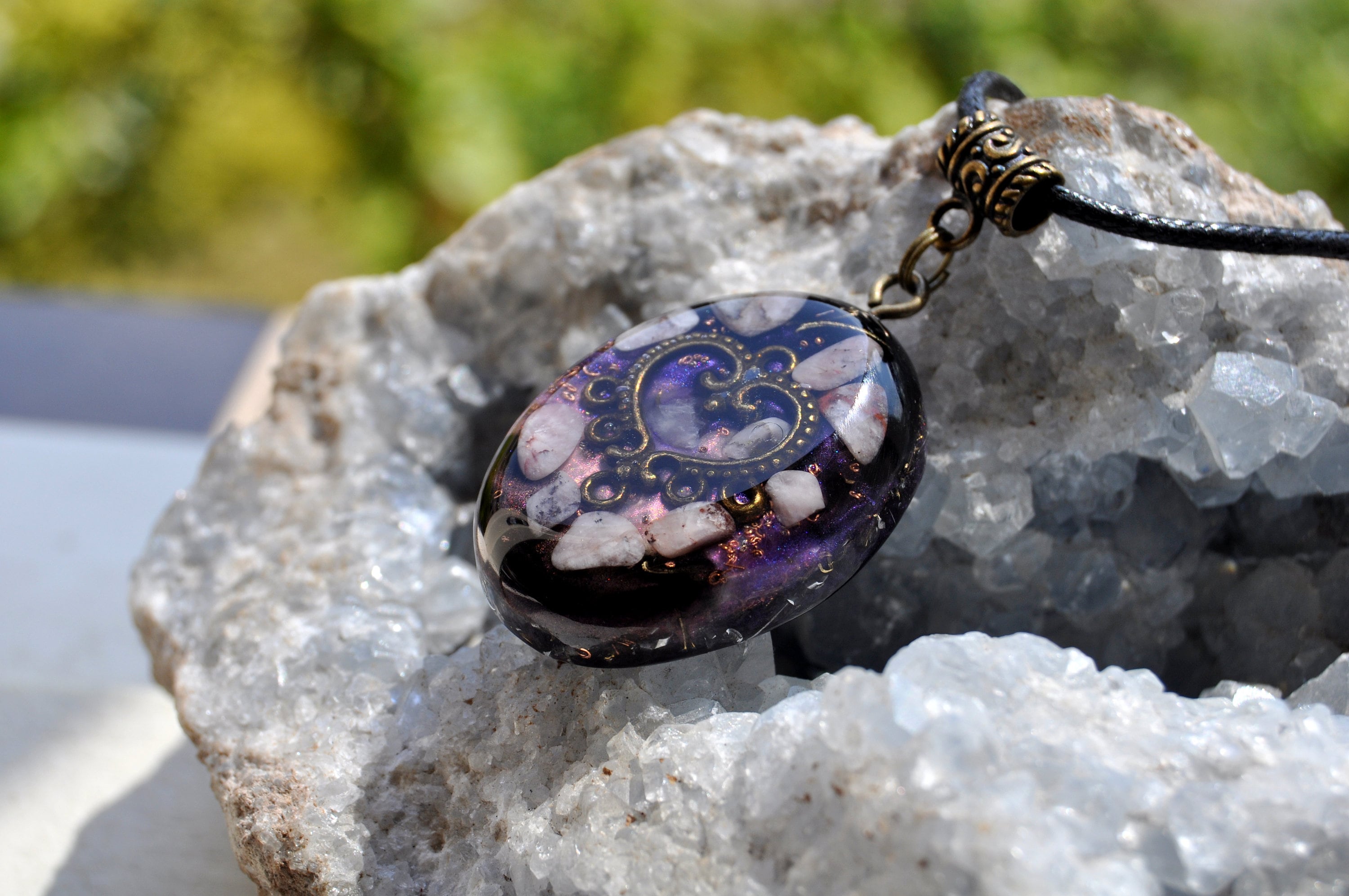 This lovely Orgonite® pendant contains lots of metal shavings and features a decorative heart symbol surrounded with Strawberry Quartz.
The pendant furthermore consists of Pyrite (to enhance), black Tourmaline (to protect and ground excess energy), Rhodizite (to amplify), Elite Shungite (emf protection), Selenite (to clean and charge other crystals) and clear quartz (for piezo electric effect) all within a durable resin setting.

The core Strawberry Quartz meaning is that this is the stone of universal love and purpose. The energy that radiates from the blushing pink crystal embraces you in nurturing love. Even in the darkest of times, it reminds you of the transformative power of love and all that it can do.

In metaphysical healing, Strawberry Quartz has tremendous sway over your auric field. Like other popular healing crystals, it radiates with specific energy points throughout the body. In this case, these metaphysical properties are most-felt in the heart and root chakras.

The heart chakra is the center of many core emotions. It’s said to govern your feelings of compassion, empathy, forgiveness, and most importantly, love.

Without proper energy flow through the heart chakra, you can become jaded and disconnected from those around you. You might feel that you have a hard time opening up, resorting to feelings of jealousy or blind rage instead.

The meaning and metaphysical properties of Strawberry Quartz opens your heart and pushes you to let love flow in and out! The crystal is fantastic for relationships. Not only does it strengthen your existing ones, but it’s said to make you more open to others.